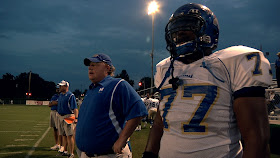 This is the kind of story that one could easily imagine Hollywood turning into an inspiring movie. Undefeated is the study of a no-hope football team, full of young players beset by emotional, cultural and academic obstacles, and led by a coach driven by nothing more than his bottomless passion for the game. Over the course of one season, the Manassas Tigers are transformed from the state's whipping boys to a team fighting for the championship, and their resilience in coming back from behind on so many occasions is testament to the self-belief that coach Bill Courtney instils in them. Undefeated follows this team across a perfect narrative arc – it even has a climactic match that finishes in a nailbiting fashion.

But this is a documentary, not a fiction, and the young men who take to the field to represent their school are real people facing uncertain futures. "For most coaches, that would be a career's worth of crap to deal with," Courtney says, as he recalls having to deal with players fighting and getting shot or arrested, "I think that sums up the last two weeks for me." Courtney is a volunteer coach who has been taking charge of the Tigers for the past six years, devoting an extraordinary amount of time to the students in his care, often at the expense of his own four children. He also runs a lumber business but he would give it all up tomorrow to coach full-time if he could. He's a good man who really wants to make a difference, and he's more than a coach to the Manassas Tigers players; he's a mentor, a confidant, a friend and a father figure, even as dealing with these teens often drives him to exasperation. "This isn't part of the job description" he complains as he drives out to a player's home, before admitting that he doesn't really know what the job description is anymore.

Undefeated focuses on three members of the team, each of whom have a story to tell. Chavis is a young man with an explosive temper whose inability to control his emotions has landed him in jail; Montrail – nicknamed "Money" – has lost his father and faces injury problems; star player OC wants a football college scholarship but his grades aren't up to scratch. Through their experiences, the film's co-directors Dan Lindsay and TJ Martin attempt to paint a portrait of a whole generation of young men, whose prospects look bleak in a town decimated by the closure of its main tyre plant. For most of these boys, football is the only route out, but not everyone can make the grade and we are left wondering what happens to those who are left behind. Undefeated's narrow focus is perhaps necessary, but a young man being offered a college scholarship out of the blue is the exception, not the rule, and there are so many questions lingering in the background of this story.

I don't know if Undefeated could have addressed the full complexity of such issues, as the first half of the film does already feel a little sluggish and unfocused. It improves immeasurably in the second half, however, as the team drives towards its playoff game and the directors succeed in drawing us into the drama. A knowledge of American football is not a prerequisite for being affected by Undefeated, as the raw, heightened emotion of the last half-hour is likely to breach the sturdiest audience defence, and the film captures a couple of moments in particular that knocked the wind out of me. In these moving sequences we can see boys becoming men, drawing strength from both their successes and their failures, and repaying Coach Courtney's faith in them. "You think football builds character. It does not," he tells his players, "It reveals character." Whether they will have the character, strength, discipline and good fortune to survive what lies beyond the events documented in Undefeated is another matter entirely.
Philip Concannon
Share
‹
›
Home
View web version