Review - The Forgiveness of Blood 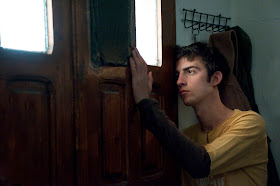 The path cuts across a sparse field, its entrance blocked by stones. It doesn't look like much, but this site is the catalyst for a feud that tears a family apart in The Forgiveness of Blood. When Mark (Refet Abazi) finds his usual route blocked, he takes issue with his neighbour Sokol, who now owns the land that once belonged to Mark's family. The feud escalates between the two families, and within a couple of days Sokol is dead, while Mark has disappeared and his brother Zef has been arrested for murder. I should mention at this point that The Forgiveness of Blood takes place in a remote village in northern Albania, and it is a place where people take justice into their own hands.

Blood feuds may seem like an archaic tradition to many of us, but in this region they still thrive, and it has been estimated that more than 10,000 such conflicts have claimed lives of men in Albania over the past twenty years. The tradition at the centre of this film's plot is "The Kanun", which stipulates that Sokol's family has the right to kill Mark's male offspring in the patriarch's absence, so his 17 year-old son Nik (Tristan Halilaj) immediately becomes the target. With his life in the balance, Nik essentially becomes a prisoner in his own home, unable to leave the boundaries of his home until a truce has been reached. The Forgiveness of Blood explores this situation through the eyes of Nik and his sister Rudina (Sindi Lacej), both of whom feel the full weight of familial responsibility bearing down on their young shoulders.

The Forgiveness of Blood is the second film from American director Joshua Marston, who made his debut in 2004 with the Mexico-set drugs drama Maria Full of Grace. The film focused on the experiences of a teenage drug mule, and this picture also deals with youngsters forced to deal with situations that they have been thrust into by their elders. Much of the tension in The Forgiveness of Blood is drawn from the contrast between the attitudes of its young characters and the old-world society they live in. Nik is like any other teenager, he just wants to play computer games, text his friends and meet girls, but he finds himself trapped by a dispute he never wanted any part of. Similarly, his sister needs to put her life on hold to go out and become the family's breadwinner, taking on her father's bread run and facing the glares of an intimidating mans' world.

Marston's screenplay, put together with the help of Albanian filmmaker Andamion Murataj, takes a measured, low-key approach to this violent tradition. All bloodshed and confrontations occur offscreen, with Marston instead emphasising the everyday sense of threat that hangs over this family. The film is claustrophobic and compelling, with Marston crafting a film that works as both a character study and an exploration of a wider culture. At its core, The Forgiveness of Blood may follow the traditional framework of a coming-of-age tale, but the curious spirit and compassion that Marston has shown in taking us to such unfamiliar and intriguing territory makes it feel disarmingly fresh. We can only hope it won't be another seven years before this talented filmmaker returns from his travels with more stories to tell.
Philip Concannon
Share
‹
›
Home
View web version