Review - Something From Nothing: The Art of Rap 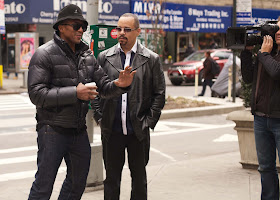 Ice-T's documentary Something From Nothing: The Art of Rap is a film that contains something for everyone. For rap aficionados, there is an extraordinary array of talent contributing to the picture, from pioneers such as Melle Mel and KRS One to modern practitioners like Eminem and Kanye West. For anyone less well-versed in the world of hip-hop music, the film is a very accessible initiation, which explains the genesis of rap music and how it has developed in myriad ways over the years. Finally, the film prompts us to readjust our perspective of the rap world, as it digs beneath the money, the glamour and the feuds that are so readily associated with rap music. It is, as the title suggests, all about the art.

This is the first feature film Ice-T has made and he wisely keeps it simple. The film consists of him meeting with a number of rappers and asking them straightforward questions, and while this approach may seem rudimentary in its simplicity, it proves to be hugely effective. Ice-T's existing friendship with many of his interview subjects encourages them to be relaxed and open in their responses. The film has an endearing, easygoing vibe throughout, and the only frustrating aspect of the movie is how little time we get to spend with some of these fascinating characters. Something From Nothing has to fit an awful lot of content into its 106 minutes – the director must have collected enough material for a TV series – and as a result we only get to spend a couple of minutes with many of the contributors before moving onto the next one.

But in those few minutes, Something From Nothing often yields golden moments. KRS-One reveals how his rap career was sparked by having to react on the spot when another rapper insulted him during a performance; Run DMC recalls life as the biggest hip-hop act in the world; Dr Dre talks about the work ethic that has been the secret to his longevity; and the director himself shares some amusing tips on how to recover from onstage slips and verbal stumbles. The film also gleans insights into the writing process of many artists, revealing the careful structure that holds together their most complex rhymes, and in the film's most inspired gambit, he invites each interviewee to perform. Some recite rhymes created by other rappers that have meant a lot to them, while others freestyle a verse, often brilliantly. Immortal Technique's two-minute take on the American experience being undoubtedly one of the film's most powerful moments.

So content is king with Something From Nothing, and Ice-T understands that. His directorial style is unspectacular, although he does incorporate striking helicopter shots that emphasise the geographical spread of hip-hop music, and the rough-and-ready approach has its own charms, as in a scene where he struggles to clear bystanders before conducting a street corner interview. The film is sometimes guilty of touching on aspects of rap culture that it doesn't have time to explore in any depth, but when Something From Nothing finds its focus, it becomes an illuminating and hugely entertaining work, which encourages you to listen to this music with fresh ears.
Philip Concannon
Share
‹
›
Home
View web version