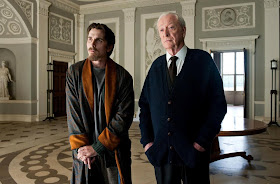 Ambition is a wonderful thing to possess, but sometimes a surfeit of ambition can be a film's fatal flaw. The Dark Knight Rises is the third and final instalment in Christopher Nolan's Batman trilogy, and it provides him with the biggest canvas he has ever worked on. There is so much going on in the film, with so many characters following their own agendas in different locations, as Nolan and his brother Jonathan (his regular co-screenwriter) tell a story that spans months; and the result is a picture that's easily the director's most bloated and unfocused work. He tries to pull the disparate strands together for his explosive finale, and he just about gets there, but the strain this puts on the Nolans' storytelling skills is all too evident.

This strain is epitomised by one moment in particular. Bruce Wayne (Christian Bale), beaten but resurgent, finds himself stranded in the middle of God-knows-where with no money, no allies and no visible means of transport. We wonder how he is ever going to find his way back into Gotham, a city held hostage and rendered inaccessible by Bane (Tom Hardy) and his army, but the Nolans choose to answer that question by not answering it. By a stroke of the editor's hand, Wayne is back in Gotham, and ready to fight back against his new nemesis. The Dark Knight Rises is rife with such moments, in which characters appear from nowhere and make decisions to serve the twists of the convoluted plot (Jim Gordon carrying the true story of Harvey Dent around in his pocket is another groaner). The film should be sleek and gripping, but the first two hours of this overlong picture feel cumbersome, uneven and inelegant, with the overall tone one of stifling portentousness.

The Dark Knight came out just four years ago but The Dark Knight Rises picks up its story eight years after Batman vanished into the night at the end of that film, taking the blame for Harvey Dent's death so the DA's gleaming reputation would not be tarnished. He has spent the intervening years living in a Howard Hughes-like seclusion, while everyone outside Wayne Manor wants a piece of him. Wealthy philanthropist Miranda Tate (Marion Cotillard) wants to get her hands on Wayne's fusion energy gizmo, devious board member Daggett (Ben Mendelsohn) wants to get his hands on Wayne's shares, while cat burglar Selina Kyle (Anne Hathaway) wants to get her hands on his family jewels (not like that – this is a Christopher Nolan film, remember). As well as introducing us to these new faces, The Dark Knight Rises has to establish Hardy's villainous pedigree and find room for resourceful street cop Blake (Joseph Gordon-Levitt), and as the film clumsily hopped between these plot strands, I wondered if there really was any need for more than an hour of exposition at the start of the third film in a trilogy?

Nolan is clearly building towards something in these opening stages, but to what? The Dark knight Rises is not content to simply bring the story of Batman to a satisfactory close; Nolan intends to make something mythic, novelistic, topical and spectacular. With that in mind, some of his storytelling choices are simply baffling. Bane's grand plan – to instigate an uprising of the lower classes in Gotham before destroying it months later – makes little sense, and the long stretch in the middle of the picture, in which Bruce Wayne lies immobile while Gotham falls apart, almost kills the film stone dead. The Dark Knight Rises is 164 minutes long but that's not a problem (anyone who knows me will tell you how much I like long films) but the problem is how long it feels, and the wildly inconsistent pacing and storytelling makes much of the opening two hours almost interminable.

And yet, Nolan's qualities shine through on numerous occasions. His handling of action sequences is still lacking but it has improved considerably on the often incoherent scenes in his previous Batman films, and Wally Pfister's cinematography is predictably striking. He also has an undeniable knack for casting, and some of the supporting performances here do more than their share to keep the picture alive. Joseph Gordon-Levitt is terrific as the young, idealistic cop who essentially becomes Batman's stand-in while he's out of commission, and Tom Hardy brings a presence and direct brutality to Bane, even if there's only so much that any actor can do with that character (Having to emote from behind a mask does nothing for Hardy). The star turn here, however, is Anne Hathaway as Catwoman, who gives the whole production a lift whenever she appears on screen. Hathaway brings two crucial elements to the picture – a sly wit and a whiff of sensuality – that Nolan seems chronically averse to, and her role is vital for puncturing the self-importance that hangs over The Dark Knight Rises, although it is never completely dispelled.

As such, we know that the ending is going to be something big, and to be fair to Nolan, the last 45 minutes of the picture is where it all comes together to an effective degree. Is it worth waiting for? Yes, on balance I think it is, but it's hard to avoid feeling a sense of disappointment after The Dark Knight Rises, a film that fails because it has lost a sense of perspective on what it needs to be. Nolan appears to have positioned himself as a creator of fantastical sights with his Batman trilogy and Inception, but I think it would be good for him to remember Memento, which remains his best work. Working on a small, streamlined picture again may do Christopher Nolan the power of good, allowing his technical proficiency and storytelling ingenuity to really take flight. With a weighty behemoth like The Dark Knight Rises, he never looks likely to get off the ground.
Philip Concannon
Share
‹
›
Home
View web version