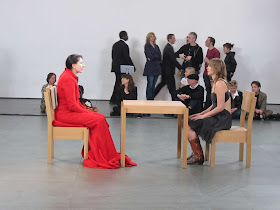 From March 14th to May 31st 2010, Marina Abramović sat on a chair in the middle of a large hall in New York's Museum of Modern Art. A few feet in front of her another chair was situated, and thousands of people queued for hours for the chance to sit quietly in front of the artist. Some smiled as they faced Abramović, others cried, while some attempted to pull off attention-seeking stunts and were quickly ushered away (although I'm not sure why a naked woman had to be ejected from the show when nude models were situated in doorways around the gallery as part of Abramović's exhibition); but throughout it all, Abramović just sat there and gazed deep into the eyes of each participant. She did this for the six days a week, from the time the museum opened to the time it closed, and she did it without breaks, eventually spending an astonishing 736 hours in the chair as people came and went in front of her.

Abramović's performance – the centrepiece of a career retrospective – was entitled The Artist Is Present, and that's also the title of Matthew Akers' documentary, which follows the charismatic Serbian through this endurance test while also looking back at the path that led her here. The self-professed "Grandmother of performance art" has been working since the 1970s on pieces that force her to throw herself body and soul into her art. For anyone unfamiliar with Marina Abramović's work, many archive clips in this film will be startling and troubling. An early performance involved her stabbing a knife between her splayed fingers and then attempting to repeat exactly the same rhythm, even to the extent of inflicting the same cuts. In another performance she took on an entirely passive role, standing in a room and inviting members of the public to use the various objects nearby as they wished. A gun and a bullet were among the objects made available.

As we watch these performances, the double meaning of the film's title becomes clear – the artist is entirely present in her work, there is no holding back, and no fakery is countenanced. At one point in the film, Marina meets with David Blaine to consider a potential collaboration, but the idea is quickly dismissed because they are in very different businesses. He is an illusionist whereas she is focused on the reality of the human experience, exploring the limits of pain and endurance, and challenging the perception of her audiences. The intensity we see in Abramović as she works is remarkable thing to behold, and it was never more apparent than in her relationship with fellow artist Frank Uwe Laysiepen (or Ulay), a fellow artist who she loved and collaborated with in the 1970s and 80s. Theirs was a passionate and often volatile partnership, but it was also a fruitful one, and the scenes that explore Marina's time with Ulay are the most touching in the documentary. Both artists look back on their time together with humour, honesty and affection, and chemistry that exists between them is still tangible, particularly when Ulay sits down opposite Marina in The Artist Is Present, providing them both with a powerful, cathartic moment.

When the time comes to cover the climactic show, Akers does a fine job of allowing us to share the silent exchanges between Abramović and the various people who cross her path, judiciously using close-ups and occasionally cutting away to those who queued for so long to get just a moment with Marina. The Artist Is Present is a lucid, engrossing and insightful documentary that gives us a full sense of why Marina Abramović is such an extraordinary figure, and why the recognition she is now receiving is long overdue. "Nobody's asking me why it's art anymore," the thoughtful and eloquent Abramović states as she considers her recent embracement by the mainstream. It took the world a long time to catch up with Marina Abramović, but the value of her artistry will surely be apparent to anyone who watches this film.
Philip Concannon
Share
‹
›
Home
View web version