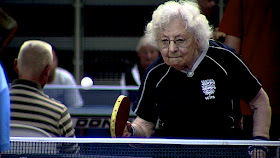 One of the subjects in the new table tennis documentary Ping Pong reflected my own feelings when he said he'd be happy to still be walking at the age of 100, but Australian centenarian Dorothy is not content with simply being mobile. She has travelled to China to compete in the World Table Tennis Championships for contestants over the age of 80, where her advanced years make her something of a celebrity among the ping pong-mad Chinese crowd. Dorothy is one of the contestants that Hugh Hartford's undemanding crowdpleaser follows during their preparation for and participation in the tournament, and throughout the film they display a boundless spirit and enthusiasm that would put people half their age to shame. As one interviewee bluntly puts it, "Young people are shitting themselves."

This is the kind of film that succeeds thanks to the strength of the characters it focuses on rather than the filmmaking technique on display, and Hartford has certainly picked his subjects wisely. Les D'Arcy is the 89 year-old avid sportsman from Stockport who is in astonishing physical condition and is one of the firm favourites for the trophy. His good friend Terry Donlon is in a less stable condition, as he has suffered cancer in various parts of his body and his 40% lung capacity often leaves him short of breath during matches, but Terry is determined to go as far as his body and spirit will carry him, and Ping Pong is full of such tales of courage and resolve. 89 year-old German contender Inge took up the sport after a stroke had left her in the dementia wing of a care home, and she used it as a tool to train her body and mind, allowing her to regain her faculties to a remarkable degree.

Ping Pong shows us that this is far more than a sport for many of the people taking part in this tournament. For some of them, it has had a revitalising effect on their lives, and has given them a reason to stay physically and mentally fit, and to make the most of the time they have left. They are all philosophical when asked about their remaining years – 89 year-old Ursula says she would rather die at the table rather than in a home – and the frank good humour they bring to their experiences makes the film highly entertaining. But that sense of humour shouldn't mask the deep-rooted determination that comes to the fore once the competition is underway. When a couple of the sprightlier octogenarians are up against each other the action is surprisingly fast and furious, and there's even a hint of foul play late in the game, as Les's bat mysteriously disappears just before the climactic game.

The film is 75 minutes long and that's just about as long as it needs to be. Hartford keeps it moving, maintaining a light tone and neatly judging the more emotionally resonant moments, and while there's not a great deal to Ping Pong beyond its familiar narrative trajectory, the characters the film is built around elevate it. Their indefatigability and refusal to bow to the ravages of time make Ping Pong a funny, touching and inspiring picture, which goes a long way to proving the adage that you're only as old as you feel.
Philip Concannon
Share
‹
›
Home
View web version