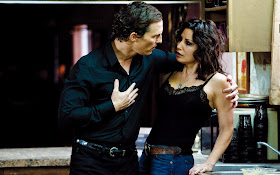 It's easy to imagine the Coen brothers having a lot of fun with Killer Joe. Tracy Letts' story concerns a redneck family up to their necks in bad decisions, with a debt to a hired killer putting them all in jeopardy. The plot rapidly escalates out of control in a darkly comic fashion, but filmmakers like the Coens would have maintained an ironic distance to events, rather than plunging headfirst into violence and depravity, as William Friedkin has done so bracingly in his film adaptation. This is the second time Friedkin and Letts have collaborated – after the excellent and overlooked Bug in 2006 – and they appear to be a perfect match, with Friedkin having no qualms about matching Letts stride for stride as he charts his characters' journey into craziness.

In fairness, the journey isn't a long one. Friedkin sets the tone in the opening scene, which turns the volume up to 11 as a storm rages, a chained-up dog barks incessantly, and a young man hammers desperately on the door of a trailer. This is Chris (Emile Hirsch), a man in debt to bad people, and he is greeted at the door by his stepmother Sharla (Gina Gershon), who is naked from the waist down and thinks nothing of thrusting her unkempt bush in his face. Chris's father Ansel (Thomas Haden Church) justifies his wife's state of undress by explaining that she didn't know it was Chris at the door, with the actor's dull-witted delivery of this salient point being the first of many laugh-out-loud lines in the film.

Killer Joe is essentially a comedy – and it is one of the funniest films I've seen all year – but it's the kind of comedy that tries to make us choke on our laughter, which is a tricky balance to pull off. That the film works as well as it does is largely down to the small cast, all of whom are a perfect fit for their roles, but two knockout performances stand out, one from a young actress hitting new heights, and the other from familiar face showing us aspects of himself that we never knew he had.

Chris' sister Dottie is that the centre of the drama and she is a perfect character for Temple, who brings just the right detached, dreamy tone to her performance. Naïve and coquettish, Dottie comes across as a little girl in a young woman's body and she inspires a powerful protective urge in Chris, although the film suggests that incestuous desire might be confusing his feelings. When Chris' plan to bump off his mother and claim the insurance money leaves him indebted to corrupt lawman Joe (Matthew McConaughey), the hitman decides to take Dottie as collateral, and McConaughey takes control of the picture. It has been a long time since I have been excited by anything McConaughey has done, but this is an extraordinary resurrection for a once-promising actor who has spent too many years slumming it with lousy material. Joe is the role that McConaughey so desperately needed, as it allows him to utilise his undeniably screen presence while pushing his persona into darker, more twisted places.

Friedkin is unafraid of exploring such places; in fact, he appears to relish it. He is perfectly at home with the lurid, sensational aspects of Killer Joe, and he remains admirably committed to following through on them. In doing so, he risks alienating the audience (the hysterical climax to the picture is often disgustingly violent, and the chicken scene is already notorious) but with Letts' finding large doses of humour and horror in this scenario, often simultaneously, Friedkin is capable of serving up a queasily compelling spectacle. A film version of Letts' 2008 play August: Osage County is currently in production and I'm a little disappointed that Friedkin isn't taking the reins on that picture. Working with Tracy Letts on his last two pictures appears to have revitalised this director, and I'd love to see push an A-list cast to the kind of unexpected heights he achieves with Killer Joe.
Philip Concannon
Share
‹
›
Home
View web version