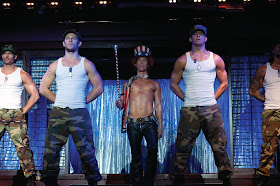 Steven Soderbergh's fondness for casting actors in roles that suit their real-life abilities is good news for Channing Tatum. Before making his name as an actor, Tatum worked as a stripper, and he has mined his own past for inspiration with Magic Mike, in which he plays the title character. For Mike, life appears to be good; he wakes up with two naked women in his bed, he's busy making plans to turn his passion for furniture design into a business, and at night he struts across the stage as screaming women thrust cash into his thong. But, as we are introduced to Mike's world through the eyes of newcomer Adam (a surprisingly excellent Alex Pettyfer), Reid Carolin's screenplay warns us that there's a soullessness and a dark side to all of these sexy shenanigans.

This portion of the movie makes the film feel a little lopsided. Magic Mike is so much fun when we're either onstage or backstage, enjoying the energy of the strippers' routines and their jokey camaraderie behind the scenes, that the consequences come as something of a drag. It's not that there's anything wrong with these scenes per se, it's just that the film really needed stronger actors than the ones Soderbergh has assembled to make them feel like anything more than familiar, hackneyed moralising. This may be the role he was born to play, but Tatum's range of emotional expression does not match his range of dance moves, and when a poignant close-up is required, the camera lingers on Tatum's face without getting a great deal in return. The same could be said of Cody Horn, who plays Adam's sister and Mike's love interest. She seems uncomfortable and unsure of her actions, and her sullen demeanour makes it hard to give a damn about this burgeoning relationship.

I don't think Soderbergh cares too much about it either. He's far more engaged by his central male trio, who collectively offer a snapshot of a stripper's entire lifespan. Pettyfer is the wide-eyed innocent, drawn to this job by the promise of easy money and sex; Tatum is a man at a crossroads, hoping to leave this life behind and go legit – while Dallas (Matthew McConaughey), is the ghost of stripping future. A faintly ridiculous figure still clinging to his past glories and his dream of establishing an empire, Dallas is the most outrageous character in the ensemble, and McConaughey has a ball playing him. Parodying his own shirtless reputation (and naked bongo-playing skills), McConaughey gives a hilarious performance, but there's also an underlying sense of desperation in his portrayal. This is most evident in Dallas's final dance number, with which he wants to show the world that he's still got it. What exactly is the value of what he's got, we wonder.

Another man showing the world that he's back on form is Steven Soderbergh. When Soderbergh isn't firing on all cylinders, his disinterest is all too apparent, and I've felt he has been coasting through his last couple of pictures. Magic Mike is something else entirely, particularly in the thrilling dance sequences, when the director's eye for a great shot and his sharp cutting generates an intoxicating electricity that reaches the cinema audience in the same way it hits the women screaming around the stage. Soderbergh's direction is fun and inventive (the penis pump shot is inspired), and it's a thrill to see him bringing his loose, energetic style to a subject matter that really benefits from it. Many viewers will undoubtedly turn up to Magic Mike only for the oiled-up torsos, but I hope they appreciate just how well-directed this movie is. The dancers on stage may be the ones putting on a show, but Soderbergh is the one bringing the magic.
Philip Concannon
Share
‹
›
Home
View web version