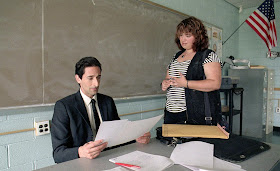 Tony Kaye's new film is called Detachment, which strikes me as an inappropriate title simply because the director himself seems incapable of taking a detached approach to any subject. When Kaye makes a feature film, which he has managed to do three times in the past 15 years, he throws himself wholeheartedly into it. This uncompromising style can make his films feel shrill, didactic and hyperbolic – pictures that hammer home their points with sledgehammer subtlety – and those accusations will surely be thrown at his latest. One scene in particular, in which a teacher admonishes a scantily clad girl by showing her a photo of diseased vagina, could stand as Detachment's modus operandi. But while his techniques may be questionable, there's no doubting the man's sincerity, and when this socially conscious filmmaker is tackling a theme that has already been talked to death, perhaps the audience needs to be shouted at in order to take notice?

Whatever its flaws may be (and I can't deny that its flaws are glaring), I found Detachment to be engrossing and often astonishing, and a welcome return for a filmmaker unafraid of letting raw emotion drive his choices. The stage for his explosive film is an American high school, populated by feckless kids and despairing teachers. Henry Barthes (Adrien Brody) is a new arrival, a substitute English teacher whose determination to never get attached to the youngsters in his care means he's the perfect man to call when you need someone to hold the fort, before he slips away as quietly as he came. We've seen this movie before, of course, and we assume we can map out the plot from here – Henry will initially face resistance from the truculent teens before gradually winning their favour and helping them find their voice. We think we know where Detachment is going, but Tony Kaye isn't interested in playing the genre game.

Detachment is a polemical tirade against a system that the Kaye and screenwriter Carl Lund (a former public school teacher) see as being fundamentally broken. A whole generation of kids have been failed by their teachers, by their parents and by themselves, and neither the film's director nor screenwriter are ready or willing to offer easy answers. Instead, the film unfolds in a series of heightened vignettes, showing us teachers at the end of their tether or in confrontation with students. Many of these encounters end in screaming matches (witness Lucy Liu's meltdown when faced with an apathetic youngster) or threats (Christina Hendricks' character is threatened with rape), but Brody provides the film with a necessary oasis of calm at its centre. He is perfect casting for this noble, if sometimes misguided, martyr-like protagonist and he responds with his most empathetic and compelling performance in years.

In fact, the cast is the one facet of Detachment that surely everyone will agree is spectacular. Kaye has enlisted an incredible line-up of actors, with Marcia Gay Harden, James Caan and Tim Blake Nelson joining those stars already mentioned, while talented performers such as Bryan Cranston, William Petersen and Blythe Danner turn up in little more than cameos. However, the film is comprehensively stolen from under the noses of these famous names by two newcomers, each of whom bring an enormous amount of emotion to their performances. The director's daughter Betty Kaye plays Meredith, a sensitive and artistic teen bullied into introversion over her weight and rumoured homosexuality, who forms a deep attachment to Henry, and Kaye's performance makes her the film's most sympathetic character, just about managing to transcend cliché. As 15 year-old prostitute Erica, Sami Gayle achieves a similar feat, making the awkward setup of her adaption to platonic domesticity with Henry convincing and even touching, and her final scenes in the film are heartbreaking.

Perhaps Brody, Kaye and Gayle are so effective because they underplay while everything around them is delivered at a frenzied pitch. Kaye's direction is feverish and intense, utilising garish close-ups and lurid colours, and linking scenes with animated inserts or fantasy sequences. His style recalls Oliver Stone in his early 90's fervour, but there is a sense of Kaye simply throwing everything he has at the movie to see what sticks. This is a 90-minute film that contains enough characters and incident to fill a miniseries, and the director's determination to batter us stylistically, thematically and emotionally makes the movie as exhausting as it is invigorating. Tony Kaye has already made one great film (his 2006 abortion documentary Lake of Fire) and one near-great film (his controversial and compromised American History X), and the messy Detachment doesn't come close to achieving any kind of greatness. However, it does feel like a vital piece of work from a filmmaker whose provocations come from a very genuine place, and perhaps that makes it just as valuable as a great movie. You may love Tony Kaye's films or you may hate them, but detachment isn't an option.
Philip Concannon
Share
‹
›
Home
View web version