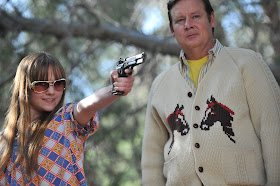 Most people who watch God Bless America will be able to empathise in some way with its central character. Frank (an excellent Joel Murray) is an ordinary guy whose tolerance for the rudeness, shamelessness and idiocy he sees around him every day has reached breaking point. Every TV channel he turns to appears to have people aggressively shouting at each other, or some useless contestant on a talent show being mercilessly mocked, and his pain is exacerbated by the wailing of his neighbours' baby, which causes him crippling migraines. Even if Frank turns off the television he finds there is no escape from the insidious cruelty and ignorance of modern society. As he drives to work each radio station continues the onslaught, and when he reaches the office, every conversation begins with, "Did you see what happened on TV last night...?"

Who among us can say they haven't shared the same frustrations as Frank? Who hasn't felt the same anger rising inside us as we watch hate-spewing commentators being given a platform for their views, seen the talentless and witless being elevated to instant celebrity status, and heard colleagues interminably discuss the most moronic television shows? God Bless America is a film about an everyman deciding to take violent retribution against the people he believes are in some way responsible for polluting society. For Frank, the breaking point (on top of losing his job and the discovery that he is terminally ill) is a TV show in which a 16 year-old girl is given a new car for her birthday, and then throws a tantrum because it was the wrong type of car. She becomes the first name on his hit list.

If the story of that car-based tantrum seems familiar, it's because it veers pretty closely to the truth. On the MTV show My Super Sweet Sixteen, a spoiled child really did burst into tears because her parents had unveiled her present of a brand-new car before her big party, thus "ruining" the girl's big day. God Bless America is not an over-the-top satire in the vein of Idiocracy, and everything we see in the film has a firm basis in truth. Fart noise ringtones, people enjoying their 15 minutes of fame after embarrassing themselves on TV, people behaving disgustingly on "reality" shows – the film doesn't need to exaggerate its content to drive the point home, it just needs to hold up a mirror to our society, and ourselves.

God Bless America is written and directed by Bobcat Goldthwait, who is building a body of work that explores taboo subjects in a comedic fashion. His last two pictures, Sleeping Dogs Lie and World's Greatest Dad, had real wit and insight underpinning their attention-grabbing premises. In some ways God Bless America is a natural extension of those pictures, but while it's his most ambitious undertaking yet it's also his least successful. The subject matter seems to have brought out the polemicist in Goldthwait, and on too many occasions the movie stalls when Frank starts delivering monologues about the ills of society. After a bracing opening half-hour, the director also struggles with the character of Roxy (Tara Lynne Barr), a teenager who decides to join Frank on his killing spree. Her character never feels real in the same way Frank does, and their relationship always feels like an unlikely contrivance, despite Barr's sparky performance.

Despite being a slightly more uneven and unsatisfying work than his previous films, I enjoyed God Bless America, and I think Bobcat Goldthwait is by some distance the most interesting comic filmmaker working in the United States right now. I wish his latest film had built upon its astonishing opening sequence rather than narrowing into predictability (the plot essentially has nowhere to go but the place you always know it's going to go), but the film is always engaging and occasionally very funny. It may have no impact beyond the (too small) number of viewers who habitually go to see Goldthwait's films, but if you've ever suppressed the desire to kill somebody for talking or texting in a darkened cinema, then maybe this is the movie for you.
Philip Concannon
Share
‹
›
Home
View web version