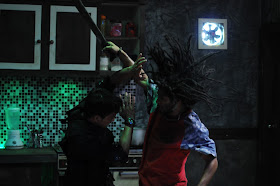 There are holes to be found in The Raid, but on reflection those holes don't really seem to matter. The film is wafer-thin in its plotting, light in its characterisation and the whole aesthetic of the picture is cheap and ugly, but The Raid's attention is focused on other things and its success in those areas is so spectacular it renders all other concerns moot. Gareth Evans' film is built on action and its plot is basically an excuse for Iko Uwais to run from one room to another, beating people up in a variety of brutal and occasionally inventive ways. The structure of the picture is akin to that of a computer game – the protagonist starts at the bottom of a tower block and must climb each level to face the boss on the top floor.

That boss is Tama, a crime lord running his drug operation from the top of this Jakarta tower. He's the target of a police raid led by the 20-odd elite squad members tooling up outside. The one figure we focus on is Rama, played by Uwais, a diminutive figure whom we first meet kneeling on a prayer mat and kissing his pregnant wife goodbye. Evans doesn't waste much time on developing the key players in this drama, and in the shorthand of The Raid these two brief glimpses of Rama's home life are enough to establish his good-guy credentials. The Raid is a film drawn in simple, broad strokes. There's a hero and a villain, then there's a corrupt cop and the villain's seemingly indestructible right-hand man. These characters are archetypes, and the plot follows familiar lines too – the raid is a disaster, leaving the men ambushed and hopelessly outnumbered, and we follow the rookie Rama as he tries to survive in the most hostile environment imaginable.

The simplicity of The Raid's approach is all to a purpose; Evans won't let anything slow down the film's momentum, or distract from the fight sequences which are its raison d'être. This is the director's third feature but it's the first to win widespread international recognition, and it is clearly a calling card for both Evans and his star. The action in the film comes in a variety of guises, from frantic gunfire to brutal hand-to-hand combat, and Evans handles every violent encounter with a masterful control of timing and space. He makes the action fluid, visceral and authentic, and he is aided by the extraordinary athleticism and brooding presence of his star, who also played his part in choreographing the violence.

Of course, the risk with any film constructed entirely around fight sequences is that a sense of monotony will eventually sink in – surely one shot of a man getting beaten to a pulp is no different to another? – but The Raid admirably avoids that pitfall. There's enough variety in the specifics of each encounter to make every battle feel fresh, and Evans utilises his single location effectively. Pitched battles between machete-wielding men take place in narrow corridors, while a group of cops find an inventive way to use a fridge as they escape through the floor of one apartment into another. Evans also shows his ability to develop a slow-burning tension with one scene in which Rama and an injured comrade hide in a tight space and come within the width of a blade of being discovered.

If there is a disappointing sense of monotony in The Raid it lies in the film's visual style. The whole picture is drab and grey in a manner that feels oppressive after an hour has elapsed. It could also use an occasional variation in tone; one of Evans' touchstones is clearly Die Hard, but that had equal parts humour and humanity mixed in with its action. The Raid is utterly single-minded in its approach, which is both its strength and its weakness, but it should strike a chord with movie fans who haven't seen an action movie this exciting and invigorating for many years. But while Evans and Uwais may look destined for bigger and better things, I hope people don't forget Yayan Ruhian, who plays chief henchman Mad Dog. Stringy and wild-eyed, Mad Dog is a memorable figure, a character who lays down his arms because he believes a real man fights with his hands, and he is at the centre of the film's two most gripping encounters. Uwais may be the star of The Raid, but Yayan Ruhian is its secret weapon.
Philip Concannon
Share
‹
›
Home
View web version