Review - An Oversimplification of Her Beauty 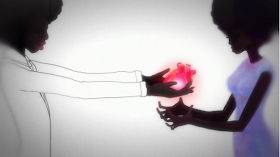 I'll probably need to watch An Oversimplification of Her Beauty again before coming to any firm conclusions about how successful it is. My first viewing of Terence Nance's picture was frequently exhilarating and occasionally exhausting. The title hints at oversimplification, but the movie is anything but as Nance dives into the complicated nature of his own love life. At its heart, An Oversimplification of Her Beauty is a rather straightforward story about a boy who is in love with a girl, but whose love isn't reciprocated in the same way. It's the adventurous and idiosyncratic approach he has taken with this story that makes if feel like something new, even if it's an approach that is just as likely to alienate viewers as it is to beguile them.

An Oversimplification of Her Beauty has its roots in another film, How Would You Feel?, which Nance made in 2010. Both films focus on the filmmaker's relationship with Namik Minter, a friend and fellow aspiring artist whom Nance has been besotted with from as far back as 2006. How Would You Feel? details a moment when Nance had set a date, only for the object of his affections to pull out at the last moment. This prompts a bout of self-questioning from Nance, as he replays the incident, and the moments that led up to it, over and over in his head, gradually giving us more information and context.

When Nance switches between this movie and the new footage that An Oversimplification of Her Beauty consists of, he creates the effect of a VHS tape being paused and ejected, to be returned to later. An Oversimplification of Her Beauty continues to document the filmmaker's pursuit of Namik in a variety of ways. The most startling and memorable of these techniques is the incorporation of animation into the picture. Nance doesn't limit his romantic reveries to just Namik, and his thoughts drift to many women who have won his heart before slipping away. These encounters are re-imagined and shared by the director through hand-drawn and stop-motion animation sequences, with Nance mixing and matching from his grab-bag of stylistic tricks to create something that feels disarmingly imaginative and playful.

But is there too much of it? Nance reportedly had a three-hour cut of An Oversimplification of Her Beauty before taking the film to Sundance, where he listened to advice and pared down his vision to a more manageable ninety minutes. That ninety minutes feels so densely packed, however, it's almost bursting at the seams, and some aspects of it inevitably feel short-changed. In particular, despite Nance's offer to Namik to make her own film of their relationship and the Q&A sessions he shares with her, we are never clear on her own thoughts on the matter. Perhaps that's because she herself is unsure of her feelings, or perhaps it's appropriate for how opaque Namik seems to the lovestruck Nance, but I can't help feeling a more balanced approach to storytelling might have offered more incisive moments.

Nevertheless, there are incisive moments dotted throughout the picture, and it may divulge even more on repeat viewings. My favourite sequence – aside from the brilliantly judged, immediately seductive opening – involves Nance telling Namik about a passage in a book that reminds him of her, only for her to read it and fail to recognise any resemblance. The scene touches cleverly on the way people in a relationship see things from wildly different perspectives and misread signals, and it's the kind of scene that will surely resonate with anyone who has found themselves in such a situation. For those that haven't, there is still much here to enthral, stimulate and impress. An Oversimplification of Her Beauty is the work of an artist trying to find new ways to express the purest and most complex of emotions.
Philip Concannon
Share
‹
›
Home
View web version