Review - The United States of Leland 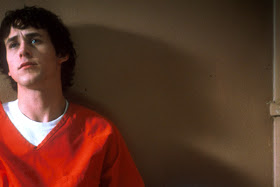 Shortly after Kevin Spacey won the Best Actor Academy Award for his role in American Beauty, something about him changed dramatically. Up to that point, Spacey had established a reputation as and actor whose chief gifts were his sly wit and intelligence; attributes which he displayed to full effect in such films as Swimming with Sharks, Glengarry Glen Ross, The Usual Suspects, Se7en and LA Confidential. But in recent years he seems to have lost the techniques that made him one of the leading actors of the 90’s. He has starred in dire ‘issue movies’ (The Life of David Gale), given performances as sad-sack, inert characters which are a waste of his talents (Pay it Forward, The Shipping News), and produced a couple of embarrassing vanity projects (Ordinary Decent Criminal, Beyond the Sea). The wit now appears as a smugness, the laid-back attitude now simply seems lazy. Spacey only has a supporting role in The United States of Leland but, as he also acts as producer on the film, I feel he should take a fair amount of the blame for inflicting this dreadful effort upon us. It’s very much of a piece with his recent projects too; a navel-gazing, self-conscious, painfully earnest film which attempts to deal with a contemporary issue (in this case, violence among disaffected teenagers) in a trite and superficial manner. The film itself is the first time effort from writer/director Matthew Ryan Hoge and he shows himself to be utterly inept in both departments. The film is torturously scripted, clumsily executed, staggeringly naive, and I found it a genuine struggle to sit through.

The Leland of the title is one Leland P Fitzgerald (Ryan Gosling), a detached teenager who, for no apparent reason, kills the retarded younger brother of his ex-girlfriend Becky (Jena Malone). Leland is sent to a correctional facility where he catches the attention of a teacher, and would-be novelist, named Pearl (Don Cheadle). Pearl smells a book in Leland’s story and starts to organise private interviews to try and coax the truth of the murder out of him. Meanwhile, the family of the murdered boy are trying to get their life back together again and Leland’s father, a respected but widely-loathed author (Spacey), is flying in to find out what’s happened to his son.

There’s enough there to keep a seasoned director busy, with a handful of plot strands all jockeying for attention, but Hoge’s lack of experience is shown up very early on and his handling of the narrative never seems confident. Hoge makes things even more difficult for himself with his ridiculous decision to play with the time frame and reveal much of the film through flashbacks, an approach which only makes things confusing and off-putting. The screenplay is light on characterisation (I spent most of the first half figuring out who was who, and how they were related to each other) and desperately thin on motivation, but it’s heavy on philosophy. Oh boy, is it ever heavy on philosophy. The United States of Leland is simply awash with pretension. Hoge attempts to fill every frame of this twaddle with meaning but has little idea about how or why he should do so. The lead character of Leland himself can’t utter a single line without it being heavy with significance and, as Ryan Gosling’s nasal whine also provides the narration, that’s a lot of profound dialogue. He says things like “There's another thing to learn about tears, they can't make somebody who doesn't love you any more love you again”, nobody in real life talks like this, so why does Leland? So poor is the writing on this film that we’re never even sure whether Leland is supposed to be some sort of higher being? Borderline autistic? An idiot savant? Gosling seems unsure himself and, with no help from the direction, he resigns himself to staring at everything in a curious manner. Cheadle is comfortably the best thing in the film, although he’s hardly stretched, and Spacey phones in the same performance he’s given in his last few films. Sensibly, Spacey keeps the handful of decent lines for himself and the only two scenes which provoked my interest were the ones which featured both Spacey and Cheadle. Even on autopilot, these two can elevate some pretty ropey material. The rest of the cast have nothing to work with and Hoge leaves them to their fate. Jena Malone tries valiantly to give her character some weight but fails, and Michelle Williams has a pointless role. On the plus side, the sight of Chris Klein attempting a dramatic scene is always amusing. The United States of Leland is dreadfully paced, false, preachy and badly-made rubbish; and yet I still watched in the vain hope that something would surely happen before the end of the film to make sense of this nonsense, to give some shape to this pointless film. But the silly, melodramatic ending is rushed through and we’re none the wiser as to why Leland committed his crime. Hoge might think he appears rather clever for not offering us a conclusion, as if he’s pulled one over on the audience, but I think it simply proves that he had nothing at all to say in the first place.