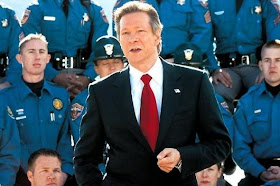 What a cast and crew! What a disappointment! Silver City, the latest effort from indie auteur John Sayles, had enormous potential, but the finished film is bloated, cluttered and more concerned with lecturing the viewer than providing an entertaining, compelling narrative. Sayles’ film tackles government corruption and questions the lack of dissent from the mainstream media, but a surfeit of subplots and excess of characters hinder the film, leaving it feeling like a missed opportunity.

Silver City revolves around a politician named Richard Pilager (Chris Cooper) whose campaign for Governor of Colorado hits a problem when a dead body is found in the lake where he is shooting a promotional video. Pilager’s team (including Richard Dreyfuss and Billy Zane) instantly swoop into action in an attempt to cover up the incident and distance their candidate from the corpse, hiring investigator Danny O‘Brien (Danny Huston) to find out who this body was and where he came from. But Danny finds out more than he bargained for.

Danny discovers that a local businessman (Kris Kristofferson), who seemingly owns everything in the state, is ploughing money into Pilager’s campaign in order to ensure he gets exactly what he wants from the new governor. Danny’s investigations also lead him to a cave where toxic waste is being dumped and he discovers the full extent of illegal immigrants being exploited in the state. Danny also has to deal with his ex-girlfriend (Maria Bello), a reporter who is covering the Pilager campaign, and their feelings for each other threaten to surface once more.

Sayles’ films generally favour character and situation over plot, and Silver City indicates why that may be the case. The director’s development of the various plot strands here is unwieldy at best, and almost incoherent at worst. Far too much of the dialogue is expositional, with some characters seemingly introduced just to explain the background or let the audience know what’s going on. Even worse is Sayles’ tactic of getting the actors to repeat facts and events to themselves as a means of further exposition. When Sal Lopez finds his tyres slashed he says to himself "Someone's out to get me", and when Huston finds his ex-girlfriend has taken his couch and confirms with "She took the couch". This is an utterly redundant and inelegant way to write dialogue, which is incredibly disappointing from Sayles.

The cast is packed with fine actors, and most of them are on good form, but that's part of the problem with this overstuffed, misguided effort. Many of the characters feel underdeveloped and a number of actors who I would like to have seen more of are relegated to the sidelines. Tim Roth gets one great speech about his determination to "sow the seed of doubt", but has nothing else to do, Billy Zane is a revelation as the sly and smooth spin doctor, but he completely disappears halfway through while Miguel Ferrer's rightwing radio host make a big impression in just one scene. The reduction of these characters' roles is even more frustrating when you consider the overlong and less compelling sequences involving Darryl Hannah, Sal Lopez or Ralph Waite.

The film's main stars are excellent though. Chris Cooper's performance is little more than an obvious George W Bush impression but he does it superbly, and his muddled speeches are often hilarious (a number of his quotes are lifted directly from early Bush speeches). Richard Dreyfuss is outstanding as the brains behind the operation, Maria Bello does well with very little, and I grew to like Danny Huston in the role of detective after finding him slightly miscast early on.

Silver City starts well, and I liked the neat ambiguity of the climax, but the middle section often drags. All the characters seem to be connected but it's hard to believe that any of these relationships are much more than a scriptwriter's convenient contrivance. Sayles makes his political points in a blunt and surprisingly unsophisticated manner, making the viewer feel less like he's being enlightened than being repeatedly hit over the head with facts and figures. The name given to Chris Cooper's character of Pilager (one letter away from Pillager) gives some indication to the level of subtlety on show.

There are some things which Silver City does very well - The political machine which uses the candidate as a mere puppet is smartly depicted (Pilager is described as 'user friendly' at one point), the film gathers pace towards the end and a number of scenes work well individually, but it's generally a very poor effort. Sayles' passion for the subject matter is clear but he seems to have let it cloud his judgement here, resulting in a flat, didactic and often very dull piece of film-making. Silver City is all about people finding their moral outrage, and fighting back against dishonest politicians and big corporations whatever the personal cost, so it can be applauded for its intent. Unfortunately the execution leaves a lot to be desired.