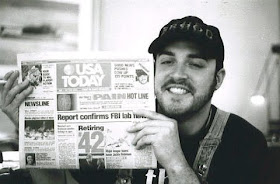 In 1997 a Los Angeles bartender named Troy Duffy had all his dreams come true at once. He wrote a script about Irish-American vigilantes called The Boondock Saints, and instantly saw it bought by Miramax chairman Harvey Weinstein. Duffy would receive $1million in total for his screenplay which he would direct, retain final cut and have his own band provide the soundtrack. Harvey even offered to buy the bar in which they finalised the contract for Duffy. Understandably, Duffy became something of an overnight celebrity; appearing on television, newspapers and magazine covers which celebrated this rags-to-riches story. Over the next three years Duffy managed to blow his golden opportunity in spectacular fashion.

Duffy spent the immediate aftermath of his big deal boozing with his friends and entertaining the numerous Hollywood actors who descended on the bar as soon as he became ‘the next big thing’. It didn’t take too long for Duffy’s new status to go straight to his head and he became an egotistical monster, alienating his family, friends, band members and anyone else who was unfortunate enough to encounter him. Understandably, Miramax’s enthusiasm for the project soon cooled as Duffy challenged their casting decisions, wasted their time and repeatedly insulted their staff. Weinstein pulled the plug and Duffy was out in the cold, having made a powerful enemy (as one interviewee states; “Harvey’s attitude is, ‘I made you - I can unmake you’”.

Overnight is the story of Duffy’s brief fling with fame and his long, inexorable slide back into obscurity. His rise and fall is captured in excruciating detail by documentary filmmakers Mark Brian Smith and Tony Montana, members of Duffy’s band and newly-formed music production company, resulting in a funny, fascinating but frustratingly uneven documentary which unfortunately suffers from a serious lack of perspective. Smith and Montana are among those who are used and abused by Duffy, and at times their film seems to focus too much on Duffy’s self-destruction alone, when it could also have exposed the inner workings of an industry which ritually chews up far more talented and appreciative filmmakers than Troy Duffy.

Despite the close access Smith and Montana had to this project, we never get a sense of how the big decisions are made. We don’t see a single meeting between Duffy and anyone from Miramax (how dearly I would love to view his initial meeting with Weinstein) and the 82 minute, choppily-edited film often feels horribly rushed. Instead, the bulk of the film focuses on Duffy’s boorish behaviour and his endless ability to shoot himself in the foot.

As a result, your enjoyment of Overnight may depend on your ability to tolerate 82 minutes in the company of an ignorant, foul-mouthed bully who can’t appreciate the golden opportunity millions of people would kill for. It’s hard to fully convey just how much of a jerk Duffy becomes as soon as he’s handed his 15 minutes in the limelight. On more than one occasion he claims he is set for ‘legendary’ status and remarks that he and his band are “doing something that has never been done before”. Duffy becomes a vindictive, snarling bully when he fails to get his way and he screws all of his friends and partners out of their share of the money (“You may deserve it, but you’re not gonna get it”).

Much of the film consists of Duffy branding Harvey Weinstein a “cocksucker”, though never to his face (in one of many cringeworthy scenes, Duffy tells Weinstein over the phone how much he respects him as his mentor), but by the end of the film I was siding with the Miramax chairman over this talentless fool. It’s little wonder that Weinstein chose to cut Duffy loose, he hardly needed the aggro that this arrogant, abusive director was bringing to the table, but I wish we had some perspective from his side of the table - to understand what he saw in the project in the first place.

Duffy eventually got The Boondock Saints made, at a fraction of the budget and with Willem Dafoe and Billy Connolly replacing his dream pairing of Kenneth Branagh and Ewan McGregor. Duffy took the film to Cannes where it was refused by every American distributor, eventually having a brief release on five screens. The band’s album was another disaster, selling 690 copies in six months - unsurprisingly, a record contract was not forthcoming. Duffy returned to anonymity, back behind the bar; bitter and friendless. Most viewers will feel he got what he deserved.

There is one pleasing final twist in the tale though, with The Boondock Saints eventually becoming something of a cult hit on video and DVD. Perhaps this was finally some vindication for Duffy? Not so, as his contract failed to give him a cut of any profits from home video sales or rentals. This means that the curious viewer of Overnight can rent The Boondock Saints safe in the knowledge that Duffy won’t be receiving a single penny. Ah, sweet schadenfreude.