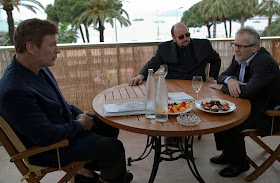 The general point of James Toback’s misshapen documentary Seduced and Abandoned is that artists like Toback can no longer get the funding for their films, although if the quality of this picture is anything to go by, perhaps that’s not such a bad thing. The film follows Toback and Alec Baldwin as they back-slap their way around Cannes in pursuit of funding for a Last Tango in Paris remake. Unfortunately, Toback and Baldwin prove to be two of the most obnoxious, deluded and insufferable people one could imagine being trapped in a room with. I felt particularly sorry for actresses like Diane Kruger, Jessica Chastain and Bérénice Bejo, whose eyes display a tangible panic as Toback and Baldwin discuss their plans for a “sexual political thriller.” Shambolically assembled, Seduced and Abandoned wanders from brief interview to another, without ever arriving at a cohesive argument but allowing us plenty of time to form a firm opinion of its two central figures. 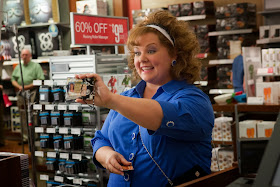 Another mainstream Hollywood comedy that consists of stock characters, absurd situations and no regard for consistency or logic. There’s the kernel of a decent idea in Identity Thief, but director Seth Gordon continually opts for the laziest option possible. Jason Bateman is a Jason Bateman character whose chances of promotion at work are threatened (oh no!) when somebody steals his identity and runs up a huge bill on his credit cards. For some reason Bateman has to travel cross-country to accost this criminal, which is where the film turns into a chase/buddy movie and loses sight of whatever it was supposed to be about in the first place. Melissa McCarthy can be a funny woman, but here she is asked only to play it loud, which gets old fast, until she aims to earn our sympathy for the predictably trite softening at the film’s end. This is Gordon’s third witless comedy in a row and it’s disheartening to think that this is what happened to the man behind the brilliant documentary The King of Kong. 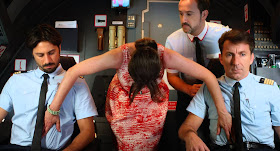 After a number of dark and emotionally charged pictures, perhaps Pedro Almodóvar’s desire to make something light and funny is understandable, but I’m So Excited! feels like a sketch idea or sitcom idea that has been painfully stretched to feature length. In fact, it most often reminded me of the old BBC2 comedy The High Life, which is hardly the standard of work we expect from a director of Almodóvar’s stature. The film’s centrepiece is a performance of The Pointer Sisters’ I’m So Excited by a trio of gay air stewards, which might not be such a bad idea in itself if they didn’t perform the whole damn song. Elsewhere, the jokes are cheap and often offensive; it’s hard to imagine that a incident involving a woman having sex with a sleeping passenger against his knowledge would have been played for laughs if the genders had been reversed. I’m So Excited! might have been a conscious attempt by Almodóvar’s to recapture the spirit of his early, bawdy films, but those early films were rarely as lifeless or tawdry as this. 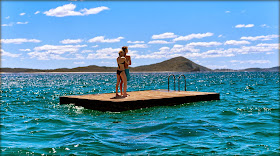 This extraordinarily dull tale of mothers falling in love with each other’s son might have worked if everyone involved had embraced the trashy, farcical nature of the setup, but they all take it so seriously. I guess Anne Fontaine doesn’t do levity, and I started having flashbacks to her dreadful Nathalie… as soon as I saw her name in the opening credits. She seems to be under the impression that she’s making a searing drama worthy of Bergman, and their air of solemnity that rests over the whole film is simultaneously ridiculous and stultifying. Naomi Watts and Robin Wright, both fine actresses, are left stranded by these ridiculous characters and their inexplicable motivations, while Ben Mendelsohn can feel thankful that he is written out of this one so arbitrarily halfway through before being tarnished by the stench of that Fontaine touch. 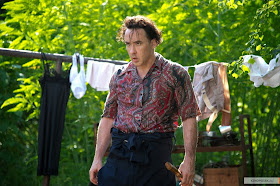 Lee Daniels is a full-throttle filmmaker who doesn’t let any consideration of subtlety or nuance get in the way of his pursuit of maximum impact. Some will undoubtedly enjoy the overheated, pulpy nature of The Paperboy – an adaptation of Peter Dexter’s novel – but I found it to be a dull chore, largely because Daniels is simply a very poor filmmaker. His staging and editing is a mess, creating a lumpy, ugly picture that never finds a sense of rhythm and his determination to push every button – racism, sexuality, violence – as often as possible just grows tiresome. The director demands similarly committed performances from his cast, but their heedless displays are pretty embarrassing to watch. Nicole Kidman’s deliberately trashy performance is by far the least of the picture’s crimes, but it still feels too often like an actress straining for effect, while Zac Efron just seems lost. John Cusack, meanwhile, has the rare distinction of giving two terrible performances as a sweaty weirdo in two Lee Daniels films this year, with his Richard Nixon in The Butler matching the quality of this one. Good work, John. 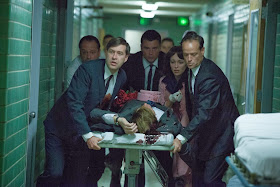 Made to cash in on the 50th anniversary of JFK’s assassination (it was release in UK cinemas on November 22nd), Parkland is an entirely redundant film that shifts the focus from JFK himself to a number of regular people who found themselves caught up in that day’s events. These include familiar names like Abraham Zapruder (Paul Giamatti) but also extend to lesser-known figures, such as the doctor who tried to save the President (Zac Efron) or Lee Harvey Oswald’s brother (James Badge Dale). Unfortunately, instead of a filmmaker with the Altmanesque touch required to bring this ensemble to life, Parkland is the work of former journalist and debutant director Peter Landesman. His direction has all of the energy and visual flair of a BBC Crimewatch reconstruction, and with no room to let their characters breathe, the actors never feel like anything other than actors to us. Landesman’s focus is entirely on restaging events as they happened, with no sense of how they work as drama, and the result if a film that is totally inert. In interviews to promote Parkland, Landesman has spoken of Oliver Stone’s JFK as “an interesting fairytale... but it's bullshit". That may be true, but at least Stone is a real filmmaker, and his film will still be fascinating viewers long after this cheap hackwork has been forgotten.

Bryan Singer’s Superman Returns is a flawed film, but it is a film that genuinely tries to create something beautiful, romantic and classical, and its ambitions largely outweighed its deficiencies for me. Certainly, I longed for Singer’s sense of restraint and composition as I suffered through the interminable climactic hour of Man of Steel, Zack Snyder’s latest exercise in overkill. A long, brutal, underwritten series of ugly visuals and huge explosions, Man of Steel is an astonishingly charmless blockbuster. The determination to make Superman as serious and brooding as Christopher Nolan’s Dark Knight series means that there is no time for any lightness of touch or moments of respite, and none of the screwball romance between Clark and Lois, which is the secret of the Christopher Reeve films' continued success. It’s dull but tolerable for about half of its running time, but the action-heavy final hour is simply punishing to sit through, as a CGI Superman and General Zod destroy half a city in their stupendously tedious battle. This is a callous, empty film - forget about characterisation or humanity, just sit back and watch the fireworks. 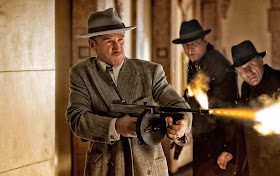 Gangster Squad was originally set to be a 2012 release before it was held back for re-editing after its cinema shootout sequence seemed inappropriate in the wake of the Aurora shooting. However, they could have done us all a favour by just holding it back indefinitely. A doomed mish-mash of conflicting tones and misjudged performances, it’s hard to know who exactly Gangster Squad is aimed at. Parts of it feel like an attempt to recreate the hard-boiled noir mood of a bygone age, while other scenes feel cartoonish, and verging on self-parody. Director Ruben Fleischer is horribly out of his depth and he has produced a gangster film that less convincing than Bugsy Malone. An interesting premise is squandered on a rote screenplay that never gives us a reason to care about the characters, while Sean Penn amuses himself with an unbearable scenery-chewing performance as Mickey Cohen, and squeaky-voiced Ryan Gosling makes little attempt to disguise his boredom. 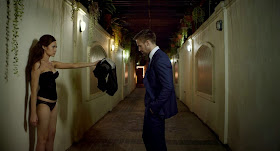 On a number of occasions in Only God Forgives a character is forced to sit and endure something against his will, which seems like a pretty apt metaphor for the experience of watching the film. Nicolas Winding Refn’s reunion with his Drive star Ryan Gosling accentuates all of the worst aspects of their first collaboration, and ditches all of its virtues. Gosling’s latest attempt at minimalism results in a performance that’s even more inert, and long scenes consist of him simply walking around Thailand in slow-motion, silently staring at things in a curious manner. At the other end of the scale, Kristin Scott Thomas camps it up tiresomely as his ghastly mother, and Vithaya Pansringarm chops people’s arms off with a sword. The film is little more than a series of bloody executions and torture scenes broken up by visually monotonous tracking shots and ludicrous conversations. I have no idea what Refn is aiming for here, but I found Only God Forgives to be nasty, juvenile, shallow garbage, and a genuine ordeal to sit through. 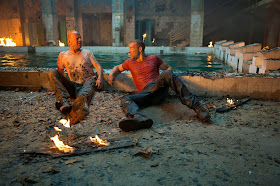 Die Hard is one of the all-time great action films, and any sequels were always likely to suffer from diminishing returns, but who could have imagined that John McClane would hit this dismal low? A Good Day to Die Hard is the fifth film in the series and it has been thrown together by people who clearly don’t give a damn about the franchise, McClane or the audience. One of those people is Bruce Willis, whose performance in the first Die Hard film still ranks as his finest work, but A Good Day to Die Hard is Bruce at his worst – a smug, smirking brute whose line deliveries suggest a man thinking only of his bank balance. The action sequences in the film are among the worst-directed I’ve ever seen in a mainstream Hollywood action film; the long, cacophonous car chase at the start of the film is completely incoherent, while the physics-defying helicopter tussle at Chernobyl (!) adds a layer of shitty CGI into the mix. A Good Day to Die Hard is astoundingly ugly, incomprehensible (the story, such as it is, arbitrary changes direction about half-a-dozen times) and every minute of it oozes contempt for the viewer.

Die Hard 6 is already in production.