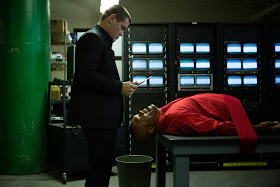 When the credits rolled on Spike Lee's Oldboy, I looked at my watch and was surprised to see that the film had run 15 minutes shy of two hours. This meant that it was 15 minutes shorter than the 2003 Korean film on which it is based, but it sure doesn't feel like it. Park Chan-wook's film was a ludicrous revenge story that succeeded purely because of the director's stylistic verve and the fact that he maintained an exhilarating sense of forward momentum. He gave the audience precious little downtime in which to contemplate how nonsensical it all was, as we were constantly being wrongfooted by the film's outrageous twists or bravura sequences.

This new version of Oldboy lacks both that kinetic energy and the element of surprise, and therefore it plays as a bewilderingly half-hearted exercise in reproduction, never exhibiting any understanding of what made the original film work. The story is basically the same, despite early talk that it would adapt the Oldboy manga rather than the film (only Park's film appears in the credits). Josh Brolin plays a feckless, heavy-drinking advertising executive called Joe Doucett (a nod to the original film's Oh Dae-su?) who is introduced to us in 1993, blowing a major business opportunity and failing to attend his daughter's third birthday party, much to his ex-wife's chagrin. After a boozy night, Joe awakens in an anonymous motel room with no means of escape, and this is where he will spend the next twenty years, at the whim of some vengeful foe, learning from his TV that he is the prime suspect in his ex-wife's murder.

Joe's entrapment is by far the strongest part of the film. Shooting in grainy 16mm, Lee and cinematographer Sean Bobbitt accentuate the intensity and strangeness of his predicament, while Lee depicts the passing years through a montage of notable news stories. Brolin's committed and haunted performance impresses too, particularly his weary, resigned sense that he has probably done something to deserve his extraordinary punishment – when he compiles a list of enemies, it turns out to be a very long one indeed. The film only starts to falter when Joe is suddenly released, twenty years later, finding himself in a field with a phone and a wallet full of cash. This is where the machinations of the plot begin to take over, and the film gets progressively less interesting.

Pacing has never been Spike Lee's strongest attribute, and he is entirely unsuited to a movie that really needs to power through its plot points. This Oldboy is lumpy and uneven, and too much of the film's second half feels like a film being directed by a man due to a sense of professional obligation rather than any connection with the material. The frequent and bloody violence doesn't possess any impact, the humour is off and the characterisation is dismal. The relationship between Joe and Marie (Elizabeth Olsen) is required to carry a great deal of emotional weight, but her character is so perfunctory this element of the plot is rendered useless (to be honest, this is a bad movie for women generally), while Samuel L. Jackson's reunion with Lee consists of some loud outfits and little else.

Perhaps the most misguided decision the filmmakers have made is to make Joe antagonist a preening, camp weirdo played by comically overmatched Sharlto Copley. Again, a premise this silly needs to be sold to us with a genuine sense of malevolence, but Copley's performance only induces giggles and bafflement. Will anybody who reaches Oldboy's botched ending care about the plot's supposedly shocking resolution?


Why did Spike Lee make this film? His last mainstream effort – 2006's thoroughly enjoyable Inside Man, also his last film to get a UK cinema release – allowed the director to bring his own sensibility to the material, shaping it with a New Yorker's sense of perspective, humour and place, but Oldboy isn't even set in Lee's home state. It's a terrible mismatch of filmmaker and project, and it reaches cinemas half-baked, butchered and with no sense of why it has been made or who it is for. It's even the first of Lee's films to come with the credit "A Spike Lee Film" rather than "A Spike Lee Joint," a decision he apparently made after an unhappy post-production process in which his 140-minute version was cut down. He may as well have taken his name off it altogether, because it's hard to detect his fingerprints anywhere on this anonymous and unnecessary retread.
Philip Concannon
Share
‹
›
Home
View web version