Review - I'm Not There 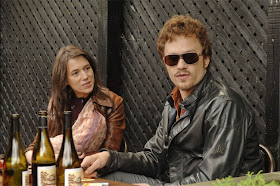 It's much easier to love the concept behind I'm Not There than it is to love the film itself. Todd Haynes' multilayered quasi-biopic is, as the opening credits tell us, "inspired by the music and many lives of Bob Dylan", but Dylan himself – as the title suggests – is not there. Instead, we are presented with six wildly different characters, each of whom personify a different aspect of his personality and career. The actors selected to play these roles range in age from 12 to 58, one is a woman while another is a black, and none of them are actually called Bob Dylan. It's an audacious conceit, with Haynes mixing styles and genres, overloading the film with references to Dylan's career, and fracturing the standard musical biopic structure beyond recognition. And all of this adds up to – well, what exactly?

I have to confess I'm Not There left me feeling frustrated, exhausted and bewildered when its kaleidoscopic tour of Dylan's world had finally concluded. Of course, films as imaginative and ambitious as this should be celebrated and encouraged, but there is something to be said for a little structure, and as Haynes' versions of Dylan overlapped and criss-crossed without ever seeming to take us anywhere significant, I felt my patience wearing thin. I'm Not There is a film which throws everything it has at the audience, and it damn near tears itself apart in the process; but could this film have been made in any other way? How could any straightforward biopic do justice to one of the most iconic, analysed and debated figures of the 20th century; a man who has continued to adopt and shed identities throughout his career, slipping off in a new, unexpected direction as soon as anyone threatened to pin him down?

In that light, Haynes' decision to employ such a variety of actors makes sense, but the finished product never quite coheres. The first Dylan stand-in we spend some time with is a young black boy (the superb Marcus Carl Franklin), who rides the boxcars, calls himself Woody Guthrie and carries a guitar case emblazoned with the slogan "This Machine Kills Fascists". Another version of Dylan is a Greenwich Village protest singer named Jack Rollins (a surprisingly ineffective Christian Bale), who later becomes a preacher, and Heath Ledger plays a womanising, misogynistic actor who is starring in a film about the aforementioned Jack. A couple of the film's sequences are depicted in black-and-white, with Ben Whishaw playing an introspective poet styling himself after Arthur Rimbaud, and Cate Blanchett is Jude Quinn, the "Judas" who alienated much of his fanbase when he went electric in the 60's. Finally, there's Richard Gere – looking about as confused as I was – who turns up as Billy the Kid in a surreal and deathly dull vision of the west.

No attempt is made to connect these segments in any way (beyond the obvious link between the Bale and Ledger stories), and while they seem to exist in a more or less chronologic order, Haynes keeps mixing the order up, hopping between his characters with little rhyme or reason as far as I could see. He creates a fantastically detailed milieu for all of his Dylans to inhabit, and each of their individual narratives is marked by a separate aesthetic – Fellini-esque black-and-white for Blanchett, faux-documentary for Bale, 70's-era western for Gere, etc – but while Haynes' magnificent cinematographer Edward Lachman makes everything look equally sensational, the relative quality of each strand is damagingly inconsistent.

The best of the bunch is the one that has received most attention so far, with the praise surrounding Blanchett's uncanny channelling of Dylan proving to be entirely justified. Her section of the film is closely aligned with DA Pennebaker's 1967 documentary Don't Look Back, as Jude teases the British press (personified by BBC reporter Bruce Greenwood) with a series of non-sequiturs and riddles; and Blanchett comes closer than anyone to really capturing the spirit of the man, with the dry humour and cocksure swagger of her performance being brilliantly observed. Ben Whishaw does a pretty solid Dylan impersonation too, but he hasn't been given much of a role, as he is simply asked to sit behind a desk, facing the camera as if addressing an interrogator, and spout a variety enigmatic lines.

Of the other Dylan stories, the only one which really made a mark on me was the 'Robbie' sequence, featuring Ledger and Charlotte Gainsbourg as the couple whose marriage is crumbling. It's the nearest the film gets to the singer's Blood on the Tracks period, and Gainsbourg's touching performance is the closest the film has to an emotional centre. Perhaps that's the chief problem with I'm Not There; with so many Dylans whizzing around, each of them bearing so much symbolic weight, none of the six key figures ever manage to come alive as living, breathing characters. The film is all about what the characters represent, rather than getting down to who they are, and so the film is left feeling like a superficial exercise in which the few rare instances of emotional spark are provided by minor characters like Gainsbourg, or the Joan Baez-type played by a spot-on Julianne Moore. That feeling of cerebral disconnectedness is accentuated by the maddeningly allusive nature of I'm Not There, an aspect of the film which may be the biggest hurdle for those who aren't fully steeped in Dylan lore. I know enough about his life and work to pick up on the majority of the film's citations, but the sheer volume of allusions and in-jokes is rather overwhelming, turning I'm Not There into a reference-spotting game for Dylanites which non-fans may not want to play.

So what does all of this tell us about Dylan that we didn't know before? Not a great deal, I fear, and perhaps that's the very reason Dylan gave this project his blessing – it's a film which explores every aspect of his life while still allowing him to remain an enigma at the end of it. Personally, I'd rather stick with Martin Scorsese's magnificent 2005 documentary No Direction Home, but I still wouldn't want to discourage anyone from seeing I'm Not There, if only for the number of individually superb moments which are scattered throughout the picture. Ultimately, your enjoyment of Haynes' film will depend on your knowledge of Bob Dylan, the more you bring to the picture the more you'll get out of it, and there may be much more to be gained for those willing to dig under the film's surface. For this reviewer, though – a fan but hardly a fanatic – it doesn't seem like a puzzle worth solving.