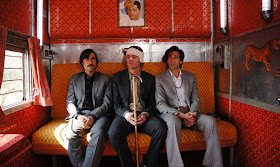 The Darjeeling Limited is the latest film from Wes Anderson, and by this stage most viewers will know exactly what to expect from it. His style has barely evolved from his debut Bottle Rocket, and The Darjeeling Limited is the same blend of stilted compositions, strained deadpan humour, and colourful production design. It's not a mixture which has ever been to my liking, and the director's over-fussy style has grown increasingly ineffective with every film since Rushmore. Still, a number of people seem to like the guy's work, and with every new picture I sit in anticipation, hoping to finally get Wes Anderson. It hasn't happened yet, but at least The Darjeeling Limited feel like a minor step in the right direction.

Even if Anderson's approach hasn't altered much since his first films, the scale of his pictures has tended to grow more ambitious, and with The Darjeeling Limited he gives us more than just the main feature. Hotel Chevalier is a 13-minute short film which stars Jason Schwartzman as Jack Whitman, an American staying in the titular hotel, who receives a surprise visit from his nameless ex-girlfriend (Natalie Portman). She's covered in unexplained bruises and there's tension between them, but they still have sex to the sound of Peter Sarstedt's Where Do You Go To (My Lovely), and they end the film standing on his balcony, staring out across the city.

It's a slight but enjoyable little film, and it serves as a handy prologue to The Darjeeling Limited, with Schwartzman playing the same character in the film, and making a number of references to his Paris experience. Jack is one of three brothers taking a train journey through India, a trip has been organised by Francis (Owen Wilson), in order to reunite him with Jack and Peter (Adrien Brody) for the first time since their father's funeral one year earlier. Francis wants this to be a "spiritual journey", but he has planned every step of it in ridiculously minute detail, even bringing an assistant (Wally Wolodarsky) along to produce laminated itineraries for the brothers every morning. It's tempting to view this characterisation as a sly self-commentary from Anderson on his own directorial style, with Francis squeezing the life out of the brothers' experience through his overzealous pre-planning.

That's the viewer projecting extra dimensions onto the character though, and as written they have little depth, each being given a couple of affectations and props in lieu of proper development. Francis is heavily bandaged after a motorcycle crash, Jack has a droopy moustache and spends the whole film barefoot without anyone seeming to notice, and Peter wears his late father's sunglasses despite the prescription lenses – even Francis' assistant is distinguished more by his alopecia than anything else. The actors don't bring a great deal of substance to their roles – although Brody gives the best performance of the three – and they aren't helped by Anderson's curiously standoffish direction. He's always keeping the characters at arm's length, never allowing us to get close enough to share in their emotions; and his writing is often both trite ("I guess I've still got a lot of healing to do" says the scarred Wilson after removing his bandages) and overly literal (the brothers have to discard their emotional luggage by, you know, discarding their luggage).

There are pleasures to be found in The Darjeeling Limited, though, and many of them are the result of Anderson's decision to set his film in India. The director has a good feel for the atmosphere of the country, and his work here is a little fresher and looser than it has been in the past, with a trip to a small Indian village providing The Darjeeling Limited with its only note of real emotion. It occurs when the brothers come across a tragic incident in which a local boy is killed, despite their attempts to stage a rescue, and they are invited to his home in order to attend his funeral. Anderson directs this sequence with admirable sensitivity, and he is aided by an astonishing wordless performance from the great Indian actor Irrfan Khan as the boy's grieving father. Anderson's depiction of his host country's society and culture isn't always as finely handled (would an Indian girl really fuck a stranger on a train as easily as one does here?), but this central vignette alone is classy and touching, and it caught me by surprise.

After that, the brothers' reunion with their estranged mother (Angelica Huston) doesn't give The Darjeeling Limited much of a climax, and while the late train carriage montage is a superb set-piece, I once again left a Wes Anderson picture feeling like I should be getting more from it. At 91 minutes The Darjeeling Limited never has time to be dull, and it's certainly a major improvement on the bloated The Life Aquatic, but Anderson's visual vocabulary remains infuriatingly limited. He continually resorts to the same slow-motion tracking shots, whip-pans and close-ups of the three main characters staring into the camera, and it's all set to the usual medley of 60's pop songs. Wes Anderson is unlikely to advance as a filmmaker until he starts to shed some of these stylistic tricks, or at least until he learns to adapt them so they don't feel so cripplingly routine. Then, perhaps, he'll finally make a film in which the substance matches the style, and hopefully I'll finally be able to see what others have seen in this intriguing but continually frustrating director.
Philip Concannon
Share
‹
›
Home
View web version