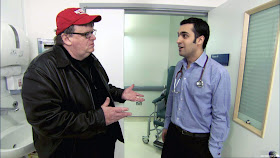 Michael Moore's Sicko opens with footage of a man named Adam who is sitting at home and is sewing up a wound in his own leg. We are then introduced to Rick, a likeable character who severed the tips of two of his fingers with an electric saw, and when he arrived at the emergency ward he was given a choice: he could have his middle finger reattached for $60,000, or he could have the ring finger reattached for a mere $12,000. Being a romantic type of guy, Moore jokingly suggests, Rick chose to save his ring finger. These two unfortunate souls are among the millions of Americans who don't have sufficient health insurance, but Moore's film isn't really about them. Instead, Sicko focuses on the vast majority of US citizens who do have insurance, but who are prevented from getting the care they need by a corrupt system; a system that values profit above all else, and a system that smothers those it should be helping in miles of bureaucratic red tape.


Ever since he made his film debut in 1989 with Roger & Me, Michael Moore has become American cinema's agitator-in-chief. He has attacked the country's gun culture in his Oscar-winning Bowling for Columbine, and then he attacked the presidency of George W Bush with Fahrenheit 9/11, a shapeless rant masquerading as a serious documentary. Many people love Moore and his rabble-rousing ways, while others can't stand his blunt style, his preference for cheap shots, and his habit of placing himself at the centre of the story. Most people, I think, are of the opinion that Moore is a character you can love for the issues he tries to raise, while disliking the manner in which he does it. Like all of his films, Sicko is a film driven by a genuine passion and a justifiable anger at the ills of society, but it's no coincidence that this film is at its best when Moore himself takes a back seat.

Instead, many of the Americans who have suffered at the hands of this system are allowed to tell their own stories, a move which proves to be the film's trump card. When Moore advertised on his website for contributors to Sicko he was inundated with emails – over 25,000 in the first week – from people who wanted their voices to be heard, and from this large pool of protest, Moore has been judicious in his choice of anecdotes. Some of the stories in Sicko are so absurd they're almost funny, and the director knows how to milk the laughs from them. One woman recalls her HMO denying payment on an ambulance journey because it wasn't "pre-approved" – when was she supposed approve it, after she regained consciousness in her car? – while another interviewee recounts an incident in which payment for her operation was retroactively denied after an undisclosed yeast infection from some years earlier was discovered.

In an amusing way these stories highlight the ridiculous vagaries of the HMO policies, with the insurance companies searching every claim for a loophole which will allow them to deny payment. From the other side of the fence, Moore speaks to a doctor who testifies to a bonus scheme for those who make the most denials during the course of the year, and a call-centre worker is reduced to tears as she describes the pain of turning away dozens of needy applicants on a daily basis. But the real weight of Sicko's opening half lies in the more tragic stories Moore uncovers. He profiles Larry and Donna, a middle-aged couple who have been almost bankrupted by the cost of their healthcare, and who have been forced to sell up and move into their children's spare room. Moore later interviews a woman whose husband died from cancer of the kidney after being repeatedly denied treatment; and, most shockingly of all, he introduces us to Dawnelle, a mother whose 18 month-old daughter died because the hospital she frantically sought treatment from was not affiliated with her health insurer, and insisted she go elsewhere.

These frank interview pieces are harrowing and deeply moving, and Moore wisely avoids intruding on their grief. The director's style in the opening half of Sicko is so much more restrained and sensitive than we have become used to, perhaps because he realises that the honesty and emotion provided by the people he has spoken to is enough, and to over-egg the pudding would be counterproductive.

However, the usual Moore caveats gradually seep into the picture as Sicko moves into its second hour. After identifying the problem, Moore looks abroad for the solution, heading to Canada, England, France and Cuba to show his fellow Americans how a health system should be run. Moore's aim is to prove that US citizens have nothing to fear from free universal health care, despite repeated warnings to the contrary (in one gem from the archives, Moore produces an audio clip of then-actor Ronald Reagan warning people about the dangers of socialised medicine), but the simplistic manner in which he argues his case is infuriating. Wherever Moore goes he finds nothing but happy patients and contended doctors; the waiting times are short, the government is giving everyone what they want, and the fees are either tiny or non-existent. Much of the claims made in favour of these countries' health services may well be true, but Moore's decision to paint them as near-utopian societies where the system works flawlessly is reductive to the point of being offensive. Many documentarians would produce hard facts and statistics to back up their argument in a case such as this, to offer a compare-and-contrast with the American system, but most of the evidence Moore supplies is anecdotal. He asks one or two people for their opinion and we are expected to take their answers as gospel.

Much of this section of Sicko is hard to swallow. The scenes involving the director walking around an NHS hospital with his face a mask of wide-eyed naïveté are amusing but trite; we don't hear anything about underpaid nurses working 18-hour+ shifts, or the long waiting lists, or the poor levels of hygiene. Certainly, few would dispute that the British system generally works better for the people than the American one, but no system is without its flaws and its compromises, and Moore should at least pay lip service to these considerations. In France he addresses the notion that a universal healthcare plan would result in higher taxes by talking to one middle-class couple who tell him that they're perfectly happy with things the way they are - there you have it, case closed. The lack of a dissenting voice against Moore's own thesis has long been a factor in the director's work, but it's still disappointing to see a filmmaker as intelligent and capable as he is resorting to such lazy journalism and obvious manipulative tricks.

Of course, most people have already heard about the big set-piece with which Moore brings the film to a close, taking a boatload of ill 9/11 rescue workers out to Guantanamo Bay, the one place on US soil which offers its inhabitants free healthcare. It's typically attention-grabbing piece of theatre from Moore, but it's also a stupid stunt which has no relevance to the issue at hand. Moore then takes his 9/11 volunteers to Cuba where they are offered top-notch care and partake in a mawkishly staged love-in with Cuban fire-fighters. Is Moore really holding up Cuba as a paragon of virtue and generosity? Given that country's record on civil liberties and human rights, Moore should know better than to depict it in such glowing and uncritical terms, and everything about these sequences rings resoundingly false. By the time the end credits have rolled on Sicko, the director has again resorted to all of his usual tricks, including a shamelessly self-aggrandising moment when he reveals himself as the benefactor who anonymously wrote a $12,000 cheque to help his biggest critic in a time of need. The subject under discussion here is too important for Moore to make himself the star.

Few filmmakers frustrate me as much as Michael Moore. As a director he is sloppy, repetitive and shamefully blasé with the facts; but for all his faults, Sicko is a bluntly effective picture. Its power is derived from the personal testimonies of those who have been betrayed by the healthcare service they have placed their faith in, and in its own unsubtle way Sicko cuts to the heart of an essential truth which is indisputable. When a woman must watch her infant child die, in the richest country in the world, because she has been turned away from a hospital, then the system is seriously broken; and whatever you may think of Michael Moore or his methods, it's hard to argue with this persuasive call for change.