Take a look at the release schedules for the next couple of months and you'll notice plenty of American films with one thing on their mind: the war on terror at home and abroad. Some of the forthcoming pictures – like The Valley of Elah or Lions for Lambs – are high-profile propositions, with A-list talent using their clout to ensure stories far from the usual mainstream fare can be told. On the other hand, the war in Iraq has given rise to a number of documentaries and low-budget features purporting to give an edgier, less sanitised look at the conflict. Two films that neatly represent these philosophies are Rendition – a star-packed drama from the first category – and Redacted, a film which takes a daring, formally innovative approach to tackling this thorny subject matter. I've no doubt that both of these films were made with utter sincerity and the best of intentions from all concerned, but only one of them feels like it has anything useful to say, and it's not the one which most people will see. 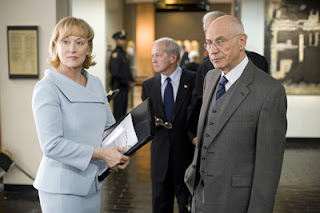 Rendition concerns itself with the practice of "extraordinary rendition", a policy that allows the United States to extradite any suspected terror threat to an unclassified foreign jail where they will be subjected to severe interrogation methods. This is what happens to Anwar El-Ibrahimi (Omar Metwally), an Egyptian now living in America, who is on his way home from a business trip when he is covertly snatched under the instruction of CIA bigwig Corrine Whitman (Meryl Streep). He is swiftly despatched to North Africa where he is strapped to a chair, beaten, electrocuted and water-boarded in a dingy cell by a tough police captain (Igal Naor), while an inexperienced field agent (Jake Gyllenhaal) looks on uneasily. Meanwhile, Anwar's heavily-pregnant wife Isabella (Reese Witherspoon) is frantically looking for answers back home, and she turns to an old flame (Peter Sarsgaard) for help.

This is one of those criss-crossing films, like Syriana or Babel, which always seems to have a lot of incident happening at once, but which doesn't add up to a great deal at the end of it. Rendition has been directed by Gavin Hood, the South African filmmaker who inexplicably won an Academy Award for his dreary tearjerker Tsotsi, and he's at it again here, crafting another tepid drama which does just enough to suggest a real seriousness, while never being daring enough to explore the issues in any depth. The characters are simplistically drawn; Gyllenhaal's moral dilemma and eventual crisis of conscience feels trite, Streep's character is a one-note villainess (resulting in one of her worst performances), and Witherspoon – her natural perkiness drained away – is given nothing to do except to look worried to a variety of degrees.

Hood is a director who never takes a scalpel to a job where a sledgehammer is available. His overheated direction requires lustrous lighting in every scene and an orchestra of ethnic wailing on the soundtrack which reaches cacophonic levels at the picture's most melodramatic moments; and this glossy veneer is layered on top of a contrived screenplay, by Kelley Sane, which is pitifully one-dimensional. The closest the film comes to any sort of debate is when Streep tells us that 7,000 people are alive in London tonight because of information gained using these methods, but the film has already painted her as such a dark and untrustworthy character we are encouraged to boo and hiss no matter what she says. Rendition might have been more interesting if it had suggested that Anwar is not as innocent as he appears to be, but there is no place for ambiguity among this film's tidy moral judgements.

A few cast members manage to make the most out of their appearances here. Igal Naor is excellent as the torturer working on the similarly impressive Metwally, and in the American strand of the story both Sarsgaard and Alan Arkin are dependably fine. Hood and Kelley do manage to throw one surprising element into the mix, with a late twist changing our perception of the concurrent storylines, but it's the only unexpected move this blandly competent film makes. Rendition wants to shock us with its ripped-from-the-headlines premise, but is any of this stuff really shocking by this stage? In any case, the film is not damaged by the familiarity of its subject so much as the lack of perspective or insight it brings to the issue, and watching a batch of sketchy characters spouting platitudinous dialogue for two hours is a resolutely unedifying experience. Of course, we want to see Hollywood filmmakers grasping the nettle and tackling the most pertinent and contentious subjects affecting the world we live in today, but not if it results in movies like Rendition.

Maybe we need a new type of film to really grapple with this disastrous war and its messy consequences. Brian De Palma's Redacted heads straight to the frontlines of Iraq to look at the way war adversely affects those immediately involved with it, but while the theme of Redacted may be familiar, the methods used by the director certainly aren't. Much of the story is told through the video journal being shot by Angel Salazar (Izzy Diaz), a young soldier who is documenting his experiences in the hope that the footage will secure him a place at film school. The director mixes this footage with sequences seemingly shot by a team of French filmmakers who are making a documentary named Barrage about American checkpoints in Iraq (these scenes come complete with French subtitles, philosophical voiceover and the haunting score from Barry Lyndon). On top of all this, De Palma gives us (deep breath) scenes filmed on CCTV cameras, point-of-view footage from the soldier's helmet-mounted cameras, Iraqi news reports, still photographs, webcam conversations with home, clips from Youtube-like sites and personal blogs. Mercifully, Redacted plays a lot better than it sounds. 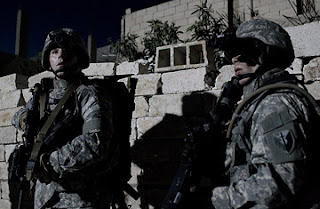 Redacted is a fictional story which has its basis in fact. In March 2006 Abeer Qassim Hamza, a 14 year-old Iraqi girl, was raped and murdered by American soldiers who then killed her parents and her 7 year-old sister, before setting fire to the bodies. It was one of the most shocking incidents this conflict has produced, and two of the soldiers involved were later handed 90 and 100 year jail sentences. De Palma's Redacted screenplay bears a striking similarity to this incident, and the film itself bears a striking similarity to one of the director's own best films: 1989's Casualties of War. The characters in this film are drawn in clear strokes, each fitting a standard type for the genre. Angel Salazar is the likable private who acts as our eyes, Lawyer McCoy (Rob Devaney) is the straight-up soldier whose conscience is tested by the actions of others, Gabe Blix (Kel O'Neill) is the aloof intellectual, and the final two characters are the ones who set the chain of events in motion. Reno Flake (Patrick Carroll) is a wild-eyed hothead who has been wound up for violence and is desperate for some action, and his overweight pal BB Rush (Daniel Stewart Sherman) is a sex-mad idiot who will happily go along with whatever Flake suggests.

The catalyst for their fateful attack is the sudden death of the platoon's popular sergeant, who is killed by a booby trap. De Palma first shows us the skilfully-staged event through Angel's camera, and then we see it replayed from a different angle on an insurgent website, the death having been filmed by those who planted the bomb. This incident sets the squad on edge, and it pushes Flake and Rush towards thoughts of vengeance. During a drunken poker game they decide to return to a house they raided earlier, and to rape the teenage girl they see passing through their checkpoint every day (whom Rush continually searches in a lecherous fashion). This sequence, as filmed through the camera on Salazar's helmet, is painful to watch; the night vision giving the scene an eerie glow and accentuating the fear and panic in the eyes of the girl and her family.

De Palma has never really been a subtle director, and the points he makes in Redacted are obvious, but the film has an angry potency which is tough to ignore. The director made one of his worst films last year with The Black Dahlia, but he seems to be fully engaged with this story in a way he hasn't been in some time, and his ability to juggle the many media involved in the film successfully helps to carry Redacted through its rough patches. There's an inevitable messiness about the picture's structure at times, and a sense of contrivance in its tricksy shooting style, but for the most part De Palma creates an authentic and involving picture of a soldier's life in Iraq, and the performances (particularly from Devaney, Carroll and Diaz) are very strong.

Ultimately, the reason Redacted works is the reason we criticise many films – it looks just like TV. There's something unsettling about watching this violent story depicted through the media which has filtered everything we have seen about the war in Iraq to date, and while many may decry Redacted as nothing more than a gimmick picture, I think it has enough of a payoff to justify the choices the director has made. This is far from a perfect film - and De Palma might have been advised to show a little restraint in places (one US soldier is beheaded in a very explicit manner, and the final few minutes consist of photos of dead Iraqi babies) - but it is a film aimed at shaking us up, and I doubt anyone who sees Redacted will be completely unaffected by it. It left me feeling upset and angry, and a few days after watching it much of the film has lodged itself in my memory. Redacted isn't anything like the definitive cinematic take on the war on terror, but at least it feels like a step in the right direction.
Philip Concannon
Share
‹
›
Home
View web version