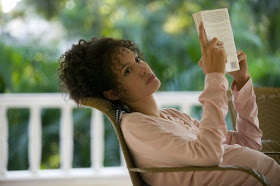 The arrival in cinemas of A Mighty Heart is a welcome reminder that Angelina Jolie – humanitarian, mother, and all-round A-list star – is also a very capable actress, and I’m sure I’m not the only one who needed to be reassured of that fact. Over the past few years her high profile has been linked more to her various activities off-screen rather than her work on it, but is that a surprise when her choice of roles since 1999’s Oscar-winner Girl, Interrupted has been so dreadfully poor? With brainless fare such as the Tomb Raider movies, Original Sin, Alexander and Mr and Mrs Smith on her recent CV, Angelina the celebrity has well and truly eclipsed Angelina the actress. Fortunately, her starring role in A Mighty Heart goes some way towards redressing the balance.

A Mighty Heart is the story of Mariane Pearl, the woman who joined her journalist husband on his trips through Afghanistan and Pakistan shortly after 9/11, but when she left Karachi in February of 2002 she was a widow. Her husband Daniel (played, mostly in flashback, by an uncannily cast Dan Futterman) had been investigating links between shoe bomber Richard Reid and Pakistani intelligence agencies when he was abducted en route to a meeting with a Muslim cleric. He was held for nine days before being executed; his brutal decapitation being captured on videotape and released onto the internet for viewing by a shocked and repulsed world. His attractive wife, who was heavily pregnant at the time, naturally became the prime focus of attention for the world’s press, but Mariane maintained a calm and dignified façade in the media spotlight, and she later wrote about her experiences in the book from which this film takes its name.

This is a risky role for Jolie to take on, a role she hardly seems a natural match for, but under the careful direction of Michael Winterbottom she manages to confound every expectation. Jolie appears here with a black corkscrew wig, darkened skin and tinted contact lenses to overcome the physical disparity between herself and the French-Cuban Mariane, and this external transformation does wonders for her. For one thing, I’m not sure if Jolie has ever been more naturally beautiful on screen, but the second and more pertinent benefit is the way it allows her to slip inside a character for the first time in a very long time. This is a sensitive and unshowy piece of acting; Jolie plays Mariane with a conviction and intelligence, internalising her character’s emotions and never slipping into hysterics despite the devastating nature of the story. Her performance is the centre of the movie, but it doesn’t dominate it, and her quiet display of courage and resolve – even as hope for Daniel’s safe return slips rapidly away – is subtly shattering.

There are two moments in the film in which Jolie is allowed to crack; the first is a quiet scene in which she weeps softly in the garden, before composing herself and re-entering the house, the second is a volcanic explosion of pain and dismay when Mariane learns of her husband’s grisly fate. Jolie pounds the wall and collapses on the floor screaming “No! No! No!”, but Winterbottom shoots both of these emotional scenes from the rear, keeping Pearl’s tears away from the viewers and making us feel like intruders on her grief.

Winterbottom’s no-nonsense approach to A Mighty Heart is refreshing. He is a director who is as inconsistent as he is prolific, and his latest picture still bears many of the frustrating lapses that always seem to mark his work, but he makes the film tight and compelling nonetheless. Much of it plays like a procedural, following the work of the Karachi police force (led by a superb Irrfan Khan), a couple of American investigators and two of Daniel’s Wall Street Journal colleagues as they hunt for clues. The trail is bewildering, replete with false leads and red herrings, and it’s often hard to make sense of the way in which the search party join the dots from one lead to the next. Many of the investigative scenes are a cacophony of overlapping voices and indistinct action, which renders many of these scenes unnecessarily confusing, but on a wider scale Winterbottom manages to get across the enormity of their task, as they hunt for a single man in a bustling city of 18 million people.

For a Michael Winterbottom film set directly after 9/11, A Mighty Heart is surprisingly apolitical, although Winterbottom and screenwriter John Orloff do pay some attention to the pervading climate. Reference is made to torture being used as a method of interrogation, with Will Patton, whose performance seems oddly disconnected from the rest of the film, saying “I’d like a front-row seat when they hang them by the feat and beat them with sticks”; and Archie Panjabi gives a telling performance as Pearl’s colleague, who is constantly aware of her status as an Indian in Pakistan. But these are underlying themes, and the central focus of the film remains fixed on Mariane, as it should be.

Ultimately, A Mighty Heart is distinguished most by what it isn’t – it isn’t a vanity project, it isn’t a glossy take on a tragic story, and it isn’t a cheaply manipulative tearjerker. Some might accuse the film of slipping into sentimentality in its final fifteen minutes, but I felt it had earned the emotions stirred up by this climax; a climax I found incredibly moving and satisfying. A Mighty Heart is one of Winterbottom’s most impressive films, and it is something of a redemption for its leading lady, but above all this film acts as a fitting tribute to both Daniel and Mariane Pearl. It leaves us feeling sad and thoughtful, but above all we are left with a sense of great admiration for their courage and dignity in the most horrific circumstances; and in the case of Mariane, one can only marvel at her extraordinary grace under pressure.
Philip Concannon
Share
‹
›
Home
View web version