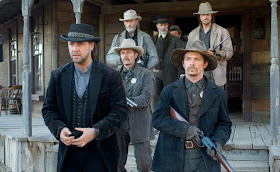 It has been a while since Hollywood produced a truly great western – in fact, it has been 15 years now since Clint Eastwood's Unforgiven became an instant modern classic – and the genre has struggled to escape from that film's long, imposing shadow ever since. A couple of films have come close to the high bar set by Eastwood, like Kevin Costner's undervalued 2003 film Open Range, but most have come off looking like poor imitations of the classics of yesteryear. With that in mind, perhaps it makes sense for today's filmmakers to reach back into the past for their inspiration, and that's what James Mangold has done by dusting off the 1957 Delmer Daves film 3:10 to Yuma for a modern audience.


3:10 to Yuma is the kind of film which is ripe for the remake treatment. Instead of trying to update old masterpieces, today's directors should set their sights on the second tier of films which offer a solid premise, but which also offer room for improvement. The original adaptation of Elmore Leonard's short story is a good film rather than a great one; it suffers from being rather on the slight side and displays some creaky plot mechanics. For this 50th anniversary version, Mangold and the screenwriting partnership of Michael Brandt and Derek Haas have expanded on the original premise, upping the action quotient and adding in the requisite 21st century cynicism and moral ambiguity. Those creaky plot mechanics, alas, remain intact.

For the most part, 3:10 to Yuma sticks rigidly to the original framework, pitting upright citizen Dan Evans (Christian Bale) against ruthless outlaw Ben Wade (Russell Crowe). The film opens with Evans' barn being set alight, almost killing his horses, by a landowner who wants him off the property. The age of the railroad is coming and Dan's land is worth more without him and his family inhabiting it. Dan's farm is failing, his water supply has been cut off, and he owes money left right and centre; so when a chance encounter hands him the opportunity of making $200, he jumps at the chance. All Dan has to do is join a gang which is escorting Wade to a town called Contention. There he will be put on the titular train, and he will be sentenced to hang for the twenty-two robberies which have cost over $400,000 and countless innocent lives.

It sounds like a relatively straightforward task, but it is a journey which is fraught with danger. Wade's gang (led by an outstanding Ben Foster) is hot on their tail, and despite being shackled and unarmed, Wade is still capable of taking lives with ease and great relish. The ever-decreasing group of men must also negotiate a nighttime encounter with Apaches and a battle with some unscrupulous railway men (including an incongruous Luke Wilson cameo). These encounters occur during the middle section of the picture, which is where Mangold makes the most of the extra running time afforded to him by this remake. His staging of the frequent shoot-outs is generally confident and lively (although the murky Apache battle barely registers), and from the first major set-piece – a raid on a bullion wagon, armed with an old-style Gatling gun – the director keeps things exciting and violent.

However, 3:10 to Yuma's ballistic elements are not the film's strongest suit. The meat of the story lies in the tension between Wade and Evans - the animosity which grows into a grudging respect, and which gradually sees the pair forming an uneasy alliance. Both characters are stock types – Wade is the ruthless killer with a poetic, sensitive side; Evans is the decent family man trying to prove his worth – but Crowe and Bale are two of the best actors working in Hollywood right now, and they bring plenty of heft to their potentially slight parts. Crowe is superb, playing his villainous role with a devilish glint in his eye, but Bale (what an extraordinary run of form he has been on recently) matches him stride for stride in the perhaps more difficult role. Hobbled by a wooden stump where his left foot should be, the development of Dan's moral fortitude is brilliantly played by the actor, and his growing stature in the eyes of his son (a fine Logan Lerman) is a satisfying aspect of the picture.

In fact the whole cast is great (Peter Fonda delivers a fantastic, grizzled cameo), and their authentic, rough-hewn performances keep us the atmosphere grounded in the heat and dust of the old west. But the story is problematic in parts, and while the overall shape of it is OK, it turns on a couple of plot points which are hard to swallow. First, the manner in which Ben Wade gets himself caught is perplexingly cheap – when he has already been established as a man far more intelligent and cunning than most around him – but it sets the plot in motion so we'll let it slide. However, the twist in the final act is a howler, with Wade's redemption coming about in a single scene – seemingly prompted by a single line of dialogue from Evans – and his actions after this jarring switch never ring true. Earlier in the film young William pleads to Wade's better nature, claiming that he "ain't all bad", but Wade denies this even though we know it to be true. 3:10 to Yuma might have offered a far more interesting experience if it had allowed its villain to remain just that, and challenged Dan Evans to rise to the task. Sometimes, particularly in this genre, you just want to see the good guys putting the bad guys away.

The final twenty minutes is explosively staged, but the curious shift in Wade's behaviour saps its intensity, and the wildly implausible nature of the gunplay (just how many bullets do those six-shooters hold?) is a bit much at times too. The finale errs on the shoddy side, but for the most part 3:10 to Yuma grips and entertains. Mangold has brought the genre up-to-date with plenty of action and excitement, but at its heart the film retains an old-fashioned western spirit. It's about loyalty and honour; it's about taking the tough choices and seeing them through to end; it's about a man doing what a man's gotta do – the kind of things these films used to tell us all the time. 3:10 to Yuma falls some way short of being a great western, but at least we can take pleasure in the fact that Mangold has kept it on the rails for most of the journey.
Philip Concannon
Share
‹
›
Home
View web version