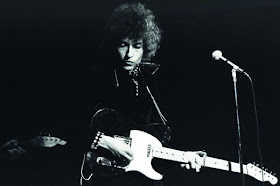 “He’s pathetic”, “It makes you sick listening to this rubbish”, “He spends too much time on that wretched harmonica”. These English teenagers are delivering their verdict on the performance they’ve just seen from Bob Dylan, who they see as a traitor for turning his back on the protest songs and acoustic style with which he made his name. His performances on his UK tour are met with heckles and jeers by many in the crowd and Dylan is understandably distressed. “I just wanna go home” he tells his band after one show.

The UK tour was probably the lowest point of the five-year period covered by No Direction Home, an extraordinary new documentary on Dylan, and it’s a point that director Martin Scorsese returns to again and again, leading up to the infamous ’Judas’ shout which ends the film. Heroes are built up in order to be torn down, and Scorsese depicts this as the inevitable price that a young artist has to pay if he wants to develop his craft, explore new avenues and try to take his music in a new direction. Dylan doesn’t seem to care who he angers or what people think, he just wants to produce great music and if they don’t like it then that’s their problem.

It isn’t hard to see what attracted Martin Scorsese to a film about Dylan. Both are iconic figures in their respective art forms yet both have always been on the outside looking in, mavericks who have always been a little too abrasive and unpredictable to be fully embraced by the mainstream, and both are hugely talented artists who have a deep and abiding passion for music. This is probably why No Direction Home is such a wonderful film, Scorsese has always been at his best when he finds a strong connection with the main character in his film and this four-hour documentary finds the director on peak form.

The film is divided into two parts. Part One traces Dylan’s Minnesota roots and the early stages of his musical education. His influences were a wide mixture of musical styles and included such artists as Billie Holliday, Hank Williams, John Jacob Niles and, his biggest influence of all, Woody Guthrie. Scorsese has collected an incredible wealth of footage and he gives us generous clips of all these artists in action. “He was like a sponge“, says Tony Glover, “picking up people‘s mannerisms, accents“, and Scorsese puts together a lovely sequence in which clips of a number of artists are followed by performances by the young Dylan in which he has clearly picked up the style and inflections of the previous singer. The first part continues to chart Dylan’s rise to prominence but success doesn’t last forever, as we have been warned by the constant glimpses of those UK performances.

The second half of No Direction Home deals with Dylan’s struggle to handle the expectations of his new status. His early protest songs and appearances at politically charged events soon had people labelling him as the voice of a generation but Dylan was clearly not comfortably with this position. His passion was for the music rather than the politics and Joan Baez (who contributes some illuminating interviews) recalls how she could never persuade him to devote his attention to political issues as much as she wanted. “Are you going to participate in the demonstration tonight?” he is asked by one reporter, “I’ll be busy tonight” Dylan replies with a sly smile. His encounters with interviewers also provide some of No Direction Home’s highlights as he attempted to avoid being pigeonholed by the media. In one sequence Scorsese puts together a number of clips from press conferences in which Dylan tries to avoid answering inane questions from the assembled reporters such as “Why do you think you’re popular”, “How many protest singers are there in America?” and “Do you think you’re the ultimate beatnik?”. Much of the time the clearly uncomfortable Dylan mumbled sarcastic answers to these queries and this sequence is often very funny.

Dylan just wanted to concentrate on his music and described himself as a “musical expeditionary”, but the resistance he faced when attempting to explore new musical avenues forms much of the film’s second half. Scorsese uses Dylan’s consecutive performances at the Newport Folk Festival to show how the public reaction turned on him. His 1963 performance, which ends part one, is a triumph but his 1965 appearance so angered the audience and musicians that Pete Seeger threatened to cut the amplifier cords with an axe. The contrast between the highest and lowest points of No Direction Home couldn’t be greater. Scorsese completes his musical journey after the final UK performance and shortly before the motorcycle crash which led to his semi-retirement. The film finishes on a triumphant note with Dylan emerging to a cacophony of boos and comes up with the only logical response; “play it fucking loud” he tells the band, and they launch into a version of Like a Rolling Stone which turns the jeers to cheers.

Throughout No Direction Home we remain completely transfixed as Scorsese is in full control of this remarkable material. His selection of footage is outstanding and his legendary ability to fuse the music with the images is as good as ever. Some viewers may find fault with the film, perhaps pointing to the fact that the film fails to make any direct mention of drug use and little talk about his personal relationships (including his marriage), but when the material in the film is so priceless it seems ridiculous to complain. No Direction Home is a breathtaking film which provides the most telling portrait yet of Dylan and confirms Scorsese’s status as the greatest filmmaker of his generation. Two of the 20th century’s most important cultural icons have come together on this project, and the result is every bit as momentous as you could imagine.

*No Direction Home will be screened on Monday September 19th at the National Film Theatre and then will appear in two parts on Monday 26th and Tuesday 27th of September on BBC2.