Review - A History of Violence 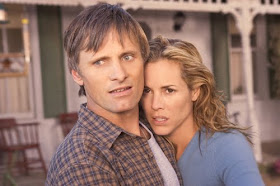 If ever a director was well suited to a film entitled A History of Violence then it’s David Cronenberg. After all, his work over the past thirty years has been littered with some of the most blood-soaked and provocative imagery in contemporary cinema, as the director has continued to explore his obsession with body horror and psychological trauma. His films have been consistently innovative, challenging and, unsurprisingly, have hardly set the box office ablaze. Now, with recognisable stars and a (deceptively) straightforward script, the studio-backed A History of Violence has been seen by some as a blatant attempt for Cronenberg to finally score a commercial hit. But don’t be fooled; while this is definitely the director’s most accessible and mainstream work since The Fly, it’s also a challenging and powerful film which handles the themes of violence and identity like no other American film in recent memory.

The plot revolves around Tom Stall (Viggo Mortensen), a man who seems to have a perfect life. He and his loving wife Edie (Maria Bello) have two charming kids (Ashton Holmes and Heidi Hayes) and he lives in a small Midwestern town which could be the set of Pleasantville. Tom owns a local diner in which he serves coffee and chews the fat with friendly locals. However, we’re aware that Tom’s life won’t be remaining so sweet for long - as an opening scene of bloodshed has already set the tone - and sure enough a pair of violent crooks enter the diner one night and are about to start shooting when Tom leaps into action, killing the pair with blistering speed and efficiency. In fact his actions are so instinctive and natural that it almost seems like he’s done it before…

All I can really divulge about the rest of the storyline is that Tom becomes something of a local hero for a couple of days and his publicity brings the sinister Fogarty (Ed Harris) to town, convinced that Tom is not who he says he is. It would be wrong to spoil any more than that, because one of the chief pleasures of A History of Violence is the way Cronenberg constantly keeps us on our toes with his crafty handling of the material. A History of Violence may seem at first glance like a generic thriller, but the various layers which are subtly piled onto the basic framework of the film make it something very special indeed.

Cronenberg’s focus here isn’t really on the plot at all. He is far more interested in exploring the way normal people react to violence and challenging the standard cinematic depiction of violent acts. As a result, the bloodshed in A History of Violence really hits us hard. When Tom kills the two hoodlums in his bar, the scene is cut and shot with a skill that John Woo would be proud of and it produces an undeniable thrill for the viewer (even Tom takes a second to glance at his gun with a look that could be read as awe). But Cronenberg won’t let us enjoy the charge of the shootout for too long before cutting to a brief shot of assailants’ lifeless bodies. One of them is lying face down in a pool of blood with half his head missing. The excitement which we were all enjoying just a second ago has now caught in our throats.

This is not the way things are supposed to be done in Hollywood action movies. The shootouts are exciting for sure, but this time Cronenberg is going to make us view the results as well. Like Michael Haneke’s Funny Games, A History of Violence is telling the viewer “if you’ve come to see violence, here it is”, and his handling of these scenes is sharp, brutal and often horrific. For Cronenberg violence is like a virus which starts to spread as soon as it arrives in the Stall family’s life. Teenage son Jack lashes out at a school bully whom he usually would run from while Edie seems to derive an erotic thrill from this dangerous new aspect of Tom’s personality. Cronenberg includes two remarkable sex scenes which brilliantly highlight the shift in dynamic between Tom and Edie. In the first, they are tender, playful and passionate together - the actions of a couple who know each other intimately - while their second coupling, which occurs after the film’s massive revelation, is a brutal and aggressive scene which leaves Edie bruised and in tears. She doesn’t know who her husband is anymore.

Viggo Mortensen is better than he’s ever been in the lead role. His low-key performance hits all the right notes as Tom desperately tries to maintain control of his identity, and his family. Mortensen’s open features lend a note of ambiguity to every scene, notably the haunting final shot, and he makes the often huge shifts in Tom’s character believable. Maria Bello lends a real emotional weight to the film with her display, making Edie a complex and fascinating presence, while newcomer Ashton Holmes is impressive in a difficult role. As two of the shady characters who intrude on Tom’s life, Ed Harris and William Hurt give wonderfully ripe performances which are both witty and chilling.

Cronenberg’s direction is faultless, his control of tone and mood is effortless and his deliberate pacing draws us into the story until we are fully enveloped in its clutches. It’s another masterful film from a master filmmaker who has never really received the recognition he has deserved, and those who blanched at the thought of Cronenberg doing an Hollywood action film can rest easy. With A History of Violence he has created a film as incisive, intelligent and provocative as you would expect from him; a film which gives the public what they want then chastises them for liking it. In the devastating, wordless final sequence we fully comprehend the effect that the film’s events have had on this family. They are different people now, their relationship changed forever by what they have seen and done, and things will never be the same again. That’s what violence does to people, It’s not like the movies.