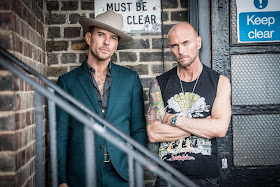 “I think the letters H-O-M-E are very important,” Matt Goss explains, “because they personify the word home.” Matt is showing us around his American abode (complete with energy crystals, his ‘conversation corner’, and a painting of his beloved bulldog holding a beer), but his thoughts keep drifting back the city he grew up in. “I’m a London boy. Big Ben. Embankment. Cab Drivers.” He’s about to return to London for a reunion with his brother Luke – with whom he formed the pop sensation Bros in the late 1980s – for a series of reunion concerts, and After the Screaming Stops follows a fractious few weeks before they appear together at the O2 for the first time in almost thirty years. Co-directors Joe Pearlman and David Soutar mine plenty of awkward comedy from the brothers’ idiosyncrasies and primarily from Matt’s overreaching metaphors and cod-philosophical statements (“I made a conscious decision, because of Stevie Wonder, to not be superstitious.”), but there’s also real pathos here. Both men come close to cracking under the pressure of trying to recapture something they had three decades earlier, and simmering, long-buried resentments (Luke feeling overshadowed by his brother, Matt feeling like he’s not being take seriously) keep bubbling to the surface. The filmmakers skilfully craft the film towards a cathartic, triumphant climax at the O2, although there’s an undeniable suspicion that intriguing and complicated parts of the story have been cleaved off in order to facilitate this narrative trajectory; for example, the London gig is presented as a one-off show, when in fact a number of UK dates were announced before being abruptly cancelled. Still, the film packs a lot of laughs and some surprisingly poignant insights into its 98-minute running time, and as Matt so sagely puts it, “Rome wasn’t built in a day. Fuck me, that’s true…but we don’t have the time that Rome had.”

After the Screaming Stops currently has no UK distribution. 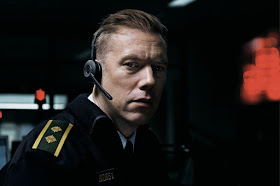 A few years ago at the London Film Festival, one of the major highlights was Caroline Bartleet's short film Operator. This six-minute drama starred Kate Dickie as an emergency services phone operator who receives a 999 call from a woman trapped in a burning building. All we had was Dickie on screen and the frantic sounds on the other end of the line, but with these elements in place, Bartleet generated a heart-stopping tension. (It was certainly superior to the mawkish The Phone Call, which won an Oscar in the same year.) Gustav Möller's The Guilty proceeds in a similar fashion – the camera never leaving the call centre – and at times it churns up a comparably clammy atmosphere of anxiety and dread. Asger Holm (Jakob Cedergren) is a cop demoted to the emergency services night shift while a disciplinary investigation takes place. He picks up a call from a woman who has been kidnapped and immediately sets about solving the case, but there's an interesting twist here. In Operator, the drama revolved around the protagonist's ability to remain unflappable and professional in a crisis, whereas Asger quickly proves he is no stickler for the rules. He begins ignoring protocols and launches his own attempts to bring the kidnapper to justice, possibly doing more harm than good in the process. With the film being confined to this one drab location, we are forced to share Asger's frustration, receiving only fragments of the narrative and waiting on offscreen voices to fill in the gaps. This is very much a debut feature, with Möller setting himself achievable parameters and hitting the marks he needs to hit. To his credit, he doesn't strain too hard to juice the film up visually with extravagant angles and cuts; he trusts that his leading man and his intriguing narrative will be enough to hold viewers rapt, and for the most part, he's right. Cedergren gives a commanding performance, as Asger's arrogance bleeds into doubt and desperation with every new revelation, but it's those revelations that cause the film to stumble slightly. In an attempt to stretch this plot to feature length, Möller and his co-screenwriter Emil Nygaard Albertsen pile on the twists in the film's third act, with some being clumsily handled and straining credibility. Less is often more in the world of the single-location thriller, but a few missteps aside, this is an impressively slick, tight and gripping effort. 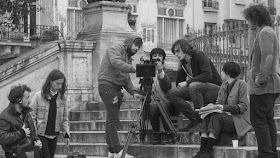 I guess I'm predisposed to like a black-and-white film about a pretentious cinephile in Paris, falling in and out of love with a series of gorgeous French women, but even when I started the screening so firmly in its corner, Jean-Paul Civeyrac's A Paris Education tried my patience. Étienne (Andranic Manet) is the aspiring film director who has left behind his provincial home (and his long-term girlfriend) to begin his life as a film student in the French capital. He has ambitions and ideals but not yet much life experience or a clearly defined voice, and A Paris Education is partly about the need to look outside oneself and open up to new people and new experiences. Étienne gets called out for his solipsism and navel-gazing more than once, which can make him a frustrating protagonist to spend time with. I saw shades of Jean Eustache's The Mother and the Whore in this film, but Manet has none of Jean-Pierre Léaud's vitality or dexterity. It's left to the supporting actors to breathe life into the movie, which they frequently do. Some of the best scenes in the film focus on his friendly and flirtatious relationships with two roommates – Valentina (Jenna Thiam) and Annabelle (Sophie Verbeeck) – while the most intriguing character in the whole movie is Mathias (Corentin Fila), who everyone in the film seems to be obsessed with. It's easy to see why; Fila is a confident, charismatic performer and his character – who remains shrouded in mystery – seems to bring the narrative into focus whenever he appears. The rest of the time, A Paris Education meanders through monotonous scenes of Étienne sulking, brief romantic trysts, and characters arguing about the merits of contemporary cinema. “I’ve had enough of whiny French films,” one student complains, and I wondered if Civeyrac was attempting some kind of autocritique.  Also wondered what these students, who rhapsodise about the works of Vigo and Ford, would make of A Paris Education's images. It shouldn't be hard to make a beautiful black-and-white film in Paris, but Pierre-Hubert Martin's digital cinematography is shockingly drab, casting everything in a washed-out hue, and Civeyrac does little of interest with his framing. It's one of the drabbest-looking films I've seen in some time.