The Philosophy of Erich von Stroheim 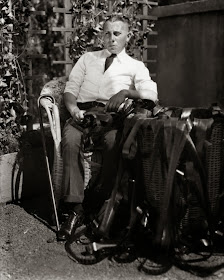 "I had graduated from the D.W Griffith school of film making and intended to go the Master one better as regards film realism. In real cities, not corners of them designed by Cedric Gibbons or Richard Days, but in real tree-bordered boulevards, with real street-cars, buses and automobiles, through real winding alleys, with real dirt and foulness, in the gutters as well as in real castles and palaces. I was going to people my scenes with real men, women and children, as we meet them every day in real life, in bad as well as in good taste, clean and dirty, faultless and ragged, but without exaggeration, without modification, and without the then currently popular concessions to the conventions of the stage and screen. I was going to film stories which would be believable, life-like, even if I had to make them realistic to the Nth degree. I intended to show men and women as they are all over the world, none of them perfect, with their good and bad qualities, their noble and idealistic sides and their jealous, vicious, mean and greedy sides. I was not going to compromise.

I felt that after the last war, the motion picture going public had tired of the cinematographic 'chocolate eclairs' which had been stuffed down their throats, and which had in a large degree figuratively ruined their stomachs with this overdose of saccharine in pictures. Now, I felt, they were ready for a large bowl of plebeian but honest 'corned beef and cabbage'. I felt that they had become weary of insipid Pollyanna stories with their peroxide-blonde, doll-like heroines, steeped in eternal virginity, and their hairless flat-chested sterile heroes, who were as lily-white as the heroines. I thought they could no longer bear to see the stock villains, dyed-in-the-wool, 100 per cent black, armed with a moustache, mortgage and riding crop.

I believed audiences were ready to witness real drama and real tragedy, as it happens every day in every land; real love and real hatred of real men and women who were proud of their passions. I felt that the time was ripe to present screen stories about men and women who defied with written and unwritten codes, and who took the consequences of their defiance gallantly, like many people do in real life. People who defied prejudice and jealousies, conventions and the social mores of a hypocritical society, who fought for their passions, conquered them or were conquered by them.

I knew that everything could be done with film, the only medium with which one could reproduce life as it really was. I knew also that an entertainment that mirrored life would be more entertaining than one which distorted it. The sky was the limit! Whatever a man could dream of, I could and would reproduce it in my films. I was going to metamorphose those 'movies' into art – a composite of all arts. Fight for it! And die for it, if need be!

Originally an extract from an unpublished article by Erich von Stroheim, this was later reproduced in the published Greed shooting script in 1972.
Philip Concannon
Share
‹
›
Home
View web version