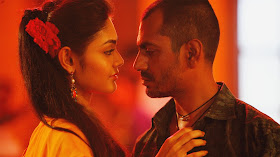 Perhaps Amit Kumar's film should have been called Monsoon Standoff. When naïve young cop Adi (Vijay Varma) corners his suspect in an alleyway, the film slows down to a standstill, and from this tense confrontation, the narrative branches off in three directions. Adi has Shiva (Nawazuddin Siddiqui) in his sights and staring down the barrel of his gun, but he hesitates for a crucial moment as his mind races through the possible outcomes of his actions. Kumar's screenplay allows us to see what happens if Adi lets Shiva escape, if he kills him, or if he takes him into custody, and while this Sliding Doors-style approach is undeniably schematic and gimmicky, the director uses it to find moral complexity in his story. No matter what course of action Adi takes, somebody ends up getting hurt, as the ripple effect from the battle between cop and criminal impacts upon each character's friends and relatives in unexpected ways. Monsoon Shootout was in development for the best part of 10 years, with Kumar claiming that the convoluted nature of his narrative structure was the main reason behind that long gestation period. Bearing that in mind, presence of apparent character and storytelling inconsistencies that one would expect to be ironed out in revisions is baffling, but they don't get in the way of the film's powerful dramatic pull. Kumar's direction is slick and propulsive, and he rattles through his three stories in under 90 minutes, although perhaps a bit of breathing space could have afforded more time to Adi's love interest Anu (Geetanjali Thapa), who is something of an afterthought. As the lead, Varma is solid but unmemorable, failing to invest his standard-issue "idealistic rookie in a corrupt unit" character with much colour, but there are great performances to be found elsewhere in the picture. Neeraj Kabi and R. Balasubramanian are compellingly duplicitous presences as Adi's no-nonsense boss and the local slumlord respectively, but the film is comprehensively stolen by Nawazuddin Siddiqui, whose vivid inhabitation of the hatchet-wielding psychopath Shiva has a vivid, explosive quality that energises the whole film. Monsoon Shootout is handsomely crafted, with some great location work, and Rajeev Ravi's cinematography is superb, particularly in the beautifully lit night scenes, when he makes a virtue of the torrential rain. 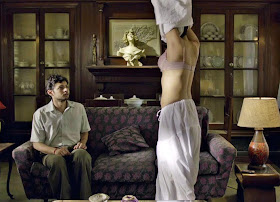 The entry for B.A. Pass in the festival brochure draws comparisons with The Graduate, and it's easy to see why, but Ajay Bahl's film takes the older woman/young man dynamic down a much less comedic road. Mukesh (Shadab Kamal) is a student forced to live with relatives after the death of his parents, which brings him into contact with Sarika (Shilpa Shukla), a friend of his aunt's whose husband is also his uncle's superior. When Sarika invites Mukesh over to run some errands, his aunt and uncle are only too happy to be of service, but no sooner has he entered her home than she's taking advantage of the startled youth. Bahl wastes little time in setting the wheels of his plot in motion. Soon Sarika is educating her young companion in the ways of lovemaking and then – after he has been sufficiently trained – she starts pimping him out to her friends, all of whom are happy to pay for his talents. B.A. Pass is one of the most chaste sex-driven films you'll ever see – all such encounters keep breasts covered and lower regions carefully blocked – but Shukla's sultry, commanding presence is enough to infuse the film with an erotic charge all by itself. The film is never quite as gripping when she's off screen, although one scene in which Mukesh is hired to comfort a lonely widow is quite touching. Bahl clearly wants to make a film noir and all the elements are there – the femme fatale, the evocative score, the inevitable corruption of the protagonist. The film could have used some more of the visual ingenuity that Bahl displays in the climactic scenes, when the neon lighting gives it a nightmarish quality, but Bahl's direction is generally smart and confident, and  he has produced a classy adaptation of Mohan Sikka's The Railway Aunty (which you can read here). 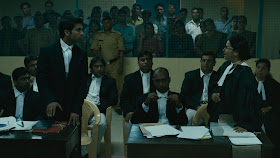 The true story of Shahid Azmi is an extraordinary one. As a young man, he and his family suffered violent persecution at the hands of Hindu mobs, and he reacted by enlisting in a militant training camp in Pakistan. After having a change of heart, he escaped the camp and returned to Delhi,  where he was arrested on anti-terrorism charges and thrown into jail. This was the start of his life's unexpected second act, as he used his time behind bars to study the law, qualifying as a lawyer and dedicating himself to defending poor people whom he believed to be wrongly accused of terrorism. In 2010, he was working on behalf of Faheem Ansari – accused of involvement in the 2008 Mumbai attacks – when he was gunned down in his office, which is the incident that opens Hansal Mehta's film. With Raj Kumar Yadav giving a very convincing performance in the title role, Mehta takes a sober and stately approach to Shahid's tale, although some of the superfluous material that does little more than swell the picture's running time could have easily been lost. Shahid does show admirable attention to detail, most notably in how much it depicts of its lead character's court cases, which are given a substantial amount of screen time. At times, these courtroom exchanges threaten to bog the film down, but the conviction of the cast and the sense of authenticity that Mehta brings to them ensure that they are mostly very effective. Shahid is a stirring and often very moving film about the importance of standing up for what you believe in, even if it means you might have to pay the ultimate price. 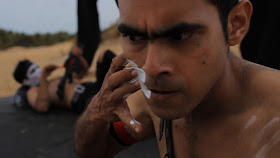 I've now seen two films by Qaushiq Mukherjee – who prefers to be credited as Q – and I still have no idea what to make of him. I found his last film Gandu to be energetic but ultimately exhausting, and while Tasher Desh is nowhere near as aggressively confrontational as its predecessor, it does confirm that Q is more a creator of images than much of a storyteller. An adaptation of Rabindranath Tagore's play, Tasher Desh something to do with a group of noble characters living in a crumbling palace whose conversation revolves around their desire to fly, and their tale is intercut with shots of a man wandering through a train station talking to himself. The film's title card appears 45 minutes into the movie, and it seems to indicate a shift in focus, with something resembling a coherent story beginning to unfold in the film's second half. Now in striking colour, Tasher Desh becomes the story of a mysterious island populated by inhabitants named after playing cards. These people entirely lack human emotions, a state which is challenged by the arrival of characters from the first half of the film, whose expressions of desire and freedom sow the seeds of a revolution. That's about all I can tell you, because narrative coherence is not exactly Tasher Desh's strongest suit. Most of the time it resembles a series of music videos loosely stitched together, but there's something invigorating about Q's extravagant visual sense, which recalls directors like Ken Russell and Tony Scott. His editing tricks can be aggravating, but his sense of colour is frequently dazzling and the film possesses enough gorgeous imagery to make up for its shortfalls in content – even the film's subtitles are beautifully crafted. I don't know how readily I can recommend Tasher Desh or not, but I certainly liked it a lot more than Gandu, and I'll keep an eye out for whatever it is that Q is planning on unleashing next.