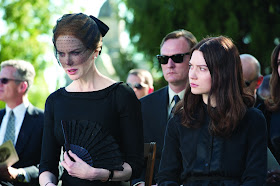 Extravagant pieces of filmmaking often get accused of favouring style over substance, but in a film like Stoker the style is the only substantial thing about it. Stoker is based on a screenplay by actor Wentworth Miller, which appeared on the 2010 "Black List" of the best unproduced screenplays in Hollywood, but in the finished product his script hardly appears to be the film's strongest suit. The film is largely a riff on Alfred Hitchcock's Shadow of a Doubt, dressed up with all manner of gothic, Freudian and fairytale imagery, but these elements never come together into a satisfying whole. Instead, Stoker is distinguished by Park Chan-wook's direction, which almost singlehandedly elevates it from something worthy of dismissal to something worth paying attention to.

Park Chan-wook is the Korean director whose reputation has been built largely on his Vengeance trilogy, where the stylistic verve of Park's approach increased in accordance with the deepening darkness of his twisted tales. Any fears that Park's distinct signature would be diluted when he made the move to America are quickly allayed in Stoker, which establishes an unsettling, off-kilter tone from the start. The heightened colours and sound design seem to reflect the assertion made by India (Mia Wasikowska) that she can "see and hear what others cannot" and creates a sense of vague unease. We first meet India as she runs through the grounds of her home, searching for the birthday present left by her father, but this day – her 18th birthday – coincides with her father's death in a terrible car accident.

India is morose, introspective and troubled; a difficult teen who recalls such forbearers as Wednesday Addams or Heathers' Veronica. After her father's death, she is left with her mother Evelyn, who is played by Nicole Kidman. Kidman is so good in the brief flashes when she is given something to work with here – in particular, she delivers a heart-stopping monologue to her daughter late in the film – I couldn't help lamenting the fact that everyone seems to forget about her for much of the movie. The focus instead falls on India's relationship with her mysterious uncle Charlie (Matthew Goode), whom she didn't even know existed until her turned up at the funeral and began charming his late brother's widow.

Matthew Goode has the kind of slick, affable charm that instantly reveals him to be a psychopath, and sure enough, it isn't long before people start disappearing. India's growing fascination with him seems to unlock something disturbing deep inside herself, and Park does frequently generate a queasy tension and simmering dread in the film's opening half hour. As the three family members sit down at the dinner table, the manner in which his camera moves around them suggests a constantly shifting dynamic, and this is where Stoker is at its most potent, when Park skilfully exploits Goode's piercing eyes, Wasikowska's sullen depth or Kidman's nervous energy. The director is superb at finding these isolated moments in which the image, sound and performance create a mood that is uniquely the film's own. He achieves it again later on in the film when Charlie and Mia sit together at the piano and play a piece (written by Philip Glass, although the film's composer is Clint Mansell) in an encounter that is charged with an erotic energy.

On a scene-by-scene basis, Stoker is as good as anything else out there, but I must specify that statement really does only apply to the film on a scene-by-scene basis. The film never finds a clear rhythm, it never flows naturally from one scene into another, no matter how artfully Park and his editor Nicolas De Toth cut between them. It's as if Park attacked each moment in the script on an individual basis and decided on the best way to exploit it on screen without giving a great deal of thought to how all of these pieces would fit together. There's something very admirable about seeing a filmmaker go for broke in such a fashion, but Stoker's unending stream of dazzling directorial coups eventually becomes exhausting. I started to look for something underneath the bracing surface, and found nothing. There's no emotional weight, no context for these characters' behaviour and no fresh take on some age-old ideas. It all feels frustratingly empty.

When what's happening in the story is so tritely obvious (although the climactic revelations from Charlie's past are horribly muddled), the question of what Stoker is actually about becomes more pertinent, and it's a difficult question to answer. The film feels so empty of real content and having enjoyed its aesthetic pleasures on one viewing I'm finding it hard to imagine returning to the film in the future. But there is pleasure to be had in its images, its sounds and its compositions – that much is undeniable – and finding a film that impresses so much on those levels is rare enough to make this one worth recommending. Sometimes you want a film in which every element fits, but sometimes it's sufficient to see a talented director take a middling script and simply direct the hell out of it.