The Seret London Israeli Film Festival takes place at venues across London from June 9th - 16th. The programme features 25 films, documentaries and TV series from both established and emerging Israeli talent, and the lineup is eclectic enough to ensure there will be something for all tastes. Here's my take on four of the films on offer on this year's festival. 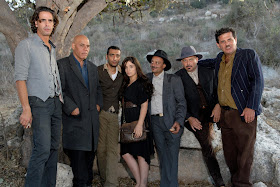 The Ballad of the Weeping Spring is an unashamedly old-fashioned and straightforward crowd-pleaser, and on that basis it must be regarded as a success. There's no doubt where the film is heading, and you can almost visualise the emotionally charged finale as soon as the plot has been set in motion, but Benny Toraty is smart enough to invest the narrative with plenty of offbeat character touches and incidents. Essentially a "Let's get the band back together" romp, The Ballad of the Weeping Spring consciously nods to The Magnificent Seven as it follows the crotchety Tawila (Uri Gavriel) who is attempting to recruit musicians to perform for a former bandmate before he passes away. The film proceeds as a series of amusing vignettes, with Tawila and his gradually enlarging posse travelling from town to town en route to his ailing friend, and picking up new members for the group, often after engaging in some kind of amusing confrontation. The fact that one of these confrontations involves a jilted bride wielding a machete as she waits for her cowardly husband to come out and face the music indicates the film's tone – the humour and performances are often on the broad side. What keeps the film anchored is Gavriel's tough central turn – he has a Tommy Lee Jones-style gravitas – and the fact that Toraty shows a nimble hand in the way he balances the film's comedy with its more emotional scenes, without letting the film grow overly sentimental. Other pleasures are provided by the striking location work and frequent bursts of traditional Israeli music. It's an entertaining and ultimately satisfying package, and even if you know exactly where the film is going to end up, you don't begrudge the time you've spent getting there. 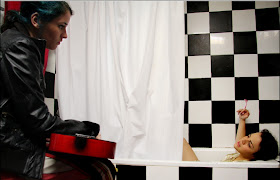 Joe + Belle is a tale of lovers on the run, but when that story has been told and re-told so many times through cinema's history, any take on the concept has to work twice as hard to rise above the dull sense of familiarity. Sadly, little about Veronica Kedar's feature debut feels fresh. The film opens with the quote "When love is not madness, it is not love," but Kedar's tactic for generating that sense of madness consists of throwing disparate elements into the mix and moving at a pace that doesn't allow them to settle. As a result, her film is a baffling collection of contrivances and inconsistencies that barely rings true for a moment. The writer/director herself stars as Joe, and we first meet her as she arrives back in Israel from Bangkok with a bagful of drugs, and we first meet Belle (Sivan Levy) when she emerges from a psychiatric hospital. Their "meet cute" occurs when Belle inexplicably decides to break into Joe's bathroom to commit suicide, and soon a mix-up involving Joe's ex-boyfriend results in a dead body on the floor. The manner in which the two girls attempt to dispose of this corpse creates one of the few scenes in the film that has rich comic potential, but Kedar has lamentable timing in this regard and that potential is frittered away. What's most bizarre about Joe + Belle is the lack of urgency the characters display as they hit the road to escape the law; we never feel the gravity of their crime or their fear of facing the consequences. The lack of humour, tension or social context (aside from mentions of Qassam rocket frequently being overheard on nearby radios) renders Joe + Belle a quite useless thing, and the romance that suddenly blossoms between the pair is laughably unconvincing, particularly after Joe's "Yuck" response when she first hears of Belle's lesbianism. Joe + Belle is full of shortcuts and easy choices, and it never ventures into the complexities that characters and a plot of this nature should throw up. 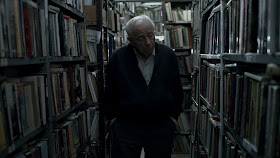 One of the most acclaimed and talked-about films of 2012 was Michael Haneke's Amour, and it was perhaps inevitable that any other film exploring similar subject matter in the same year would be neglected. This appears to have been the case with Epilogue, but Amir Manor's beautifully observed and extremely moving drama deserves to be rediscovered. The film takes place over a single day, beginning in the morning when elderly couple Berl (Yosef Carmon) and Hayuta (Rivka Gur) are disturbed by a social worker who subjects them to a humiliating session of questions and physical trials. This is the first instance of the central characters being baffled and affronted by the modern world that exists outside their apartment, but it won't be the last, and the sight of this poverty-stricken couple attempting to maintain a sense of dignity in the face of their troubles is very affecting. Manor follows both characters as they go their separate ways throughout the day and run some errands, but their shared experience is the same, frustration and disillusionment at the way they are treated by younger generations across the city. "We're irrelevant," a weary Hayuta tells her husband later that night, and the director frequently frames his characters behind glass or through openings to suggest two people cut off from the rest of society. Epilogue has flashes of humour that help leaven the bleak tone, and there are moments of individual kindness that carry a considerable emotional impact. Above all else, it is a wonderful showcase for two veteran actors, whose wonderful onscreen chemistry suggests a whole life lived together, and a love that still burns bright. 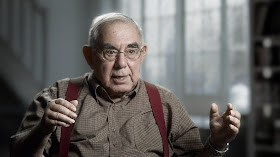 The Shin Bet is Israel's interior security service and until The Gatekeepers was made the six surviving former heads of this service had never been interviewed. So Dror Moreh has pulled off quite a coup by persuading them to open up for his cameras, and he has made the most of the opportunity by crafting their recollections into a gripping and eye-opening documentary.  The tale they tell is of a country in a constant state of war, and they explain in sober, illuminating detail what it takes to maintain the security of the state under such circumstances. These are hard men who are resolute in their convictions, and they don't flinch under Moreh's questions, but sometimes we see glimmers of a troubled humanity. Yuval Diskin describes being perturbed by an "unnatural" feeling even after achieving a terrorist kill that is as clean as possible, with no collateral damage, and this sense of moral ambiguity proves to be the film's most fascinating theme. Avraham Shalom dismisses any ideas of morality factoring into the war on terror, suggesting that one should regard the lack of morals in terrorists before worrying about the validity of torture. Ultimately, all six of the interviewees show their desire for a political agreement and lasting peace – "We wanted more security, we got more terror," one states – but they are pessimistic about the future and firm in their conviction that anything and everything must be done to protect Israel while the threat persists. The Gatekeepers is a fascinating study of men for whom warfare is a constant factor, and life-or-death decisions are a daily task. Moreh's beautifully edited film allows these intelligent, eloquent and formidable men to share that experience with us, and the result is a truly extraordinary documentary that lingers in the memory.
Philip Concannon
Share
‹
›
Home
View web version