Review - Sleepwalk With Me 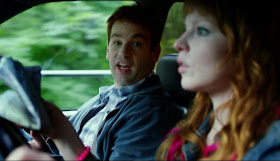 At the start of Sleepwalk With Me, Mike Birbiglia turns to the camera and insists that the story we are about to see is true. He also reminds the audience to turn off their mobile phones, before he recalls being in a cinema when a fellow audience member answered his phone with "Who dis?" – "Not only was he willing to talk to someone on the phone, he was willing to talk to anyone on the phone!" a perplexed Birbiglia exclaims. This opening quickly establishes the style that will carry Birbiglia through his debut feature; the stand-up comic's wry observations on everyday absurdities, the frequent reiteration that all of this really happened, and the direct address to the viewer, which allows him to take us into his confidence and ask for our support. "It's important before I tell you this portion of the story to remind you that you're on my side," he tells us before an episode that potrays him in a particularly unflattering light.

Birbiglia's ability to keep us onside even as his behaviour occasionally appalls us is one of the key factors in Sleepwalk With Me's success. He has given the leading character in the film the name Matt Pandamiglio, but the events his film depicts are drawn from those covered in Birbiglia's confessional one-man show. Matt is an aspiring stand-up comedian whose aspirations haven't been dimmed by the lack of success he has had with his few performances to date. His girlfriend Abby (Lauren Ambrose) is supportive of his ambitions, but she wants something more from their long and now stagnating relationship. Abby has started talk of marriage and kids, something which sends Matt into paroxysms of anxiety, and that anxiety manifests itself as a series of incredibly vivid dreams and sleepwalking episodes.

One of the more persistent and troubling archetypes in recent American comedy is the selfish, commitment-phobic schlub who nonetheless manages to sustain a relationship with a woman who clearly deserves much better. When the star of the film is the director or creative force of the picture, this disparity between partners can come off looking like narcissism or wish-fulfilment, and some viewers will surely note that Matt doesn't deserve a woman as virtuous and lovely as Abby, even before his behaviour seals the deal. Much of the film is based around his unkindness and deception. When he finally gets the opportunity to take his act on the road, driving hundreds of miles for low-rent gigs, his first spark of success comes after he introduces his marriage woes into his routine with the line, "I don't want to get married until I'm sure nothing else good can happen in my life." Matt makes his relationship with Abby the central thread of his act, hiding this fact from her while she waits at home, proud of his promising progress reports from the road.

Birbiglia gets away with it partly through his own affable charm, and partly because his film feels so well-observed and sincere. Both the portrait of a young comedian's struggles and the scenes of awkward domesticity feel authentically depicted, and the fantasy interludes drawn from Birbiglia's nightmares ensure the film feels more accomplished cinematically than a stand-up's adaptation of his own routine might otherwise have been. In many respects, the tone and content of the film recalls Annie Hall, though there's a rough-and-ready quality to Birbiglia's filmmaking that leaves it falling short of Allen's great relationship comedy. There is plenty of promise evident in Sleepwalk With Me, though, and Birbiglia has already stated his intention to adapt his latest autobiographical comedy routine for the screen too. In Sleepwalk With Me he manages to play himself as the bad guy and still earn our sympathy; whether he'll be able to pull off the same trick twice is an open question.
Philip Concannon
Share
‹
›
Home
View web version