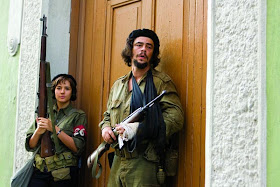 The Che I saw, and the film I'm going to write about here, is not the Che that most people will experience. My review is based upon the viewing of the whole 4+ hours in one sitting, with a 15-minute interval between segments, while the picture has been divided into two parts for mass consumption, with the first being released in the UK in early January, and the follow-up arriving in February. Part One details the Cuban revolution, while the second instalment focuses on the failed attempt to repeat that feat in Bolivia, and perhaps that's the best way to experience Steven Soderbergh's epic account of Che Guevara's rise and fall, because as a single cinematic experience I found it all a bit indigestible. I wonder, though, if I would still have the same doubts about the whole enterprise even if I had watched them separately, as there appear to be some fundamental flaws in the way Soderbergh has brought this story to the screen.

It's a strange thing, to watch a film and admire almost every decision the filmmakers have made, while simultaneously finding very little to really care about in what I was seeing. Soderbergh has admitted he wanted to avoid any "biopic moments" in his telling of the Che story, but he fails to give us anything in place of those moments, and at times he seems perversely determined to prevent any kind of audience engagement with the story. His direction is detached and objective as he maintains a consistently muted tone throughout, using Che as an examination of the process of revolution, and the nuts and bolts of guerrilla warfare, but he seems oddly uninterested in the man at the centre of these two films. Soderbergh and his screenwriters Peter Buchman and Benjamin A. van der Veen have adapted their screenplays from Guevara's own diaries, but while the resulting films never feel anything less than utterly authentic, the coldly clinical nature of them fails to sustain the mammoth running time.

Of course, that might not be such an issue for the majority of viewers, who will be viewing Che as separate two-hour pictures, but I think the first half feels like the most satisfying and complete of the pair. The film introduces us to the young Argentine doctor Ernesto Guevara (Benicio Del Toro) in 1956, when he first encountered Fidel Castro (a fine impersonation from Demián Bichir), and then the pair take a boat to Cuba, where they will begin their rebellion against the Batista regime. The ensuing scenes are fascinating to watch, as Che slowly begins to build an army in the hills, delivering rousing speeches, and training and educating the men around him into real soldiers. Che's narrative doesn't exactly flow in a smooth manner, but Soderbergh's nimble editing ensures the progression of events still hangs together, while his cross-cutting between Che's 1964 appearance in New York acts as a kind of narration. We see how Che insisted that his men be disciplined and literate, and we see how he won the hearts and minds of the villagers he encountered, and the film builds steadily to the Battle of Santa Clara in 1959; a battle which effectively toppled the Batista government, and which is presented here as a thrillingly immediate, brilliantly sustained set-piece.

Che: Part Two is a very different film. From the start, Soderbergh highlights the difference by downsizing the aspect ratio to 1.85 and employing a jumpier handheld style, while the digital cinematography – so vivid and lush in the first film – is more washed-out. If the first segment was about the success of Che's ideology in Cuba, then the second is about him failing to impose that same ideology on the Bolivian people, and as such the film becomes a slow study of failure, which lacks the variety or tonal shifts that kept the first instalment interesting. Again, one should bear in mind that I was about three hours into my Che experience at this point, but halfway through the increasingly turgid second film my attention began to waver. For all of the conviction and authenticity of these movies, the lack of a real emotional centre begins to tell the longer they go on.

That's why I think Soderbergh's dismissal of "biopic moments" is misguided. In the hands of a skilled filmmaker – which he undoubtedly is – those moments can be a useful shorthand to help draw the viewer into the life of the man whose story is being told. Soderbergh doesn't do himself any favours by skipping over the most controversial part of Che's life – the years when he was in power – which opens him up to accusations of making a hagiography, but while Che isn't quite a hagiography, it never develops into more than a one-dimensional portrait of the men either. The tragedy is that Benicio Del Toro is perfect for the role; a commanding presence who holds our attention through his understated intensity, it's so easy to believe in him as a leader of men. Occasionally we get peeks inside Che – his vulnerability is suddenly exposed when he is felled by an asthmatic attack in the second picture – but for the most part this figure exists totally on the surface. After watching Che, I came out of the film knowing a lot more about the details of the Cuban revolution and its ill-advised Bolivian counterpart, but the film taught me next to nothing about the man behind them. Perhaps that was exactly what Soderbergh was going for, and in that case these two films can be considered an unusual success, but it's hard to avoid the conclusion that some kind of opportunity has been thrown away here.
Philip Concannon
Share
‹
›
Home
View web version