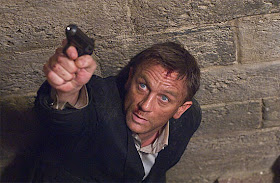 Quantum of Solace is the new James Bond film, or is it? For much of its truncated running time the film feels more like the latest instalment in the Jason Bourne franchise, with many of the tropes that made Bond the character he is having been coolly stripped away from this hard-edged picture. This transformation began in Casino Royale, with Daniel Craig being introduced as a tougher, more complex Bond than his predecessors, but it is taken a step further in Marc Forster's film, which jettisons the quips, love scenes and catchphrases altogether to focus on non-stop action. Is this a bad thing? Not necessarily, as the action scenes in Quantum of Solace do occasionally get the pulse racing, but it does make one wonder where this series of films is going. Have the Bourne movies so revolutionised the mechanics of action filmmaking that cinema's longest running franchise feels the need to completely overhaul its own identity to keep up the pace?

Another alteration made to the series for this film is the fact that it acts as a direct sequel to the last picture, picking up mere moments after the credits rolled on Casino Royale. When we last saw Bond, he was heartbroken by both the betrayal and death of his lover Vesper Lynd (Eva Green), and he was determined to avenge her by finding the man she was working for. To that end, we now find him speeding through the tight streets of Siena, with Mr White (Jesper Christensen) bound and gagged in his boot, and trying to shake off a few gun-toting pursuers before he and M (Judi Dench) can interrogate him. That's the brief, hectically edited opening sequence in a nutshell, and after the unimpressive credits (complete with another dull song), we can settle down into the story itself, although the film won't give us a minute to rest. M has barely had a chance to question White before Bond is off again, clambering over rooftops and swinging from the rafters in pursuit of a gunman. Once that skirmish is over, he darts off to Haiti where he encounters the villain of the piece, Dominic Greene, who is played by Mathieu Amalric (great!), but who has been handed a bit of a dull part (shame).

Quantum of Solace is a bit like that all the way through – Bond turns up in a variety of exotic locations (add Austria, Bolivia, Russia and London to those listed above), gets involved in a fight or chase, and then there's just a few minutes left to cram in some plot details before the film moves on. It's relentless, in other words, and it becomes a little wearing, although Forster's handling of the large action element improves throughout the film after a poor start in which he shreds rather than edits, creating confusion where there should be excitement. Forster is an odd choice to take the reins on this movie. Having carved out a niche for himself as a maker of decent, middlebrow entertainments, he would presumably be better suited to the kind of character-driven interludes that occur between explosions, but the screenplay – again by Paul Haggis, Neal Purvis and Robert Wade – is light on such moments, so he is given little opportunity to stamp any personality on his direction. Quantum of Solace is competently directed and handsomely – occasionally spectacularly – filmed, but that's about par for the course on a major production like this.

What Quantum of Solace needs, and fortunately possesses, is a solid centre, which is provided by Daniel Craig's confident embodiment of Bond. Having grown into the role in Casino Royale, Craig seems completely at home in the part now, and he does well to suggest levels of depth and feeling in a character who, as written, is little more than a brutal, unstoppable killing machine. It's a commanding, introspective piece of acting, although Craig would be capable of giving more if it were asked of him. The film is littered with good actors who are adept at doing a lot with little (Judi Dench, Jeffrey Wright and Giancarlo Giannini fall into this category), and the main female cast members meet with mixed results. Olga Kurylenko is a big plus as a tough, engaging Bond girl with her own agenda, who convincingly helps OO7 fight his way through film's latter half; but Gemma Arterton is given practically nothing to do (introduce yourself, have sex with Bond, then disappear), and her credibility as an MI6 agent isn't helped by the fact that she's called – I'm not kidding – Strawberry Fields.

The film flirts with an intriguing subtext about the British and American government being complicit with dictatorships for their own end, but there's no time to explore such avenues when the film is spinning from explosion to explosion at such a rate. Quantum of Solace is OK for what it is. The final set-piece is the film's best: a shootout in a bizarrely designed desert hotel that – you've guessed it – is falling apart around the characters' ears, and it's efficiently entertaining stuff, but the film as a whole is lacking in the kind of advancement that was promised by Casino Royale. One is left to ponder where Bond stands in this new post-Bourne world – many of the sequences here are so similar to scenes already played out in The Bourne Supremacy and Ultimatum, it's impossible to ignore the influence – but while the extra grittiness and realism is welcome, it shouldn't come at the expense of the series' hallmarks. We can appreciate that Bond needed to move away from the camp silliness of the Moore era, or the bloated emptiness of films like Die Another Day, but in reinventing the franchise from the ground up, shouldn't they remember that certain elements – the wit, the style, the gadgets, the catchphrases – were what drew many fans to this character in the first place? Can they maintain the essential ingredients while delivering a plausible action hero for the 21st century? These are thorny questions, and there are no easy answers, but we'll find out where Bond is going from here soon enough. As the final credits promise, James Bond will return.
Philip Concannon
Share
‹
›
Home
View web version