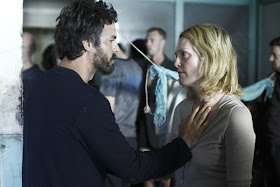 My eyes! My eyes! It's all too easy to make jokes about Fernando Meirelles' Blindness being an eyesore, but unfortunately such a term is the most appropriate way to describe his inexplicably dismal new feature. This adaptation of José Saramago's highly acclaimed 1995 novel tries to find a suitably cinematic method to depict the sudden outbreak of sightlessness that spreads like wildfire through a nameless city, but whereas something like The Diving Bell and the Butterfly found a perfect visual scheme to place us in its central character's situation, Blindness overdoses on similar techniques until the movie becomes nigh-on unwatchable. The first character to go blind in the film is a Japanese gentleman (Yusuke Iseya) who suddenly loses his sight while sitting at a set of traffic lights. He describes the experience as "like swimming through milk", and Meirelles chooses to visualise this for us by flooding the screen with light, until we too can only make out the most indistinct shapes and blurry outlines in a sea of white.

Such camera trickery is not necessarily a bad idea in and of itself, but Meirelles and his cinematographer César Charlone return to the same gimmick again and again, repeatedly giving us confusing point-of-view shots and even marking scene transitions with a glaring whiteout. The approach extends to the production design as well, which is almost exclusively painted in shades of white and grey, and even Julianne Moore – one of cinema's most vibrant redheads – looks like she has been dipped in bleach before the cameras started to roll. She plays a woman married to the Ophthalmologist (Mark Ruffalo) who treats the Japanese man at the start of the film, and who is baffled by the apparent lack of symptoms he displays. When he wakes up in the morning, the doctor can't see either, and he warns his wife to stay away from him for fear of catching what is clearly a highly contagious disease. Bizarrely, she seems to be immune to the outbreak, and she seems to be the only one, as we watch a chain reaction of people who have interacted with each other losing their sight one by one. In case you are wondering why I haven't provided any character names in this summary, it's because there aren't any, which I guess we're supposed to take as a sign that this story could represent any group of people anywhere in the world.

So, if the ghastly cinematography doesn't drive you from the cinema, then perhaps the crushingly unsubtle allegory will. When Ruffalo is carted off to a quarantine facility for the blind, Moore decides to feign blindness in order to go with him, and the pair end up being the first inmates in a disused hospital that will quickly descend into a living hell. As the wards fill up with the newly blind, people start tripping over themselves, pissing and shitting in the corridors, losing their clothes and ultimately losing any sense of dignity. As the only sighted person in the building (a fact she keeps to herself), Moore does what she can to maintain order, and soon she and Ruffalo have set up a semi-stable society within Ward One, but some new arrivals in Ward Three upset the applecart. Led by the gun-toting, self-appointed "King of Ward Three" (Gael García Bernal), these inmates begin hording the food supplies and demanding payment for any rations. At first, the payment involves any jewellery and other valuables that people may still possess, but when that supply is exhausted, Bernal begins demanding women for food, and soon the female contingent of Ward One are lining up to be raped in order to secure some much needed sustenance.

The basic lesson of Blindness is obvious. This unexplained loss of sight is a simplistic metaphor for our inability or unwillingness to engage with – to really see – our fellow man, and in true Lord of the Flies style, a regression to a primal state leads to anarchy and savagery. Meirelles doesn't display much insight on this subject, however, and instead he just spends the bulk of two hours pushing our faces into the filth of human misery; showing us scene after scene of depravity without giving us any good reason to endure the endless barrage of nihilism. I suspect this kind of allegorical, heavily symbolic storytelling worked better on the page than it does on the screen, and in adapting Saramago's work, screenwriter Don McKellar has corralled the themes and incidents in a blunt fashion that leaves the film feeling didactic and preachy. McKellar actually serves double time in Blindness – he plays the thief who steals the Japanese man's car at the start of the film, before losing his sight soon after – but like most of the cast, he is given little to work with. Alice Braga (prostitute), Maury Chaykin (accountant), Sandra Oh (Minister for Health) and Danny Glover (wiser-than-thou sage) are among the name actors who inhabit the supporting roles, but all of them give shapeless, one-note performances, stumbling (literally) through the movie with no development or direction. The fact that none of the characters have names means we never really view them as characters at all; they're just a bunch of recognisable actors, playing blind to little effect.

Even Julianne Moore can't rise above the murk. As you'd expect, she throws herself completely into her role, but her character doesn't make much sense (as the only sighted person in the prison, why doesn't she stop Bernal before the mass rapes take place?), and her considerable efforts are ultimately wasted. After wallowing in despair, Blindness finally ends on a hopeful note with its deux ex machina finale, but this climax feels rushed and tacked-on, and hardly worth wading through the previous two hours for. It really is something to see such a collection of talent and resources coming together to produce a film that's so relentlessly alienating and misguided, but it isn't entirely a surprise given my reaction to earlier Fernando Meirelles films. He has always appeared to be a filmmaker more focused on the aesthetic value of his films than anything else, and when I reviewed his 2005 film The Constant Gardener I wrote: "In almost every scene the prime motivation seems to be visual impact over narrative coherence...it soon starts to distract the attention from what’s being said in a scene when the director insists on flooding your eyes every few seconds". Blindness is simply the director taking this style to indulgent extremes, and his frantic over-direction completely overwhelms the story and pushes its audience further away at every turn. Meirelles wants his film to explore the darkest aspects of human nature, but he leaves the viewer stranded in the same desperate state as his characters, hopelessly lost without a guide, and blinded by the light.
Philip Concannon
Share
‹
›
Home
View web version