Review - The Boy in the Striped Pyjamas 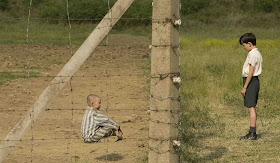 As a rule, I try to avoid spoiling the end of a film whenever I write a review. That's just common sense, you may think, but it does leave me with something of a dilemma when I write about a film like The Boy in the Striped Pyjamas. It's almost impossible to deal with Mark Herman's adaptation of John Boyne's bestseller without talking about that ending, a climax that completely changes the tone of the picture and leaves the viewer stunned. For much of The Boy in the Striped Pyjamas' running time, I watched the story unfold through eyes that were impressed but unmoved, appreciating the dedication with which the actors and filmmakers had gone about their business while never being completely drawn into the story. When the end credits started to roll, I felt like I had been hit by a truck.

The Boy in the Striped Pyjamas is a film about the Holocaust, so perhaps we shouldn't be surprised by the film's emotional heft, but it does seem like a surprisingly heavy load for a film aimed at a younger audience. After all, the film, like the book, is targeted primarily at children around the ages of 10-12, and therefore it is faced with the difficult task of portraying the Final Solution in a way that's palatable for younger viewers, while not simplifying of softening the true horror of it. It's a challenge The Boy in the Striped Pyjamas generally handles quite well. The central character is Bruno (Asa Butterfield), the 9 year-old son of a German officer (David Thewlis) who has been placed in charge of a concentration camp. When he gazes from the bedroom window of his family's new home, Bruno can see a strange farm beyond the forest, where everyone seems to be wearing the same pyjamas.

Despite warnings from his mother (Vera Farmiga) to stay within the confines of the house, an overpowering mixture of boredom and curiosity compels Bruno to explore the surrounding area, and when he comes up against the fenced perimeter of the camp, he meets a young boy named Shmuel (Jack Scanlon). The circumstances that allow the friendship to blossom between these two boys takes some swallowing – with this secluded corner of the camp seemingly free from any kind of patrols – but the two child actors give performances that invite us to accept such a situation, eager to see where this companionship will lead.

For Bruno, it leads to confusion and self-doubt. His pleasure at finding a friend is tempered by the anti-Semitic rhetoric he heard from his tutor, the stories Shmuel tells him about the camp contradict the propaganda film he sees his father screening, and when he is given the opportunity to stand up for Shmuel, he backs down, fearful of the intimidating soldier Lt. Kotler (Rupert Friend). The more Bruno tries to find out the truth, the more troubled he becomes. He is baffled by a Jewish prisoner (David Hayman) who seems to have given up a career as a doctor to peel potatoes for the family; he wonders what could be causing the foul-smelling plumes of black smoke that occasionally arise from the camp; and he is shocked when Kotler violently turns on a Jew who spills some wine while serving dinner. Through incidents like this, Bruno gets glimpses of the camp's true nature, while never quite being able to understand it or completely believe that it could be true, and Butterfield is often remarkably convincing as his character undergoes a difficult journey.

Herman's approach of suggesting such horrors without explicitly tackling them is effective. The Boy in the Striped Pyjamas suffers from the occasional authenticity issue (the characters all adopt strained English accents, which takes some getting used to), but as a family-oriented Holocaust drama it is smartly done. Herman's direction is efficient while lacking any real cinematic sense, although his filmmaking style does fit with the level of the production as a whole, which generally resembles a fairly classy BBC drama. He also draws fine performances from his actors, and aside from Butterfield and Scanlon, he is the beneficiary of some superb work by Vera Farmiga, and a turn from David Thewlis that grows in stature after an uncomfortable start.

Everything is overshadowed by the ending, though. The Boy in the Striped Pyjamas' tone shifts into a darker register in the final ten minutes, and it left me reeling, not only because of what happened, but the way in which the filmmakers seem to set up one kind of climax, before sucker-punching the viewer with another. It's a tough move, and it ensured this decent drama – which had been nothing but tasteful throughout – suddenly ends up being one of the most unexpectedly upsetting pictures of the year. I'm still not sure about my own feelings towards this development, it is powerful, sure, but it also carries a tragic weight that is perhaps too much for this slender movie to bear. Whether or not final scenes of The Boy in the Striped Pyjamas entirely work, one hopes they will have the intended effect of encouraging parents to discuss the Holocaust with their children, to ensure it is never forgotten by younger generations, and one can only admire the filmmakers for following through on their story which such conviction.
Philip Concannon
Share
‹
›
Home
View web version