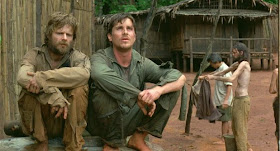 Throughout his magnificently eclectic career, the one consistent factor in Werner Herzog's work has been his unpredictability. He has delivered some of the strangest and most compelling films to be found anywhere over the past 40 years – both in fiction and documentary – and he has travelled to some of the most inhospitable places on earth in the process, often pushing himself and those around him to the edge of madness and beyond. With every film he has taken us to somewhere new and mysterious, which makes Rescue Dawn perhaps the most surprising move of his career to date, marking the closest Herzog has ever come to repeating himself.

Rescue Dawn is the story of Dieter Dengler, a German-born American immigrant who joined the US air force to fulfil his dream of flight. He signed up just in time for the Vietnam War, and forty minutes into his first bombing raid, Dieter Dengler was shot down and captured by the Pathet Lao, who held him in a Laotian prison camp where he was frequently subjected to torture. His story was originally told by Herzog in his superb 1997 documentary Little Dieter Needs to Fly, in which the director took Dengler back to the scene of his imprisonment, asking him to describe and recreate both his experiences and his daring escape. In the film, Dengler came across as a warm and engaging character who was philosophical about the experiences he had been through, and the resulting documentary worked as both a fascinating character study and a powerful testament to the human spirit.

Herzog clearly feels he has unfinished business with this subject, though, and now he has reworked it as a dramatic feature, with Christian Bale taking on the lead role. Why has Herzog decided to revisit this particular story? Perhaps it is an attempt from a director who has always worked at the outside the margins of the cinematic establishment to finally reach a wider audience. After all, the story of Dengler's escape from the camp and subsequent rescue is one that lends itself well to a straightforward action movie narrative, and on first glance that's exactly what Rescue Dawn is. The film spends little time on the preliminaries before Dieter takes to the skies on his ill-fated mission, survives the crash by the skin of his teeth, and is captured by the Pathet Lao. He is marched through the jungle to the camp, where he refuses to sign a statement denouncing America's actions in the region ("I love America" he says, "America gave me wings"). Dengler is then incarcerated alongside two fellow US soldiers, Duane Martin (Steve Zahn) and Gene McBroom (Jeremy Davies), both of whom are bearded and shockingly emaciated after their time in captivity.Is it even appropriate to call Jeremy Davies an actor anymore? As far as I can tell he's nothing more than the same mumbling, irritating bag of tics and gestures in every single film, and he's no different here, giving a painfully annoying display which renders much of his character's dialogue unintelligible. Fortunately, Gene exists mostly in the background for much of the film, and it's the tender companionship between Dieter and Duane that gives Rescue Dawn its emotional centre. This is just the latest in a string of remarkable performances from Bale, who again throws himself completely into a challenging and physically demanding role. He plays Dieter as cocky and indefatigable, smiling in the face of his torturers and maintaining a heroic sense of optimism and determination even as he wastes away before our eyes. Bale doesn't quite go to the extremes here that he did in The Machinist – thank God – but in a way this weight-loss is more shocking, because we can see the weight falling away from the healthy, fresh-faced character who met at the start of the film.We have come to expect such acting from Bale, but on this occasion he is matched every step of the way – and perhaps even outdone – by his co-star Steve Zahn. An actor who has been known for funny supporting turns in comedy films up to now, Zahn delivers an absolutely knockout display as Duane, a man driven to the edge by his time in captivity and clinging on to life by his fingernails. Zahn's soft and likable persona works for his character here by making Duane a heartbreaking figure; with the skin hanging loosely around his bones and a thick, tangled beard covering most of his face, we mostly experience Duane's emotions by looking into his eyes – and those eyes are wide with bottomless pain, hunger and fear. Together Bale and Zahn create an honest and resonant bond, to the point where the offering of a single broken shoe can work as a deeply moving act of friendship.

After their escape, as Dieter and Duane drag themselves through the wilderness, Rescue Dawn takes on a different tone, perhaps one more recognisably "Herzog". Nobody else in cinema has ever shot the jungle quite like this filmmaker, and when Duane warns Dieter that "the jungle is the prison", he ensures that we experience it that way. A weak and weary Bale and Zahn hack their way into the undergrowth, delving into their reserves of strength and courage to overcome this unforgiving terrain; and as they stumble through dense foliage, mudslides and raging rapids, there's an ever-present edge of danger which is particular to very few directors. Rescue Dawn lacks the operatic excess and offbeat tone of some of Herzog's previous jaunts into the jungle, but he still manages to create some haunting and delirious moments, crafting a textured atmosphere which elevates this straightforward tale into something more haunting.Rescue Dawn sticks pretty closely to events as recounted by Dengler himself, although Herzog has excised a couple of anecdotes which may have been powerful on screen. We don't see the bear who became such a significant figure for Dengler ("the bear meant death to me" he says in the documentary, "and in the end it was my only friend"), and we don't experience Dengler's vision of his dead father who guided him to safety. Instead, the stripped-down narrative of this film has a directness which complements Dieter Dengler's own dogged survivalism, and it sucks us into his experiences before allowing us the emotional uplift of his tale's extraordinary climax. This is not quite a film to rank alongside the classics in Herzog's oeuvre – it lacks the uniqueness of pictures like Aguirre, The Wrath of God, The Enigma of Kaspar Hauser or Fitzcarraldo – but it remains a true Werner Herzog film. It plays like an exciting, mainstream war movie, but at its heart Rescue Dawn is very much about the same themes the director has always explored – man against nature, truth against fiction, and our own capabilities when pushed to the very limits. Dieter Dengler's story is a gripping, powerful and inspiring one, and the hands of this great, great filmmaker, it is a story that is well worth a second rendition.