Review - No Country for Old Men

"I was sheriff of this county when I was twenty-five. Hard to believe", a voice tells us over the opening images of No Country for Old Men, as we watch one shot of the stark Texan landscape dissolving into another. This is Sherriff Ed Tom Bell (Tommy Lee Jones) speaking; a lawman nearing retirement whose grouchy voice takes on an note of despair as he contemplates the times he is now living in. "The crime you see now, it's hard to even take its measure," he tells us, "you can say it's my job to fight it but I don't know what it is anymore". After his opening narration has concluded, we are invited to witness the kind of crime he is talking about; a prisoner, his hands manacled, strangles a cop to death with brutal efficiency. His wide eyes stare at the ceiling as he relishes the cop's dying breaths, and then the man calmly exhales in a satisfied fashion when the body goes limp. The sequence is violent, abrupt and deeply chilling. 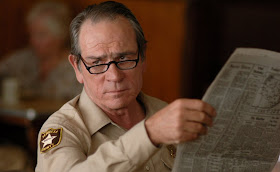 Joel and Ethan Coen have rarely taken their material so seriously. This adaptation of Cormac McCarthy's gripping 2005 novel marks the first time the brothers have translated a book for the screen, and the task seems to have fired their creative juices and artistic sensibilities in ways we haven't seen since their masterful Fargo. The Coens find the perfect pitch for McCarthy's story, maintaining the novel's spare and clinical narrative style, and generating a level of tension, which is as surprising from these filmmakers as it is effective. Of course, the Coens still provide us with moments of their trademark deadpan levity – a couple of scenes will make you laugh out loud – but the directors never lose that fine balance, just giving us a cluster of humorous asides which come as a blessed relief amidst the film's pervading sense of fear and fatalism.

No Country for Old Men is set in Texas in the early 1980's. After being hooked by the opening scenes described above, we meet the film's central protagonist Llewelyn Moss (an outstanding Josh Brolin), the archetypal normal guy brought low by one mistake. He is out hunting in the afternoon sun when he comes across a grisly scene, a drugs exchange gone bad, with abandoned cars and dead bodies lying scattered in the dust. He finds a huge stash of heroin in the back of one truck, and some distance away he comes across a case containing over $2 million in cash. He takes the money, and in doing so he unleashes a chain reaction of bloodshed, with a relentless force of evil named Anton Chigurh (Javier Bardem) hell-bent on tracking him down and retrieving the stash.

Chigurh was a compelling villain on the page and Javier Bardem's embodiment of this character is astonishing. He cuts an unusual figure with his floppy haircut, but he possesses a presence that sends shivers down the spine whenever he appears, and the methodical manner in which he goes about his business – killing his victims with a cold, professional detachment – is incredibly unsettling. In Bardem's hands, this soulless and terrifying psychopath lives up to both Moss's description of him as "the ultimate badass", and Bell's contention that he is almost like a ghost. He acts as the Yang to the Ying of Josh Brolin's essentially decent character, who quickly finds himself out of his depth as the plot escalates, but who is resourceful and intelligent, displaying the instincts of a hunter even when he is the prey.

No Country for Old Men is typically peppered with actors who make a vivid impression in supporting roles. Woody Harrelson appears as a cocky, swaggering bounty hunter; Stephen Root is strong as the businessman behind the drug deal that set these events in motion; and Kelly McDonald turns in an outstanding display as Llewelyn's wife, making her an affecting figure in just a handful of scenes. The Coens have always cast their movies well, though, and No Country for Old Men is more notable for the advancement in other key areas of their work. There's a pensiveness and restraint about their direction here; the film recalls the likes of Blood Simple, Miller's Crossing, Fargo and The Man Who Wasn't There in spirit, but it lacks the layer of irony which those films displayed. It is also one of the rare Coen films which doesn't feel like it is constantly nodding to pictures or genres from a bygone cinematic age; instead, they play McCarthy's narrative with an admirably straight bat, and the result is mesmerising.

The Coens stage a series of sequences in this film which are a wonder to behold. Many of No Country for Old Men's most memorable passages occur during the cat-and-mouse games between Moss and Chigurh – involving much stalking through darkened corridors and adjacent motel rooms – and working in conjunction with the magnificent Roger Deakins (is there a better cinematographer in cinema today?), they craft a series of nerve-jangling set-pieces. Carter Burwell is again credited with the film's musical score; but beyond the end credits I can't remember any music. What I do remember is the frequent, eerie silence – the air thick with tension – and the subtly brilliant sound design: like the ominous hiss emitted by Chigurh's portable gas canister, just before we hear the horrible phud of his bolt-gun claiming another victim. This is simply a flawlessly crafted picture at every level.

But in spite of the peerless craftsmanship on show here, will No Country for Old Men still disappoint many viewers? McCarthy's novel has a habit of omitting key incidents, or giving them just a brief mention, and the story's ending intentionally leaves loose ends dangling and many questions unanswered. His violent tale is a messy one, replete with randomness and ambiguity – that's what allows it to get under the skin so brilliantly – and the Coens have translated it to the screen without trying to embellish or tidy it up in any way. This means we have a situation where the major climactic incident takes place off-screen, where the big face-off we have been anticipating never really occurs, and where the film ends in a quiet, melancholic fashion rather than closing with a bang. It is a picture that refuses to satisfy the audience in a straightforward or conventional manner, but it is easy to imagine this haunting film having a long life beyond the final credits.

This is exactly what the Coen Brothers needed after their clutch of recent disappointing comedies, and while I'm not quite sure yet if it is the best work they have ever done (I'll need a second viewing, which I really can't wait for) it is definitely their most distinctive and mature film to date. In Cormac McCarthy they seem to have found a kindred spirit, a writer whose work allows them to explore themes such as the cruel and random nature of violence, and to lament for old moral certainties being swept away by "the rising of the tide". We feel much of this simply by looking at the weary, defeated demeanour of Tommy Lee Jones, as he surveys the carnage surrounding him with an air of dismay and incomprehension. Rarely have this actor's particular gifts been put to such effective use; and, in a resonant epilogue, his face, voice and body language tell us everything as he recounts an ambiguous dream. He looks for all the world like a man who has borne witness to too much evil; a man who can never forget the terrible things that he has seen.
Philip Concannon
Share
‹
›
Home
View web version