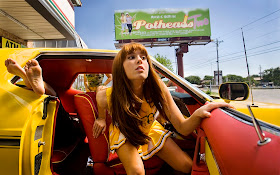 The publicity for Death Proof describes it as 'The 5th Film by Quentin Tarantino', but what we're getting here is really only half of the story. Earlier this year Tarantino teamed up with Robert Rodriguez to present Grindhouse, a three-hour extravaganza celebrating the scuzzy B-movie tradition which so enraptured the two filmmakers during their formative years. The idea was to offer two movies for the price of one, with Rodriguez's zombie movie Planet Terror preceding Tarantino's Death Proof, and a batch of fake trailers for similarly trashy fare popping up in between. In addition, the spirit of the grindhouse cinema experience was evoked by the scratchy prints, mismatched film stock, missing reels and deliberate continuity errors. Depending on your point of view, Grindhouse was the most eagerly anticipated film of the year, or an ill-advised vanity project. Judging by the film's miserable box-office returns, it turned out to be the latter.

In an attempt to rescue something from this mess, the two films have been separated, expanded and will now be released in isolation. Tarantino's Death Proof is the first of the pictures to arrive on these shores (Planet Terror has not yet appeared on the radar), with around twenty minutes of footage being added to his original Grindhouse cut, and one wonders if that extra padding is directly responsible for the film being such a tedious drone of a movie. There were many reasons why I hated Tarantino's Kill Bill – specifically the ghastly Volume I, although the second part left me cold too – but I could never justifiably accuse those films of being boring. Death Proof, on the other hand, is lethally dull in ways I could never imagine from this once vital director.

One of the film's chief problems is the fact that is feels like such a pointless exercise now it has been extracted from its Grindhouse casing. Divorced from the whole experience of Tarantino and Rodriguez's double-bill, Death Proof seems even more like a self-indulgent wallow in the director's own film fandom, full of references to his favourite movies (he even references his own back catalogue a number of times) and slavishly crafted to match the dubious style and aesthetic of those sleazy 70's pics. But while Tarantino is undoubtedly having a great time in the middle of all this, what's in it for the rest of us? The director may think we will all be as thrilled as he is by the sight of four young women sitting around a table discussing Vanishing Point for ten minutes, but his dialogue feels lazy and almost self-parodic this time around, and the result is a number of interminable gaps throughout the film in which people talk and talk and talk while saying nothing of interest.

There is a plot, of sorts, but in the spirit of old exploitation movies it barely deserves to be described as such. The film opens with a group of three feisty young women (Vanessa Ferlito, Jordan Ladd and Sydney Poitier) embarking on a night out. In the car they discuss sex, weed and their plans for the weekend, and then they settle down in a bar where they knock back shots and dance sexily to a number of jukebox tunes. They also meet Stuntman Mike (Kurt Russell, doing much with little), a taciturn loner with a scar running down one side of his face who has been observing this female posse throughout the evening. Mike gets his kicks from killing young women with his 'death proof' stunt car, and after the slow build-up we are treated to the sight of Mike's modified car in action. He sets about a single young blonde first (Rose McGowan), giving her a lift and then hurling her around the car's passenger box like a rag doll until she collapses in a bloody, quivering heap. Then comes the coup de grâce – Mike shuts off his headlights and engineers a head-on collision with the car carrying the group of girls we met earlier. Tarantino lingers on the details in showing us what a 200 mile per hour collision does to four female bodies; he even cuts back a couple of times to let us enjoy each girl's grisly fate in unsparing slow motion.

It's cold and nasty stuff, and after enduring forty-odd minutes of tepid foreplay it provides a most unsatisfying climax, but there's still more to come. A caption reading "fourteen months later" leads us into Death Proof's second section, in which only the personnel seems to have changed. The narrative trajectory again sees Stuntman Mike pitting himself against a group of women, with the new female cast comprising of Rosario Dawson, Zoë Bell, Tracie Thoms and Mary Elizabeth Winstead. This half of the picture is a little more tolerable, even if it suffers from the same witless verbal diarrhoea as the first, and maybe that's because Tarantino forgets about aping the grindhouse look about halfway through and gives us something which actually resembles a real movie. The final car chase is the first time Grindhouse develops any kind of momentum, with some first-rate stunt work on display (Zoë Bell excels here, although her acting performance is atrocious), but it's still sub-par filmmaking from a director we expect so much from.

What happened to Tarantino? Ten years ago he made Jackie Brown, a film which seemed to display a newfound maturity in his hugely exciting career, but after a six-year break his Kill Bill and Death Proof indicates a dismaying regression into adolescent fantasy. They are all style and nothing else, with Tarantino grabbing bits and pieces from obscure old movies and tossing them together in a masturbatory fashion, leading to shallow movies lacking in any sort of internal consistency or coherence. None of his characters feel real – Tarantino would rather have iconic figures in his films than human beings – and the less said about his attitude to the women the better. His last three films (counting Kill Bill as two) have been notable for the frequent pain and suffering he has inflicted on his female characters; there's something really twisted and callous about it. In Death Proof he blithely tosses in the notion that Mary Elizabeth Winstead is about to raped off-camera without giving it a second though, and his salacious focus on female bodies being ripped apart in the film's big crash sequence is deeply distasteful.

Death Proof is a trivial waste of our time and a scandalous waste of its director's considerable ability. Tarantino might smugly assume that we are all as fascinated by the minutiae of exploitation pictures as he clearly is, or that we are as deeply entranced by his trademark dialogue as he is, but that simply isn't the case. A decade ago the idea of this filmmaker turning in a film as poorly structured, ugly, dull and vapid as Death Proof would have been unthinkable; but his latest film bears the mark of a man who knows everything about movies while knowing nothing about life, and his work will continue to decline until he widens his viewpoint beyond his own increasingly uninteresting obsessions. Quentin Tarantino remains a director capable of genuine brilliance, and his work is borne of a genuine love for the medium, but right now he's simply making films for himself and no one else.
Philip Concannon
Share
‹
›
Home
View web version