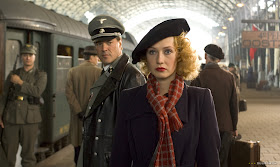 After two decades in Hollywood which have seen him direct a series of science-fiction films, one of the most iconic thrillers of the 90’s, and the “so bad it’s good” cult classic Showgirls, Paul Verhoeven’s Black Book is a real change of direction. This WWII thriller is the first film Verhoeven has made in his native Holland since 1983’s The Fourth Man, and it’s a surprisingly restrained and old-fashioned affair for much of its running time. But there is a specific point in the early stages of the picture which clearly marks this as a quintessential Paul Verhoeven film; when the film’s heroine must dye her hair blonde to avoid detection - all her hair - and the director lets us watch as she dutifully colours the area between her legs. I suppose old habits die hard.

That heroine is Rachel, and it’s her extraordinary adventures which provide the central drama of Black Book. We first meet her in 1956, living in a kibbutz in Israel, and a chance meeting with an old friend sparks a film-long flashback detailing her wartime experiences. This decision to bookend the drama with scenes of Rachel living in Israel isn’t a great one, it reveals that the heroine survived all of the ordeals we’re about to witness, and that saps a little tension - particularly when a number of major characters do meet with surprising deaths. It doesn’t do too much damage though, and for the most part Black Book is a terrifically exciting picture.

The main thrust of the narrative takes place in Holland in 1944, with the southern half of the country already liberated. Unfortunately, a number of Jews must remain in hiding in the north of the country, which is still in German hands, and Rachel is one of them, spending her days in the farmhouse of a kind Catholic family. However, Rachel’s fortunes change dramatically when her sanctuary is destroyed in a bombing raid, and she goes on the run, meeting up with her family who have discovered a way to cross the river into safe territory. It seems too good to be true - and, of course, it is. The boat is ambushed by Nazis who slaughter the passengers and raid their dead bodies for valuables, with Rachel surviving by the skin of her teeth and swimming to safety.

Phew! That’s two near-death experiences for Rachel already and the picture has barely started. Paul Verhoeven and co-writer Gerard Soeteman claim that Black Book has been based on real events - a number of which were stories they uncovered when they were doing research for their previous war film Soldier of Orange - but I get the feeling they’ve been a little liberal with the facts. Black Book is a succession of scrapes and cliff-hangers strung together in breathless fashion, with logic and plausibility often being stretched to breaking point as Rachel gets thrown from one tight spot to another; but the occasionally daft nature of the plot doesn’t annoy because Verhoeven never allows the forward momentum of the picture to slacken. This is a brilliantly paced piece of filmmaking; there’s hardly a dull moment in its 145 minutes, and - for about two-thirds of the film at least - Verhoeven admirably manages to maintain a clear narrative thread even while the plot twists build up left, right and centre.
Black Book also benefits from a stunning performance from Carice van Houten in the central role which gives the film a rock-solid centre. Van Houten is beautiful, charismatic and sly - and she imbues her part with an hefty dose of intelligence and emotion. It’s a role which really asks van Houten to stretch herself in every department, and she’s never found wanting. She certainly needs to utilise all of her virtues when she hooks up with a group of Dutch resistance fighters; they need her to use her womanly wiles to seduce a German commanding officer, and gain a position within his office in order to relay vital information back to her comrades. With her newly dyed blonde locks in place and under the pseudonym Ellis de Vries, Rachel begins to put the moves on Müntze (Sebastian Koch), but he soon reveals himself to be a decent and honest man in spite of his position within the German army, and Rachel finds her loyalties put to the test when she falls in love with the man who she has been ordered to deceive.

The romantic angle of the film works like a charm, thanks to the superb performances from van Houten and Koch, and their strong chemistry keeps emotions running high as the film lays various obstacles in front of their relationship. Black Book is a throwback to the kind of old-style Hollywood movies which blended daring acts of heroism with romantic melodrama to create a heady brew, and it’s a mixture Verhoeven pulls off with aplomb. Of course, he throws a fair amount of sex into the mix - van Houten seems to spend a quarter of the film with her breasts exposed - but, surprisingly, it rarely feels gratuitous, and the development of the central relationship is convincingly drawn. At some €16 million Black Book is the most expensive Dutch film ever made, and the money is all up there on the screen. The excellent production and costume design helps create an authentic depiction of wartime Holland, and cinematographer Karl Walter Lindenlaub (who, like Verhoeven, has spent years working on mainstream Hollywood films) gives the picture a classy sheen which is always easy on the eye.

Now, a lot of people who are reading this review may be surprised to see words such as ‘classy’, ‘restrained’ and ‘old-fashioned’ used in conjunction with a Paul Verhoeven picture, but this really is completely different style of Verhoeven film, one which shares more common ground with his acclaimed Dutch films than his recent American ventures. However, Verhoeven can’t seem to keep a lid on his sensationalistic and voyeuristic impulses all the way through, and in the final third of the film Black Book begins to slip out of his grasp a little. The picture seems to develop nastier edge as it proceeds, with a number of deaths growing increasingly graphic and sadistic, and the same goes for the treatment Rachel is subjected to. The film’s tipping point occurs when the heroine is at the centre of a horrible, completely repulsive act of degradation which - in my view - was taking things too far. Of course, war films which aim to depict the terrible reality of their stories have often shown us things we don’t want to see, but these darker aspects are out of step with the adventurous slice of derring-do the director has served up previously, and it leaves a nasty taste in the mouth. As well as the troublesome shift in tone, Black Book has problems with the increasing amount of double-crosses and triple-crosses its plot throws at the viewer in the closing stages, and the hitherto well-crafted narrative begins to visibly strain under the weight of its own contrivances. The climax lacks the punch one feels it ought to possess, but van Houten’s sterling efforts help imbue many of the final scenes with a note of raw emotion, which is some consolation at least.

Despite its flawed climactic act, Paul Verhoeven’s return to his native land must ultimately be seen as a triumphant one, and one which goes a long way to redeeming his reputation after too many bad movies. Black Book is an admittedly lopsided effort - and Verhoeven almost derails the whole thing by giving into his basic instincts towards the end of the picture - but I came out feeling like I’d had my money’s worth with its exciting and surprising story. It offers us romance and intrigue, plenty of tense and thrilling sequences, and a knockout of a central performance; and Verhoeven even throws in more cock jokes than you could ever expect to find in a WWII film, and a bullet removal scene which will have you helpless with laughter. Really, who could ask for anything more than that?
Philip Concannon
Share
‹
›
Home
View web version