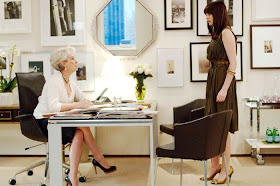 For three decades Meryl Streep has remained pretty much unchallenged as the greatest actress of her generation. Her extraordinary range, her dedication to the craft and her ability to disappear into a character has seen her win more Oscar nominations than any other actress; but it's her hitherto undervalued comic skills which will probably see her pick up nomination number fourteen early next year. The Devil Wears Prada stars Streep as the boss from hell, a legendary editor of a New York fashion magazine who makes mincemeat of anyone unfortunate enough to get in her way. It's a plum role for Streep, and her typically domineering display plays a huge part in making The Devil Wears Prada a better film than it has any right to be. This adaptation of Lauren Weisberger's novel - a thinly veiled roman à clef about Vogue editor Anna Wintour - is a painfully underdeveloped affair which offers a simple-minded morality tale and lacks any real satirical bite. However, Streep leads a cluster of excellent performances, and there are one or two moments of genuine class in the script which give this rather shallow film just enough energy to keep it alive.

The story itself is banal. Anne Hathaway is Andrea Sachs (or Andy), a young woman with dreams of being a journalist, but whose attempts to find work in that field have failed to bear fruit. Soon she's desperate to take a job anywhere, and her search leads her to the headquarters of Runway magazine, a glossy fashion periodical which is ruled over by Miranda Priestly (Streep). The vacancy is for Miranda's second assistant, and from the minute Andy is greeted by first assistant Emily (Emily Blunt) it's quite clear that she doesn't belong in this strange world. She doesn't care about fashion, she doesn't look or dress like any of the women already employed here, and she even commits the cardinal sin of not knowing who Miranda Priestly is. After a short and frosty interview Andy is sure her chances of employment are dead in the water, but Miranda sees something she likes in this rough diamond and she decides to take a chance on Andy.

That's when the fun starts, and the early part of The Devil Wears Prada is pretty good fun, in an unoriginal kind of way. Andy quickly realises that she's completely out of her depth in this demanding position; her ignorance of the fashion world means she doesn't have a clue what anyone is talking about ("could you please spell Gabbana?”), and she has to put up with constant snide remarks from her colleagues about her frumpy, unfashionable wardrobe - although jokes about Andy being overweight and plain are frankly ludicrous against the gorgeous Hathaway. Miranda is a nightmare to work for, swamping Andy with one crazy demand after another and she never gives more information than she needs to ("please bore someone else with your questions”). But Andy is determined to stick it out; she knows that having a good stint as Miranda Priestly's assistant on her resumé will open up a lot of doors for her in the future.

This is another step forward for Anne Hathaway in a bid to distance herself from The Princess Diaries, but the film's narrative arc doesn't offer much of a change. Once again she's the ungainly and unglamorous ingénue who is plunged into a world far removed from her own and - after a fair dose of knockabout comedy - she begins to thrive and learns a few important lessons along the way. Hathaway is a lovely heroine - her welcoming eyes and radiant smile instantly win the audience over - and she gives a fine performance here; down-to-earth, plausible and funny. Unfortunately, Andrea Sachs is not a particularly interesting character and the various ups and downs screenwriter Aline Brosh McKenna gives her are disappointingly unimaginative. Andy starts to take control of her work, but her personal life predictably begins to suffer with her too-perfect boyfriend (Adrian Grenier) lamenting the amount of time they spend apart. She's tempted by a smooth-talking playboy (Simon Baker, in an awful role) and she eventually realises that success in the fashion world is costing her the values and integrity she once held so dear. Andy is left with the choice of making it big or doing the right thing - I'll let you guess which way she jumps.

It's all very tired and prosaic, and a screenplay this dramatically slender would be fatal for many films, but The Devil Wears Prada has a number of aces among its supporting cast. Meryl Streep is just wonderful here. She takes a character who could have become a scenery-chewing monster to rank alongside Cruella De Vil and she goes in the opposite direction, underplaying the role for maximum impact. She never raises her voice, and instead she unleashes her poisonous barbs in the same velvety monotone which doesn't alter throughout the film. Streep's timing is as impeccable as ever, and she produces most of the film's laughs through the subtlest looks or gestures. But this is no cartoon villain, and Streep has a fine scene late on in which she gives us a glimpse - just a glimpse - of the vulnerability hiding under Miranda's steel-plated armour.

Everyone else inevitably exists in Miranda's shadow, but Emily Blunt and Stanley Tucci give performances which almost steal the film. Blunt is terrific as Miranda's first assistant, whose bitchy demeanour scarcely conceals her panicky realisation that her dream job is hanging by a thread at all times, and Tucci offers tremendous support as Miranda's long-term colleague Nigel. His deadpan turn brings depth and tenderness to a man who has mastered the art of surviving Miranda Priestly, and what a breath of fresh air it is to see a gay character in a film set in the fashion world who is allowed to be camp without being turned into a shrieking stereotype.

Director David Frankel cut his teeth on Sex and the City, so he knows a thing or two about shooting attractive women in stylish clothes, and the film generally looks glossy and sharp. He doesn't have much spark in his direction but he does put together a few snappy montages which help to kick the film along, and he also handle the film's tone with some skill. In fact, one of the chief pleasures of The Devil Wears Prada is the way it presents a view of the fashion world which contains laughs, but is also surprisingly serious and authentic - never indulging in the Prêt-à-Porter-style spoofing which would have been so easy. When one of Miranda's assistants holds up two identical-looking belts and says "they're both so different”, Andy stifles a laugh, as do the viewers; but Miranda responds with a quite brilliant speech which explains how Andy's frumpy, unfashionable sweater is tied inextricably into the industry which she views with such disdain.

It's moments like that which save The Devil Wears Prada from itself. The film's bog-standard plotting threatens to grind it to a halt in the final third, but it keeps throwing up smart touches which revived my flagging interest. I even surprised myself by caring about some of the characters' fates, but probably not in the way the filmmakers expected. I wasn't really bothered by any of Andy's tired little moral dilemmas as they played out in such dull fashion; but I found myself really caring about Emily's thwarted desire to go to Paris, I cared about Nigel's attempts to get his dream job and, of course, I really wanted the imperious Miranda to keep her place on the Runway throne. Some people may be startled to hear that I cared more about the scheming ice queen than the doe-eyed sweetheart, but it shouldn't really be that much of a surprise. After all, the Devil is always so much more fun.
Philip Concannon
Share
‹
›
Home
View web version