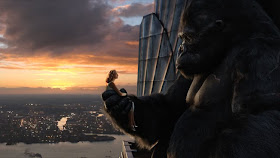 Over an evocative depiction of depression-era New York, Al Jolson’s jaunty tune opens Peter Jackson’s King Kong, and the lyrics could also describe the director’s own exalted position in Hollywood. After the astonishing success of his Lord of the Rings trilogy Jackson was given carte blanche to make the film of his dreams, and he chose to remake his own favourite film, the movie which inspired him to become a director. Merian Cooper’s iconic King Kong has already been remade once, with the regrettable 1976 version showing how not to do it, but this remake is the product of a director with a deep love and reverence for the original - and it shows.

Jackson’s King Kong sticks closely to the original story and the screenplay, by Jackson and his regular collaborators Fran Walsh and Philippa Boyens, simply fleshes out the central characters and expands on the details of the first film. A slightly miscast Jack Black takes the role of egotistical and underhand film director Carl Denham, whose epic movie is threatened with closure by producers unhappy with the spiralling budget and lack of decent footage. Denham’s madcap plan to shoot on an uncharted island is the final straw and when he realises that he’s on the verge of failure he rushes his crew onto a rusty old steam ship before anyone can stop him. Unfortunately, Denham lacks a leading lady and his movie will be sunk if he can’t find one before the ship sets sail.

Ann Darrow (Naomi Watts) is a struggling vaudeville actress performing slapstick routines in half-empty theatres for uninterested punters. She dreams of something more - perhaps a part in a play by the renowned writer Jack Driscoll (a lifeless Adrien Brody), for example - and fate lends a hand when Denham spots her in the street and decides she’s going to be his new star. She is unsure at first, but Denham’s revelation that Jack Driscoll himself is writing the screenplay persuades the star-struck Ann to take the plunge.

The boat sets sail and after a close shave with some rocks they find the mysterious Skull Island populated by hordes of dark-skinned savages (perhaps a nostalgic touch Jackson could have toned down), who capture Ann and offer her up as a sacrifice to the mighty gorilla King Kong. It’s an offer that’s happily accepted by the beast and as he hightails it off into the wilderness with Ann in his grip, the rest of the crew follow in a desperate attempt to save her.

The major differences between this King Kong and the original are in terms of scale and length. Jackson’s Kong comes in at 187 minutes - almost twice as long as the 1933 film - and for a while it seems like the excessive running time will be the film’s fatal flaw. The opening hour certainly could do with a little tightening. The script labours over bringing the three principle characters together and the surfeit of unnecessary supporting characters squeezed in around the margins of the narrative don’t help matters, leaving the first act feeling a little bloated. Jackson’s scene transitions are occasionally on the clunky side, and it’s a relief when Skull Island, and the real reason we’ve come to see the film, finally looms into view.

Once the mighty ape disappears into the jungle with Ann, King Kong kicks up a gear and never looks back. The relatively wobbly opening hour is soon forgotten as Jackson floods the screen with breathtaking action sequences and displays his full command of the spectacular CGI effects. The visual magic used to bring this version of King Kong to life simply beggars belief. Many scenes, such as the extraordinary spectacle of Kong protecting Anne from multiple dinosaurs, were completely computer-generated but Jackson manages to seamlessly integrate them into the whole and these sequences have pleasingly weighty and realistic feel to them. Jackson delivers scene after scene of incredible exploits and he occasionally threatens to go too far, with the film often seeming in danger of being overwhelmed by the relentlessly intense nature of this rollercoaster ride, but for the most part his control is exemplary.

Despite all the thrills, spills and wonderful effects on show here, what really makes King KongLord of the Rings’ Gollum, Andy Serkis provides the movements for the gorilla and his portrayal makes Kong an incredibly realistic creation. The scenes between Ann and Kong are just wonderful. Ann is understandably terrified of Kong at first, but she soon grows to see him as her protector and a deep bond begins to flourish between them. The vaudeville act she performs for a bemused Kong is a treat; the pair’s quiet awe as they contemplate the beauty of the sunset is majestic; and a later scene in New York which mirrors it is heartbreaking. something special is the central relationship between Ann and Kong. As Ann, Naomi Watts delivers a sensational performance and the tangible chemistry she develops with Kong is this film’s strongest asset. Like

After a tricky start Jackson truly delivers with the second two hours of his monstrous monster movie. The scope of his ambition is so immense, and the bravado with which he carries it off so impressive, that one can’t fail to be swept up in the whole experience. Jackson is leagues ahead of his contemporaries in terms of this kind of epic filmmaking and his passion for the source material seeps through every frame. Jackson restores the original’s famously cut ‘spider pit’ sequence in all its creep-crawly glory (much of the film will be too intense for some younger viewers); he paints everything on the largest canvas he can possibly find with Kong facing seven planes at the climax instead of the original three; he never shows the viewer something once if he can show it twice. You can call this kind of filmmaking excessive, you can call it overkill, or you can just sit back and be thankful that there are still filmmakers like Jackson aiming for the stars.

When all is said and done, King Kong is much like the beast itself; huge, loud, unwieldy, capable of moments of grace, and so powerful that resistance is futile. The film is flawed, overlong and crazily self-indulgent - but who cares when it delivers such magnificent action and the most touching love story of the year? For better or for worse, Jackson’s grand folly has to be seen to be believed.

He’s still sitting on top of the world.