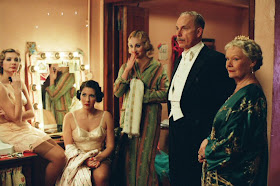 When Hitler’s Luftwaffe were raining bombs on London day and night, and hordes of frightened young men were heading out to fight for their country, Mrs Laura Henderson (Judi Dench) knew what people needed - a saucy song and dance show full of show tunes and naked young women. After the death of her husband, wealthy widow Mrs Henderson purchased the dilapidated Windmill Theatre in London’s West End and, in conjunction with experienced theatre manager Vivian Van Damm (Bob Hoskins), defied the moral conventions of the time to produce a revolutionary adult show which ran round the clock and lifted the spirits of many young soldiers before they went to war.

Mrs Henderson’s story is one of determination, eccentricity, stiff upper lips and all the other typically British attributes which films made in these isles love to include. It’s a special story for sure but, despite being bolstered by a whirlwind performance from Judi Dench in the lead role, Stephen Frears’ Mrs Henderson Presents never manages to become special itself; finding itself bogged down by thin characterisation, slack direction and an unhappy attempt to blend typically British saucy humour with the pathos of war.

The film’s ultimately unsatisfying effect is extremely disappointing after things got off to such a promising start. The first half of Mrs Henderson Presents is a sprightly and amusing affair. The action opens with the funeral of Mrs Henderson’s husband in 1937. After the funeral Mrs Henderson takes a boat out into the middle of the lake to shed her tears in private, and then puts on a brave face before facing the friends and acquaintances at his wake. Her closest friend Lady Conway (Thelma Barlow) is intrigued to know how exactly Mrs Henderson plans to fill her time, suggesting that she might find herself a toy boy to fill the hole in her life, but Laura is nothing if not unconventional and her decision to purchase and rejuvenate the Windmill Theatre takes everyone by surprise.

The screenplay by Martin Sherman sets the plot in motion with skill and catches the attention with a healthy dose of wry humour. The film initially focuses on the theatre’s launch and the increasingly fraught relationship between Mrs Henderson and Mr Van Damm; as her feisty, interfering attitude continually tests his patience and undermines his authority. The script is littered with plenty of barbed dialogue and one-liners which are delivered with relish by Dench and Hoskins, and the highly entertaining repartee of this relationship is the motor which successfully drives the film forward for while.

Unfortunately this enjoyable tone can’t last and when World War II is added into the mix it throws the film’s deficiencies into sharp relief. The film attempts to lend some emotional weight to the characters at this point; revealing the death of Mrs Henderson’s son in the first War and linking Van Damm’s Jewish to the Nazi’s rounding up of Dutch Jews, but these elements are introduced with a clunking lack of grace and they stall the momentum which had been established.

Likewise, Frears attempts to wring plenty of pathos from the story of Maureen (Kelly Reilly), a young performer who gets herself involved in a tragic romance with a young soldier; but her character is far too sketchily drawn for this tangent to have any impact. The film fizzles out dramatically halfway through and the screenplay begins running in circles in an attempt to fill time, resulting in the dreadful and farcical sequence in which Mrs Henderson gets herself barred from the theatre and attempts to gain entry in a series of silly disguises - a sequence which marks the film’s nadir.

So thanks heavens for Judi Dench whose performance here is one of her finest. Mrs Henderson is a great character who blows through the movie like a hurricane and Dench is clearly having the time of her life in the role. The film’s witty, Wildean dialogue is perfectly served by her bone-dry delivery and she repeatedly gets big laughs from her perfectly pitched comments. Again, her character is not particularly well developed - there’s a hint of romantic longing for Van Damm which is never explored - but Dench is good enough to make a fully rounded character herself and she’s sorely missed whenever she’s not on screen.

In addition, the film also features a rather perplexing appearance from Will Young. The pop star is making his acting debut here and he hardly distinguishes himself with the handful of lines he’s given, although he’s much more comfortable when taking part in the musical numbers. All in all, not a debut which will encourage him to give up the day job and the more cynical members of the audience may suspect he was cast purely for the purpose of one joke about his character’s sexuality.

Mrs Henderson Presents ends with a whimper after its sparky opening. Stephen Frears’ direction couldn’t be more anonymous and his bland handling doesn’t ever look likely to lift the film out of the lethargic state it adopts halfway through. The film looks smart, with the hazy cinematography evoking a bygone age, and the CGI-enhanced vision of London is realistic enough, but the glossy exterior can’t hide the fact that this is a painfully limp and inoffensive film which clearly uses up all of its inspiration at a very early stage. Judi Dench almost manages to lift the whole enterprise single-handedly with her smashing display; but it’s a film which needs more than one firecracker performance to salvage it, and for this viewer the curtain couldn’t fall quickly enough on Mrs Henderson Presents.