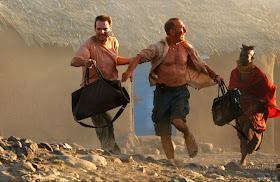 Fernando Meirelles made quite an impact with his directorial debut City of God; a technically proficient and visually arresting depiction of life in the slums of Brazil. The film received plaudits from around the globe and secured Meirelles an Oscar nomination for Best Director. However, I felt it was a seriously overrated case of style over substance and, while Meirelles clearly had a strong grasp of filmmaking technique and a keen eye, his flashy pyrotechnics diluted the emotional power of the central story.


For his second film Meirelles has chosen an adaptation of John le Carré’s thriller The Constant Gardener and again his style proves ill-suited to the source material. Many screen versions of le Carré’s work have been rather stuffy and stiff affairs, so the hiring of Meirelles was an interesting choice. It’s the opportunity to lend an outsider’s point of view to the story, and he certainly does give the material a different texture; utilising shaky, handheld cameras and a washed-out palette to instil the film with a sense of urgency and play on the lead character’s paranoia. It’s an approach that sounds fine in principle but proves problematic in practice.

Meirelles and his screenwriter Jeffrey Caine tell parallel stories here. On the one hand The Constant Gardener is a conspiracy thriller concerning the malpractice of major pharmaceutical companies in Africa, while the other half of the film details in flashback the love between uptight British diplomat Justin Quayle (Ralph Fiennes) and free-spirited activist Tessa (Rachel Weisz). They meet after Justin has just delivered a rather dull speech and Tessa stands up to ask some very angry and pointed questions about Britain’s involvement in Iraq. After everyone has left the hall Justin offers the emotional Tessa some kind words and a drink, and the pair end the day in bed. The film rushes through the unconvincing development of this relationship but Fiennes and Weisz are good enough to sell it and Meirelles fills in many of the gaps during the subsequent flashbacks. Before we know it the pair are married and Tessa asks Justin if she can accompany him on his posting to Africa. He is wary of letting her go anywhere, and rightly so because on an ill-advised trip to a small town she is brutally murdered. Overcome by grief and haunted by suspicions of his wife’s infidelity Justin begins to dig into the details of her life and discovers that she may have been killed for getting a little too close to the truth with her investigations.

It’s not a spoiler to reveal the details of Tessa’s death because it occurs in the first couple of scenes and is the catalyst for Justin’s transformation from passive diplomat to man of action. Meirelles is fortunate to have Ralph Fiennes in the lead as he’s the perfect actor to take the viewer on this character’s journey. At the start of the film Justin is a reserved, taciturn fellow who seems far more comfortable with his many plants than he is in human company; but the love of Tessa liberates something in him and her death galvanises him into doing what should be done regardless of the consequences. Fiennes’ intelligent and sensitive performance keeps the film grounded and makes the various stages of his development plausible. As Tessa, Rachel Weisz is excellent also, despite her character often seeming little more than a mouthpiece for the script’s social concerns.

Those concerns mainly focus on the plight of the African people who are dying of AIDS and TB while the world’s major pharmaceutical companies continue to get richer. The film details a conspiracy in which one company is illegally testing unfinished drugs on poor African villagers with fatal results, but Meirelles fails to make the most of this premise. The Constant Gardener is didactic, preachy and has a serious lack of thrills. Meirelles jumps backwards and forwards around the narrative in telling the two strands of his story but he never finds a comfortable pace for the film and some elements of the plot remain sketchy at best.

The main problem with The Constant Gardener lies with the Brazilian director’s determination to wring as much visual mileage out of the story as possible. In almost every scene the prime motivation seems to be visual impact over narrative coherence; the creative cinematography (colourful and vibrant for Africa, cold and grey for Britain) and probing camera are always looking for some sort of spectacular image, but the meat of the story is often left to trundle along under its own steam without any sort of firm direction behind it. Meirelles stages long conversations in locations as visually impressive as possible, which isn’t such a bad thing but it soon starts to distract the attention from what’s being said in a scene when the director insists on flooding your eyes every few seconds.

Clearly this kind of film is not Meirelles’ forte. The film is uneven and lacks any sort of tension, with an ineffective chase scene thrown in occasionally and a number of repetitive sequences in which an implied threat turns out to be something benign. There are moments when the film appears to be finding its feet but the hyperactive editing continually sets us back at square one, and the film’s increased tendency to grandstand in the latter stages makes the final third something of a slog. I’m sure Meirelles will one day find material which proves a perfect match for his considerable talents. He is a vibrant and interesting filmmaker who needs to start building his films on stronger foundations before making something which really deserves the kind of acclaim his two superficial efforts have received thus far. This film is a contrived and uninvolving thriller which only manages to hold the interest thanks to the sterling efforts of the two leads. It may often look spectacular, but The Constant Gardener never digs below the surface.
Philip Concannon
Share
‹
›
Home
View web version