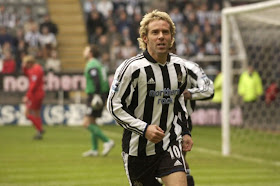 Football and cinema have something of a rocky relationship over the years. While American sports have provided the backdrop to some great films it appears that the beautiful game is the hardest of all to get right, with most football-related films falling prey to hackneyed storytelling, unconvincing action, footballers who can’t act and actors who can’t play football. The latest attempt to bring the sport to the screen is Goal, an ambitious production which will eventually form a trilogy following a young man’s rise from nobody to global superstar. The team behind Goal have made every effort to make this the most realistic football film possible, securing the support of FIFA, The Premier League and Newcastle United to ensure authenticity, but the can it avoid the storytelling pitfalls which have afflicted previous football films?


For the most part, Goal works rather well. While it is hardly an unqualified masterpiece, the film is certainly one of the best attempts at bringing football to the big screen. The screenplay by British sitcom veterans Dick Clement and Ian Le Frenais follows a predictable trajectory; a rags-to-riches tale concerning Santiago Munez (Kuno Becker), a young Mexican living in LA who lives for football alone. His blunt father would rather see him stop wasting his time and dedicate himself to the family business, but Santiago just wants to play and it’s during a local game that he’s spotted by a former Newcastle player on holiday. Glen (Stephen Dillane) likes what he sees and tries to convince Santiago to go to England, promising him that he will organise a trial with his former club if he turns up.

Santiago hardly impresses at the trial, finding the rough-and-tumble of the English game hard to take, and his dream of being a professional footballer looks like it’s about to die, but a couple of team-mates and staff who recognise his raw talent convince Newcastle’s Wenger-like manager (Marcel Iures) to give him a chance. Soon his brilliant ball skills start to make people sit up and take notice but he still has a number of obstacles to overcome. Can he establish himself in the first team? Can he stand up to the team’s bullying hard man (Kieran O’Brien)? Can he win the respect of his father? Can he stay on the straight and narrow or will he be led astray by the likes of playboy striker Gavin Harris (Alessandro Nivola)? And will he win the heart of the lovely team nurse (Anna Friel)?

Well what do you think? It’s giving nothing away to state that the answer to most of the above questions is “yes”. Danny Cannon’s film is a fairytale vision of football in which all of Santiago’s dreams will come true if he works hard, is honest and learns the importance of teamwork. This moral stance is perhaps understandable as the filmmakers would surely have had a tougher getting the support of FIFA and Newcastle United if their lead character was more George Best than Alan Shearer. For this, we should be thankful because the unprecedented access Goal gains within the club is what really gives it the edge over other films in the genre. To see the actors in and around St James’ Park, training with the real players, adds a sheen of legitimacy over the whole enterprise. The match sequences are impressive as well, with shots from Premiership matches cleverly spliced together with footage of the actors filmed in close-up. Of course, the games are all last-minute winners and 30-yard screamers but it generally works extremely well and successfully conveys the excitement of a big match.

But it’s the moments in between the games which are a little less convincing. The scenes where Cannon attempts to develop the narrative or create some drama are clunky and mishandled, and the film experiences particular problems in the second half when Santiago is overloaded with endless personal and professional setbacks in a breathlessly short space of time. Much of the dialogue is dire, sometimes hilariously so, and it seems the filmmakers never saw a sporting cliché they didn’t want to incorporate into the script. It still seems that while the creation of a realistic football environment on film is more achievable than ever, the ability to place a little of that realism in the mouths of well-rounded characters is still beyond cinema’s capabilities.

As the hero of the tale, Kuno Becker looks the part but he’s far more comfortable with the ball than with the acting side of the role. He lacks the emotional range to fully draw us in to his story and you can really see him straining in some of the film’s more taxing scenes. Fortunately, the supporting cast make amends with performances that make the most of their stereotypical roles. Alessandro Nivola gives the best performance in the film with a very funny and endearing display as the reckless and egotistical Gavin Harris, Marcel Iures is a strong presence as the boss and Anna Friel (despite sporting a Geordie accent which tends to wander at a moment’s notice) is pretty and effective as the love interest. There are a couple of pointless but highly amusing cameos too, with Alan Shearer and David Beckham getting speaking parts. Shearer handles his line well enough but Beckham delivers his with all the grace of a Dalek with a sore throat and his rabbit-in-the-headlights expression indicates that he shouldn’t consider giving up the day job just yet.

Goal deserves credit for being a serious attempt at giving us a credible football film, and it will be interesting to see whether they can take it further in the forthcoming instalments. Part II, which is currently filming, sees Santiago at Real Madrid while I understand the third film will take place in the 2006 World Cup. Whatever happens with the rest of the trilogy, the first part is a decent launching pad and hopefully the filmmakers can iron out the annoying flaws which remain; and if they do, then perhaps we’ll finally have a football film to cheer about. Now that really does sound like a fairytale.